On Being Young—a Woman—and Colored by Marita O. Bonner (1925) 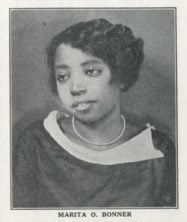 Marita Odette Bonner (1899 – 1971) was a short story writer, playwright, and essayist. Between 1925 and 1927 she produced a great number of short stories featuring characters from varied cultures navigating urban life. She became noted for two prize-winning essays — “On Being Young—A Woman—and Colored” (1925), presented here, and “Drab Rambles” (1927).

One of the earliest Black students at Radcliffe College, she was academically talented as well as a gifted pianist and composer. Upon her 1922, graduation, when she was named “Radcliffe’s Beethoven,” Bonner continued to blossom, becoming a noted figure in the Harlem Renaissance movement.

In the late 1920s, Bonner wrote three plays, the best known of which was The Purple Flower (1928). Her writings often dealt with the challenges of being Black in a racist society, a theme exemplified in the essay that follows.

“On Being Young—a Woman—and Colored” was a first prize winner in an annual contest sponsored by The Crisis (the journal of the NAACP, which had a decided literary bent). Originally published in their December 1925 issue, it is now in the public domain.

At the time of this essay’s publication, the prolific Marita Bonner was working as an English teacher at the Armstrong High School in Washington, D. C. She continued to write short fiction until 1941, after which she focused on raising her three children as well as teaching high school in Chicago.

On Being Young — a Woman — and Colored by Marita O. Bonner

You start out after you have gone from kindergarten to sheepskin covered with sundry Latin phrases.

At least you know what you want life to give you. A career as fixed and as calmly brilliant as the North Star. The one real thing that money buys. Time. Time to do things. A house that can be as delectably out of order and as easily put in order as the doll-house of  “playing-house” days. And of course, a husband you can look up to without looking down on yourself.

Somehow you feel like a kitten in a sunny catnip field that sees sleek, plump brown field mice and yellow baby chicks sitting coyly, side by side, under each leaf. A desire to dash three or four ways seizes you.

That’s Youth. But you know that things learned need testing—acid testing—to see if they are really after all, an interwoven part of you. All your life you have heard of the debt you owe “Your People” because you have managed to have the things they have not largely had.

So you find a spot where there are hordes of them—of course below the Line—to be your catnip field while you close your eyes to mice and chickens alike.

If you have never lived among your own, you feel prodigal. Some warm untouched current flows through them—through you— and drags you out into the deep waters of a new sea of human foibles and mannerisms; of a peculiar psychology and prejudices. And one day you find yourself entangled—enmeshed—pinioned in the sea- weed of a Black Ghetto.

Not a Ghetto, placid like the Strasse that flows, outwardly unperturbed and calm in a stream of religious belief, but a peculiar group. Cut off, flung together, shoved aside in a bundle because of color and with no more in common.

Unless color is, after all, the real bond. Milling around like live fish in a basket. Those at the bottom crushed into a sort of stupid apathy by the weight of those on top. Those on top leaping, leaping; leaping to scale the sides; to get out. There are two “colored” movies, innumerable parties—and cards. Cards played so intensely that it fascinates and repulses at once.

Movies. Movies worthy and worthless—but not even a low-caste spoken stage. Parties, plentiful. Music and dancing and much that is wit and color and gaiety.

But they are like the richest chocolate; stuffed costly chocolates that make the taste go stale if you have too many of them. That make plain whole bread taste like ashes.

There are all the earmarks of a group within a group. Cut off all around from ingress from or egress to other groups. A sameness of type. The smug self-satisfaction of an inner measurement; a measurement by standards known within a limited group and not those of an unlimited, seeing, world … Like the blind, blind mice. Mice whose eyes have been blinded.

Strange longing seizes hold of you. You wish yourself back where you can lay your dollar down and sit in a dollar seat to hear voices, strings, reeds that have lifted the World out, up, beyond things that have bodies and walls. Where you can marvel at new. marbles and bronzes and flat colors that will make men forget that things exist in a flesh more often than in spirit. Where you can sink your body in a cushioned seat and sink your soul at the same time into a section of life set before you on the boards for a few hours.

For you know that—being a woman— you cannot twice a month or twice a year, for that matter, break away to see or hear anything in a city that is supposed to see and hear too much.

That’s being a woman. A woman of any color. You decide that something is wrong with a world that stifles and chokes; that cuts off and stunts; hedging in, pressing down on eyes, ears and throat. Somehow all wrong.

You wonder how it happens there that — say five hundred miles from the Bay State — Anglo Saxon intelligence is so warped and stunted.

How judgment and discernment are bred out of the race. And what has become of discrimination? Discrimination of the right sort. Discrimination that the best minds have told you weighs shadows and nuances and spiritual differences before it catalogues. The kind they have taught you all of your life was best: that looks clearly past generalization and past appearance to dissect, to dig down to the real heart of matters. That casts aside rapid summary conclusions, drawn from primary inference, as Daniel did the spiced meats.

Why can’t they then perceive that there is a difference in the glance from a pair of eyes that look, mildly docile, at “white ladies” and those that, impersonally and perceptively — aware of distinctions — see only women who happen to be white?

Why do they see a colored woman only as a gross collection of desires, all uncontrolled, reaching out for their Apollos and the Quasimodos with avid indiscrimination? Why unless you talk in staccato squawks — brittle as sea-shells — unless you “champ” gum — unless you cover two yards square when you laugh —unless your taste runs to violent colors — impossible perfumes and more impossible clothes —are you a feminine Caliban craving to pass for Ariel?

An empty imitation of an empty invitation. A mime; a sham; a copy-cat. A hollow re-echo. A froth, a foam. A fleck of the ashes of superficiality?

Everything you touch or taste now is like the flesh of an unripe persimmon … Do you need to be told what that is being …? Old ideas, old fundamentals seem worm-eaten, out-grown, worthless, bitter; fit for the scrap-heap of Wisdom.

What you had thought tangible and practical has turned out to be a collection of “blue-flower” theories. If they have not discovered how to use their accumulation of facts, they are use- less to you in Their world. Every part of you becomes bitter.

You long to explode and hurt everything white; friendly; unfriendly. But you know that you cannot live with a chip on your shoulder even if you can manage a smile around your eyes—without getting steely and brittle and losing the softness that makes you a woman.

For chips make you bend your body to balance them. And once you bend, you lose your poise, your balance, and the chip gets into you. The real you. You get hard … And many things in you can ossify … And you know, being a woman, you have to go about it gently and quietly, to find out and to discover just what is wrong. Just what can be done.

You see clearly that they have acquired things. Money; money. Money to build with, money to destroy. Money to swim in. Money to drown in. Money.

An ascendancy of wisdom. An incalculable hoard of wisdom in all fields, in all things collected from all quarters of humanity. A stupendous mass of things. Things.

So, too, the Greeks … Things. And the Romans … And you wonder and wonder why they have not discovered how to handle deftly and skillfully, Wisdom, stored up for them — like the honey for the Gods on Olympus — since time unknown.

So you find, they have shut Wisdom up and have forgotten to find the key that will let her out They have trapped, trammeled, lashed her to themselves with thews and thongs and theories. They have ran- sacked sea and earth and air to bring every treasure to her. But she sulks and will not work for a world with a whitish hue because it has snubbed her twin sister, Understanding.

You see clearly — off there is Infinity — Understanding. Standing alone, waiting for someone to really want her. But she is so far out there is no way to snatch at her and drag her in.

So — being a woman — you can wait. You must sit quietly without a chip. Not sodden — and weighted as if your feet were cast in the iron of your soul. Not wasting strength in enervating gestures as if two hundred years of bonds and whips had really tricked you into nervous uncertainty.

But quiet; quiet. Like Buddha — who brown like I am — sat entirely at ease, entirely sure of himself; motionless and knowing, a thousand years before the white man knew there was so very much difference between feet and hands.

Motionless on the outside. But inside? Silent. Still … “Perhaps Buddha is a woman.”

So you too. Still; quiet; with a smile, ever so slight, at the eyes so that Life will flow into and not by you. And you can gather, as it passes, the essences, the overtones, the tints, the shadows; draw understanding to your self. And then you can, when Time is ripe, swoop to your feet — at your full height — at a single gesture. Ready to go where? Why … Wherever God motions.