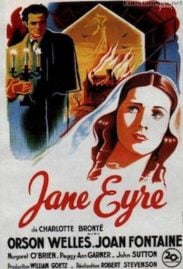 How can Charlotte Brontë’s masterwork be crammed into a time frame of just over an hour and a half? This feat of compression was accomplished by Hollywood for the 1943 film Jane Eyre.

The film was released at the end of 1943 in Britain, and had its American release of February, 1944.

Nearly a quarter of the film covers young Jane’s torturous experience at the Lowood School, based on the actual place that Charlotte and her sisters attended in Yorkshire. The experience proved fatal for one of the Brontë sisters, Maria, who became gravely ill and died.

Maria was likely the inspiration, if one can call it that, for the character of Helen Burns, one of Jane’s fellow students who becomes a dear friend. Helen is played by a young and lovely Elizabeth Taylor. She’s uncredited in the cast, but her breakthrough role would come soon after as the star of National Velvet (1944). 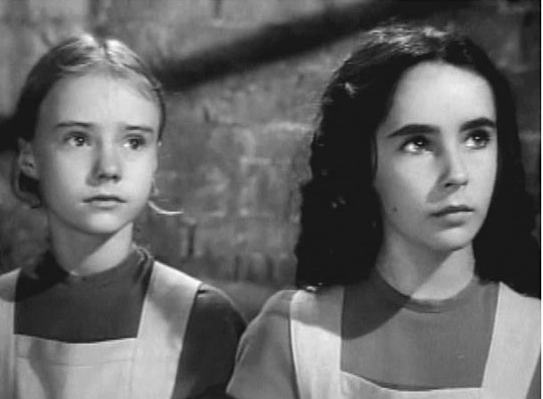 The film is dark and moody, even gloomy, with black clouds always swirling, in keeping with the gothic mood of the story. Even interiors are dark and dreary. There are the attendant bursts of overly dramatic background music typical of that era’s films.

The casting is excellent, with Joan Fontaine as Jane Eyre — a character likely very much based on Charlotte Brontë herself — and Orson Welles as the peculiar, brooding, yet ultimately redeemable Mr. Rochester. 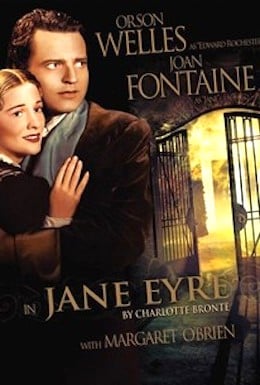 The best part of the film is seeing actual passages from the book appear on the screen, such as this one:

“What sort of man was this master of Thornfield — so proud, sardonic, and harsh? Instinctively I felt that his malignant mood had its source in some cruel cross of fate. I was to learn that this was indeed true, and that beneath the harsh mask he assumed lay a tortured soul, fine, gentle, and kindly.”

Yes, gentle and kindly — this she writes before finding out that the man she has fallen in love with has stashed his mentally ill wife in the attic — Bertha Antoinetta Mason is the proverbial madwoman in the attic. 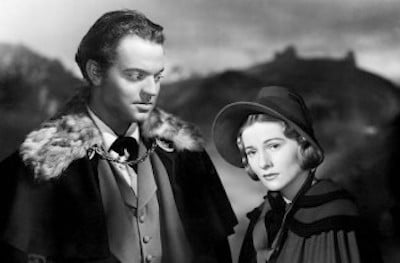 Rushed pacing while at Thornfield

There’s Bertha’s first attempt to set the castle ablaze, Edward Rochester’s declaration of love to Jane after spurning a glamorous, gold-digger, and his confession the alter that he already has a wife, after a last-minute “I object!” His plea to Jane to live with him as his wife, her refusal, her departure.

The rest of the movie speeds through the original plot, all but eliminating Jane’s quest to become her own person in the world before considering a return to Thornfield. After all, there are but twenty minutes or so left of the film. For those who don’t know the story, we’ll stop short of giving away spoilers. 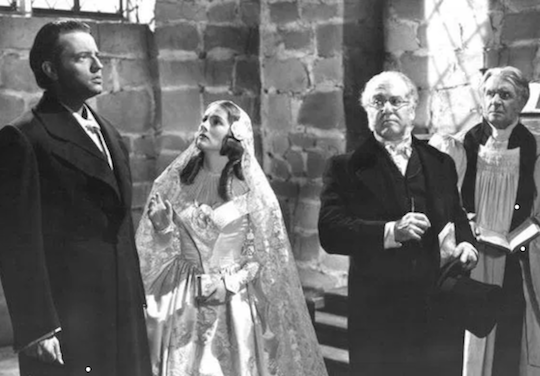 Not the best version, but you can watch for free

There are those who love this film, but as an adaptation, it doesn’t live up to 1940 film interpretation of Rebecca nor 1939’s Wuthering Heights, in this genre of moody gothics. It also didn’t receive the accolades or award nominations that these related films did, for example, not a single Academy Award nomination.

The February 4, 1944 review in the New York Times encapsulates a typical mixed view of the film:

“No depths of consuming passion are plumbed very diligently in this film. No haunting pathos pervades it. The producers had little time for that.

With Orson Welles playing Rochester, the anguished hero of the book, they mainly gave way to the aspects of morbid horror to be revealed. They tossed Mr. Welles most of the story and let him play it in his hot, fuliginous style.

As a consequence, the heroine of the classic, little Jane, played by Joan Fontaine, is strangely obscured behind the dark cloud of Rochester’s personality.True, this accounts for some distortion of Miss Brontë’s full-bodied book.

It makes Jane a sort of bloodless Trilby from the time Rochester sweeps upon the scene. She becomes, as it were, a hypnotic under his Svengali spell, and exists in a world of shapeless horrors which are governed entirely by him.”

Contemporary reviews of the film have generally tended to be kinder than original, mixed reviews, though this 2010 review on Nick’s Flicks nails the film’s deficits:

“The 96-minute running time offers sufficient warning that this Fox version of Jane Eyre won’t encompass all the incidents or characters, much less the nuances of Charlotte Brontë’s immortal novel, and if Jane and Rochester have never registered as literature’s most obviously compatible couple, tremulous Joan Fontaine and cocky-steer Orson Welles are even less so. But what this Jane Eyre sometimes lacks in rhythm, pace, or consistency it more than compensates in aggressive atmospherics.”

There are later film adaptations of Jane Eyre that are an improvement over this one , but better yet, read the book or listen to an unabridged version on audio. 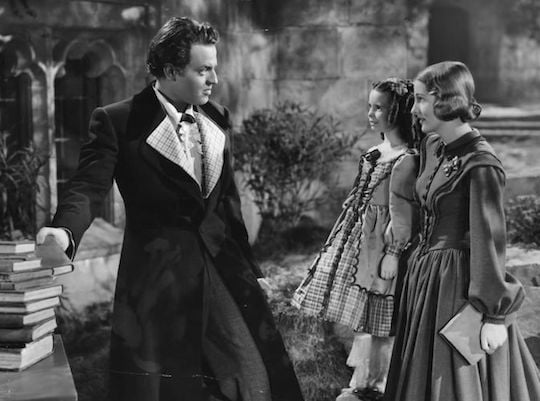