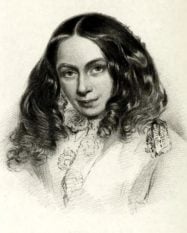 “Mother and Poet” is a poem by esteemed British poet Elizabeth Barrett Browning (1806 – 1861). Written in a confessional manner, it’s a mother’s lament for having lost two sons serving in war. Though this poem isn’t autobiographical, Elizabeth had endured the sudden death of a beloved brother, and perhaps this allowed her to effectively convey the trauma of losing loved ones.

Suffused with grief and guilt, the mother narrating the poem exalts the bravery of her soldier sons doing battle in Italy. At the same time, it conveys the mother’s pain of the personal loss.

“Mother and Poet” was one of Elizabeth Barrett Browning’s later poems, published in Last Poems (1862). If she wasn’t speaking of herself in this poem, to who might it have been referring?

A note in Last Poems explains that it was inspired by the true story of Baroness Olimpia (sometimes referred to as “Laura”) Savio (1815–1889), who was indeed a mother, poet, and writer from Turin, Italy. Both of her sons died in the battle of the Risorgimento, or Italian reunification.

More poetry by Elizabeth Barrett Browning on this site: 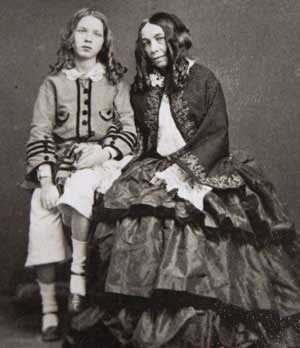 
II.
Yet I was a poetess only last year,
And good at my art, for a woman, men said;
But this woman, this, who is agonized here,
— The east sea and west sea rhyme on in her head
For ever instead.


III.
What art can a woman be good at ? Oh, vain!
What art is she good at, but hurting her breast
With the milk-teeth of babes, and a smile at the pain ?
Ah boys, how you hurt! you were strong as you pressed,
And I proud, by that test.


IV.
What art’s for a woman ? To hold on her knees
Both darlings! to feel all their arms round her throat,
Cling, strangle a little! to sew by degrees
And ‘broider the long-clothes and neat little coat;
To dream and to do at.


V.
To teach them … It stings there!I made them indeed
Speak plain the word country. I taught them, no doubt,
That a country’s a thing men should die for at need.
I prated of liberty, rights, and about
The tyrant cast out.


VI.
And when their eyes flashed … O my beautiful eyes! …
I exulted; nay, let them go forth at the wheels
Of the guns, and denied not. But then the surprise
When one sits quite alone! Then one weeps, then one kneels!
God, how the house feels!


VII.
At first, happy news came, in gay letters moiled
With my kisses, — of camp-life and glory, and how
They both loved me; and, soon coming home to be spoiled
In return would fan off every fly from my brow
With their green laurel-bough.


VIII.
Then was triumph at Turin: Ancona was free!’
And some one came out of the cheers in the street,
With a face pale as stone, to say something to me.
My Guido was dead! I fell down at his feet,
While they cheered in the street.


IX.
I bore it; friends soothed me; my grief looked sublime
As the ransom of Italy. One boy remained
To be leant on and walked with, recalling the time
When the first grew immortal, while both of us strained
To the height he had gained.


X.
And letters still came, shorter, sadder, more strong,
Writ now but in one hand, I was not to faint, —
One loved me for two — would be with me ere long :
AndViva l’ Italia! — he died for, our saint,
Who forbids our complaint.”
XI.
My Nanni would add, he was safe, and aware
Of a presence that turned off the balls, — was imprest
It was Guido himself, who knew what I could bear,
And how ’twas impossible, quite dispossessed,
To live on for the rest.”


XII.
On which, without pause, up the telegraph line
Swept smoothly the next news from Gaeta : —Shot.
Tell his mother. Ah, ah, his, ‘ their ‘ mother, — not mine, ‘
No voice says “My mother” again to me. What!
You think Guido forgot ?


XIII.
Are souls straight so happy that, dizzy with Heaven,
They drop earth’s affections, conceive not of woe ?
I think not. Themselves were too lately forgiven
Through THAT Love and Sorrow which reconciled so
The Above and Below.


XIV.
O Christ of the five wounds, who look’dst through the dark
To the face of Thy mother! consider, I pray,
How we common mothers stand desolate, mark,
Whose sons, not being Christs, die with eyes turned away,
And no last word to say!


XV.
Both boys dead ? but that’s out of nature. We all
Have been patriots, yet each house must always keep one.
‘Twere imbecile, hewing out roads to a wall;
And, when Italy ‘s made, for what end is it done
If we have not a son ?


XVI.
Ah, ah, ah! when Gaeta’s taken, what then ?
When the fair wicked queen sits no more at her sport
Of the fire-balls of death crashing souls out of men ?
When the guns of Cavalli with final retort
Have cut the game short ?


XVII.
When Venice and Rome keep their new jubilee,
When your flag takes all heaven for its white, green, and red,
When you have your country from mountain to sea,
When King Victor has Italy’s crown on his head,
(And I have my Dead) —


XVIII.
What then ? Do not mock me. Ah, ring your bells low,
And burn your lights faintly!My country is there,
Above the star pricked by the last peak of snow :
My Italy ‘s THERE, with my brave civic Pair,
To disfranchise despair!


XIX.
Forgive me. Some women bear children in strength,
And bite back the cry of their pain in self-scorn;
But the birth-pangs of nations will wring us at length
Into wail such as this — and we sit on forlorn
When the man-child is born.