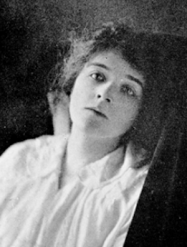 Hazel Hall (1886 –1924) was an American poet much beloved in her adopted state of Oregon. She was often referred to, for various reasons, as “The Emily Dickinson of Oregon.” Though she has been widely anthologized on both sides of the Atlantic, she’s no longer well known, yet deserves another look.

By 1910, the city of Portland, Oregon was a lively city of commerce and community. An active population of well over 207,000 established it as the largest city in the Pacific Northwest.

From the port side along the Ocean-accessible Columbia River to the West Bank of the roaring Willamette, people spent their days working in factories, window-shopping, strolling hand-in-hand, riding trolleys, and bustling about in all the ways that folks in large cities have always done.

Though Portland was host to much lively activity and trade, young Hazel Hall couldn’t take part in any of it. Being confined to a wheelchair from the age of twelve, she sat in the upper room of her home watching life in its myriad of shapes and sizes parade before her.

With her limited mobility, Hazel couldn’t stand up to peer out her window, so she fashioned a hand-mirror in such a way as to be able to view the streets below in the reflection of the glass.

Hazel Hall was born on February 7, 1886 in St. Paul, Minnesota to Montgomery and Mary Garland Hall. She had two sisters, Ruth and Lulu. The family moved to Portland, Oregon when Hazel was yet a toddler. Though young Hazel romped and played just as exuberantly as any other child, she fell ill with scarlet fever at age twelve. She was disabled ever afterward and confined to a wheelchair.

Not to be discouraged by her strict confinement, Hazel spent her days under the light of her window sewing and adorning fine linens and bridal robes, baby clothes, lingerie, Bishop’s cuffs, and christening gowns. These items were so beautifully embroidered that she became one of the favorite seamstresses of many of Portland’s social elite in the West Hills, bringing her money enough for her to earn her keep.

Hazel’s sister, Ruth, a librarian in the Portland School District, borrowed numerous books for Hazel to read. From classics to science, Hazel read everything that her sister brought home for her, but developed a particular interest in poetry. Emily Dickinson, who passed away the same year of Hazel’s birth, was counted among her favorite poets, along with Robert Frost and Edna St. Vincent Millay

Hazel had always occupied herself by writing and by the age of 30, her work was published in the Boston Evening Transcript. Her poem, To An English Sparrow is a cadent piece of rhyme and meter deep in feeling. The life of the poem resembles the life of a sewing needle, which Hall knew the ins and outs of very well.

To an English Sparrow (excerpt)

Little feathered tufts of gray,
Skipping blithely through the day —
Never resting,
Yet protesting
In your querulous, quick way —
Little sparrow;
You who would the woodland spurn —
Bird-prized haunts of leaf and fern —

With your chippy-chip chip chirp—
On your wing or tripping feet —
Ever lightly
Always sprightly
Comes your note so nearly sweet,
English sparrow

Following the success of having a poem published in The Boston Evening Transcript, Hazel Hall’s poems appeared in such prestigious magazines as The Century Magazine, Harpers Magazine, The New Republic, The Nation, Yale Review, and Literary Review.

In 1920, Hazel’s poem, Three Girls, was chosen as one of the five best poems of the year by critic William Stanley Braithwaite.

Three school girls pass this way each day,
Two of them go in the fluttery way
Of girls, with all that girlhood buys:
But one goes with a dream in her eyes.

Two of them have the eyes of girls
Whose hair is learning scorn of curls,
But the eyes of one are like wide doors
Opening out on misted shores,

And they will go as they go today
On to the end of life’s short way;
Two will have what living buys,
And one will have the dream in her eyes.

Two will die as many must,
and fitly dust will welcome dust;
But dust has nothing to do with one—
She dies as soon as her dream is done.

Acquiring only a fifth grade education before becoming fettered to a wheelchair failed to prevent Hazel Hall from reaching out to a world in which she couldn’t fully participate. With her poetry, she managed to inspire not only poetic appreciation, but also admiration for the simpler things that life brings one’s way.

Hazel’s interest in philosophy inspired her to think deeply about humanity and helped her to resist the temptation to become overwhelmed by her circumstances. In many ways it was her circumstances which she considered to be advantageous to writing poetry, for the solitude that she experienced aided in not only thinking through iambs and meters, but also in creating artistic presentations of the seemingly routine. 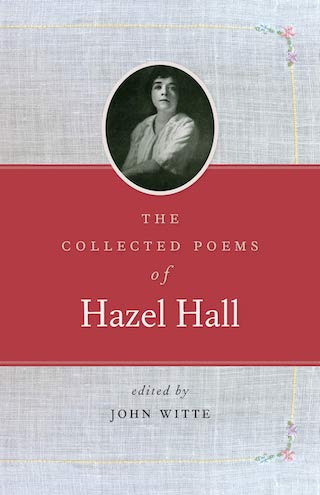 Many of her poems were included in numerous anthologies, gaining her popularity even in England. Her first book, Curtains, was published in 1921, her second book, Walkers, in 1923. In 1928 her third book, Cry of Time, would be published posthumously by her sister, Ruth. A group of her needlework poems within the pages of Curtains gained Hall the Young Poets Prize from Poetry magazine.

When Hazel’s eyesight began to fail her, she no longer wrote poetry about sewing, as she did in Curtains, but instead began to write more about the things she spied from the confines of her room. Thus, Walkers, came to be.

The editors of The Bookman literary journal gave Hazel’s newest book much praise within its pages of the August 1923 issue, calling the poems “genuine, individual, and very lovely,” including in their review a quote from her poem, Protection:

I have envied, I have pitied
Wrapped their sorrows over me
Like a shawl, to keep from knowing
Cold that is colder than the sea.

At the age of thirty-eight, Hazel Hall succumbed to an illness and passed away in the family home. Within eight short years, from 1916 to 1924, she had managed to touch the hearts of many readers with her poems. Upon her death on May 11, 1924, her obituary was on the front page of the Oregonian newspaper with the headline:

“SWEET VOICE OF HAZEL HALL IS HUSHED BY DEATH.”

Yet, it wasn’t hushed for good, thanks to John Witte, English Professor at the University of Oregon. In 2000, Witte collected all three of Hazel Hall’s books into one volume and published (Northwest Readers) The Collected Poems of Hazel Hall, making it possible for her voice to continue ringing out loud, strong, and sweet, teaching us all how to live life as fully as we are able.

The Oregon Book Award for poetry is named for Hazel Hall and William Stafford (the Stafford/Hall Award for Poetry). The award’s sponsor, Literary Arts, referred to her as “The Emily Dickinson of Oregon.”

Hazel Hall’s home at 106 NW 22nd Place in Portland is listed on the National Register of Historic Places as the Hazel Hall House. In 1995 the Oregon Cultural Heritage Commission built a memorial park, or poetry garden, next to the Hazel Hall House. The park is home to three of her poems carved in granite; Light Sleep, Things That Grow, and The Listening Macaws.

Contributed by Tami Richards. This post was originally published on HerRhetoric. Reprinted with permission.

2 Responses to “Discovering Hazel Hall, “The Emily Dickinson of Oregon””