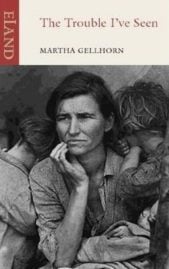 They capture the emotional, financial, and spiritual devastation wrought by the financial collapse in America in the 1930s.

Unemployment, loss of hope, and abject poverty are captured by a woman who would go on to become one of the greatest war correspondents of the twentieth century.

In this documentary-style fiction, Gellhorn demonstrates the kind of vivid writing she would later apply to her reporting — direct, vivid, and showing compassion to the plight of everyday people caught in circumstances beyond their control.

From the original review of The Trouble I’ve Seen: Four Stories from the Great Depression by Martha Gellhorn in The Wilkes-Barre Record by John Selby, October, 1936:

Should you pick up The Trouble I’ve Seen by Martha Gellhorn, skip the H.G. Wells preface and plunge right in. If you can take your eyes off the page you’re stronger than this reader. But they may blur with tears, even if you are strong.

Miss Gellhorn is a young woman who looks, judging from the half-tone on the jacket of her book, as if she might be a debutante straight off the society page.

But actually she is a writer Harry Hopkins found and sent around the country to do a report on living conditions among the unemployed. She went to a great many places and talked with a great many people.

There are four long stories in the book, one of which is divided two ways. The concluding one is called “Ruby,” and after reading it this department apologizes for having called several other bits of writing “searing.”

We didn’t know what the word could mean when we used it. This is the story of a little girl of thirteen who sells herself to buy candy and ten cent store jewelry and (to her) exotic canned goods to eat.

It could not possibly offend any intelligent person, but it can, and probably will, reduce a good many readers to tears and frightened exasperation with a world which can produce such things. 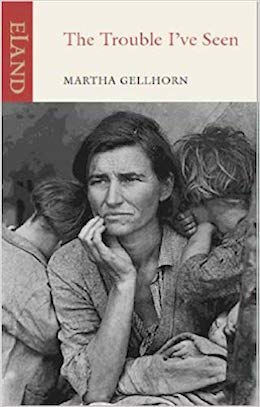 The group of three stories called “Mrs. Maddison” tells about a Southern woman who “managed.” She was pretty unlucky. Her children just didn’t amount to anything, and she had nothing with which to work beyond her hands and her personal integrity.

When she got what she had always wanted, a shack and some land she could call her own, her children defeated her. At the end she is once more confronted with defeat — and yet she makes it a victory.

The other stories are as good. Perhaps superb is the better word. 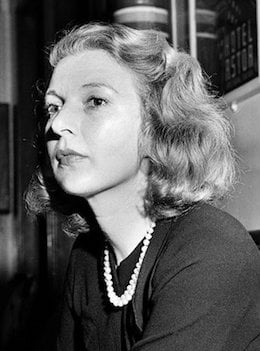 More about The Trouble I’ve Seen by Martha Gellhorn