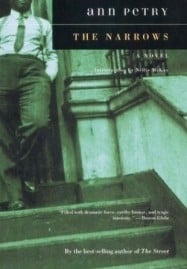 The Narrows by Ann Petry (1953) was the third and last full-length novel for adult readers by the groundbreaking author of the 1946 blockbuster, The Street.

Though Petry would never replicate the incredible success of The Street, which became the first novel by an African-American woman to sell more than a million copies, The Narrows is a solid entry into the canon of an American author whose talent deserves to be more widely recognized.

A contemporary view of The Narrows

“Like The Street and Country Place, The Narrows is concerned with the way multiple perspectives determine a community’s identity. But rather than focus on the composite reality that emerges from many individual viewpoint, as Country Place does, Petry’s third novel examines the ways that a community’s identity evolves from the collaborative (and often combative) relationship between private opinions and public records.

We come to know the Narrows, a black neighborhood that is increasingly segregated from the surrounding city of Monmouth, Connecticut, as an amalgam of individual perceptions and public accounts.

The viewpoints of Abbie Crunch, Link Williams, Malcolm Powther, and Monmouth Chronicle editor Peter Bullock are juxtaposed with stories and photographs in the Chronicle and the New York tabloids.

While the press fails to capture the whole truth about the Narrows, it succeeds in altering the way people, both residents and outsiders, perceive the community.

It takes a peripheral character to recognize the role that newspapers have played in determining Link’s fate: Miss Doris, Frances Jackson’s voluble housekeeper, declares that the events leading to Link Williams’s murder ‘were purely like a snowball and everybody give it a push, that two-cent newspaper give it the last big push.'” 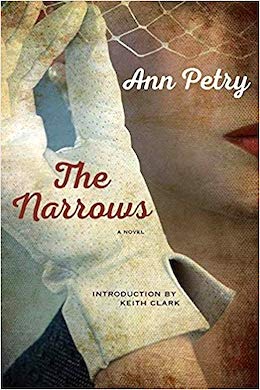 Neither The Narrows nor Country Place achieved nearly the blockbuster sales of The Street. Still,The Narrows was well reviewed and confirmed Petry’s place in American letters. Here’s a typical review from the time of the book’s publication in 1953:

From the original review in The Tucson Daily Citizen, August, 1953: Race Conflict Plays a Part in Petry Novel, The Narrows

Novels which deal with race and color conflicts can be relied upon to raise the reader’s blood pressure, even when they are only halfway well done. These are explosive topics, on which almost nobody is neutral. When a good writer takes a theme like this, as Ann Petry does in The Narrows, hold on to your hat.

No, it is not a novel of the south. The scene is a small New England town, in which the races have learned to live with each other. But when Camilo Sheffield, a blond who might have stepped out of the page of Vogue, becomes involved in a romantic relationship with Link Williams, a young college-educated Negro with a Barrymore profile, it requires no second sight to predict trouble.

Old mistrusts and buried hatreds are revived, and an ugly spirit gets loose in the town. For awhile all goes well as the couple have their assignations, in New York and closer to home. Inevitably, however, the bomb explodes and engulfs everyone.

This bare outline does less than justice to the complexity of Miss Petry’s conception. The story worked out on a large scale, with a big cast of characters and a variety of subplots. Through it all moves the author, with the ease of an expert who knows everything is under control.

The book is long (428 pages) but always readable. Some of its length is due to the author’s determination to explore every thought in her characters’ minds, but then the reader is interested in these persons anyway. As in her earlier novel, The Street, Miss Petry is speaking whereof she knows. The Narrows confirms the promise of that impressive first novel.