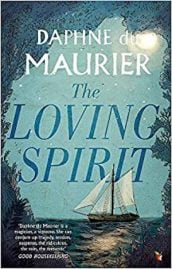 The title was inspired by the name of a poem by Emily Brontë. It’s well known that du Maurier was greatly inspired by the Brontë sisters; her masterwork, Rebecca (1938), has echoes of Jane Eyre.

Beginning in the early 1800s, The Loving Spirit tells the story of the Coombes family, and is mainly set in Cornwall, a part of England in which the author spent much of her life. Janet Coombes marries her cousin, Thomas Coombes, who is a shipbuilder. The novel follows the adventures and trials of this family for four generations.

A fascinating fact: The Loving Spirit captured the attention of a young British army major, Frederick A.M. “Boy” Browning. Resolving to meet its author, he traveled to find her. They met the following year, and married a few months later, in 1932.

The Loving Spirit was well received and launched what would become a stellar career. This book, along with du Maurier’s subsequent works, have offered generations of readers books that are rich historical detail, with elements of romance and intrigue. Since her fictional works shaded into the realm of popular fiction in their time,  they were sometimes criticized as lacking in depth or intellect. That view that has since been revised.

From the 2003 Time-Warner Books UK edition of The Loving Spirit:

“Cornwall, 1900s. Plyn Boat Yard is a hive of activity, and Janet Coombe longs to share in the excitement of seafaring: to travel, to have adventures, to know freedom. But constrained by the times, instead she marries her cousin Thomas, a boat builder, and settles down to raise a family.

Janet’s loving spirit — the passionate yearning for adventure and for love — is passed down to her son, and through him to his children’s children. As generations of the family struggle against hardship and loss, their intricately plotted history is set against the greater backdrop of war and social change in Britain.

Her debut novel established du Maurier’s reputation and style with an inimitable blend of romance, history and adventure.”

A 1931 review of The Loving Spirit by Daphne du Maurier

From the original review in the Province Sun, November 1, 1931: Rebecca West, in her criticism of this book, describes it as “a whopper of a romantic novel in the vein of Emily Brontë.” That it is. It is also in the vein of George du Maurier, grandfather of the authoress; it’s also a legitimate descendant of Peter Ibbetson.

It will be something of a relief to anyone who is wearied with the intense psychological exactitudes of modern fiction to plunge into a tale so romantic and full of life, because, apart from satisfying the average intelligent person’s instinct —the instinct that announces itself very early in life — romance is kin to poetry, and in poetry can be found here and there a flash of insight that penetrates through and beyond the muddle of everyday life.

This book contains the curious blend of instinct, knowledge, and intuition that marks the genuine teller of tales. As the first novel by a young writer, it foretells a future of pleasurable prospects.

“Please God, make me a lad afore I’m grown,” was Janet Coombe’s early prayer, but no miracle happened. She remained a girl — restless and hoydenish, with a loving, unsatisfied spirit — mad an affectionate and successful marriage with her cousin, Thomas Coombe, and bore him six children. This was in 1830 and subsequent years.

Of these children, Samuel and Mary, the two oldest, and Herbert, the fourth, were hard-working, estimable souls, just like their father. Joseph, the third child, was twin spirit with his mother. Philip, the fifth child, was a stranger in the family. Elizabeth, the sixth, was a happy blend of both parents.

Here Miss du Maurier shows her powers. She recognizes the law of polarity. The violent cleaving of spirit to spirit, the very closeness of the tie between Janet and Joseph sets up a counterbalancing force.

Desiring above all things spiritual union with some one person and finding it only in her second son, Janet herself gives birth to his destroyer. Philip, her fourth son, from his childhood to his old age, when Joseph’s grandchild is all that is left to remind him closely of the past, goes his secret way to smash the loving transmissible spirit from whose warmth he feels himself shut out.

Christopher, Joseph’s son, feels the weight of his Uncle Philip’s hatred. Jennifer, Christopher’s daughter, almost dies of it. The good nonentities of the family are swept aside into bewildered poverty by it. It remains for Elizabeth, her excellent husband and their son and grandson to throw in their weight, and the end of the book finds the loving spirt of the time being at rest from its violent journeying.

There is a great quality of courage here; the tale is cast in a large mold. With a feeling of personal exile, the reader is dragged into London for a time, but the main events happen in Cornwall, on the coast, where the English Channel starts at one end of its stormy passage between the Atlantic and the North Sea. They could not be placed more suitably. 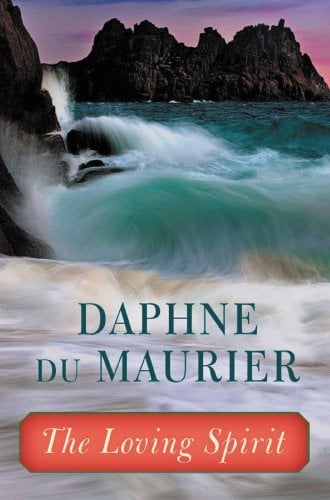 Quotes from The Loving Spirit

“She gave to both Thomas and Samuel her natural spontaneity of feeling and a great simplicity of heart; but the spirit of Janet was free and unfettered, waiting to rise from its self-enforced seclusion to mingle with intangible things, like the wind, the sea, and the skies, hand in hand with the one for whom she waited. Then she, too, would become part of these things forever, abstract and immortal.”

“Dust unto dust. There was no reason then for life—it was only a fraction of a moment between birth and death, a movement upon the surface of water, and then it was still. Janet had loved and suffered, she had known beauty and pain, and now she was finished—blotted by the heedless earth, to be no more than a few dull letters on a stone.”

“Though Thomas liked to think he had his own way over things, it was generally Janet who had the last say in the matter. She would fling a word at her husband and no more, and he would go off to his work with an uneasy feeling at the back of his mind that she had won. He called it ‘giving in to Janie,’ but it was more than that, it was unconscious subservience to a quieter but stronger personality than his own.”

“The child destined to be a writer is vulnerable to every wind that blows. Now warm, now chill, next joyous, then despairing, the essence of his nature is to escape the atmosphere about him, no matter how stable, even loving. No ties, no binding chains, save those he forges for himself.

Or so he thinks. But escape can be delusion, and what he is running from is not the enclosing world and its inhabitants, but his own inadequate self that fears to meet the demands which life makes upon it. Therefore create. Act God. Fashion men and women as Prometheus fashioned them from clay, and, by doing this, work out the unconscious strife within and be reconciled.”

More about The Loving Spirit by Daphne du Maurier