An Analysis of du Maurier’s Rebecca, A Worthy ‘Eyre’ Apparent 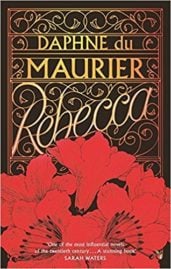 Contributed by Jonathan Yardley, the longtime Washington Post book critic emeritus, this analysis of Rebecca by Daphne du Maurier explores how it may have been influenced or inspired by Jane Eyre. Almost from its inception in 18th-century England,  Charlotte Brontë‘s gothic novel has been adored by readers; critics, not so much.

For the fastidious ladies and gentlemen of the quarterly reviews and academe, its central conventions — nature red in tooth and claw; haunted castles atop windswept moors; defenseless young women at the mercy of strange, obsessed men with terrible secrets; bondage, imprisonment, sexual torment and ambiguity, raging fires — are simply too too.

But readers love it, as well they should, for in the best gothic fiction, realism and romance join forces to create a territory somewhere between this world and some other in which almost everything is slightly, deliciously over the top.

The popularity of gothic fiction

Gothic fiction has produced oceans of stuff that can’t be credited with much more than entertainment value, stuff that usually ends up in airport bookshops and on bestseller lists. Think Stephen King.

But gothic fiction also has produced a few of the indisputable masterpieces of the English language, from Mary Shelley‘s Frankenstein to Charlotte Brontë‘s Jane Eyre to William Faulkner’s Absalom! Absalom! as well as a number of works that rise well above mere entertainment but don’t quite make it all the way to the sacred halls of literature.

Among these are novels and stories by Victorian writers such as Wilkie Collins, Bram Stoker, and Elizabeth Gaskell. With the 20th century and the great literary changes it ushered in — realism, naturalism, experimentalism — gothicism lost some of its steam.

Daphne du Maurier is but one important practitioner of the tradition had a long, fruitful career. Daphne du Maurier, born in 1907 into a distinguished Anglo-French family of artists, writers and performers, published her first novel, The Loving Spirit, in 1931, and marched at once onto the bestseller lists, where she remained until her death in 1989.

In all she published 15 novels, six collections of stories and a dozen works of nonfiction, but one book stands apart from, and above, all the rest.

This is Rebecca, published in 1938. It was a bestseller in England and the United States, and in 1940 was produced as a movie by David O. Selznick, an extraordinary work of cinematic art starring Laurence Olivier, Joan Fontaine and Judith Anderson and directed by Alfred Hitchcock, his first film for an American studio.

Thanks in great measure to the movie, the book has been steadily in print ever since, in one paperback edition after another, and to this day enjoys sales that would be envied by many a Flavor of the Month author of ostensibly “serious” fiction.

Though Brontë’s childhood circumstances were straitened and du Maurier’s privileged, both girls lived essentially interior lives in which imagination, storytelling and fantasy were central.

Both published early (Brontë under the pseudonym Currer Bell) and both became wildly successful; Michael Mason, in his introduction to the Penguin Classics edition of Jane Eyre, says it “may be the most read novel in English,” and he may be right. Both women eventually married, du Maurier eagerly and Brontë reluctantly.

Not a mere imitation of Jane Eyre

Over the years there have been countless imitations of Jane Eyre. Whether Rebecca is in fact one of these is debatable, but the similarities do tend to leap out. Jane Eyre is governess to a wealthy girl; the unnamed narrator of Rebecca is companion to a wealthy older woman.

Both women (19 and 21 years old, respectively) are mousy in appearance (or think they are) and beleaguered by self-doubt. Both come into the employ of brooding, mysterious men in their forties — Edward Fairfax Rochester and Maxim de Winter — and both fall in love with them.

Both men harbor dreadful secrets: Jane learns Rochester’s on the eve of their wedding, the heroine of Rebecca learns de Winter’s after three months of marriage. The majestic country mansions owned by both men burn to the ground in spectacular conflagrations. Happy endings are achieved, but at a high price. 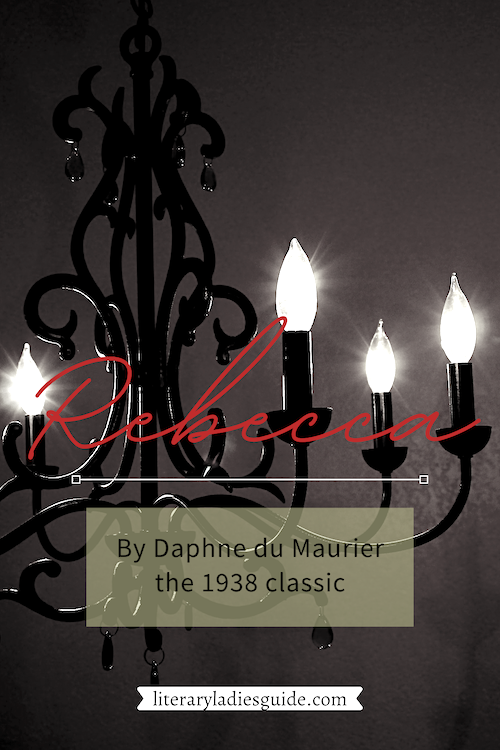 Rebecca is worthy of a second reading

It is tempting to pigeonhole Rebecca as “Jane Lite,” but that simply is not true. If it hasn’t quite the depth, if at times it lapses into conventions of the gothic novel or the English mystery novel, Rebecca is nonetheless a work of immense intelligence and wit, elegantly written, thematically solid, suspenseful even a second time around.

Indeed, one of the pleasures of a second reading is that though one (mostly!) remembers a book’s story and characters, invariably one discovers aspects of it that were missed the first time through.

Utterly caught up in the novel’s plot when first I read it, I simply didn’t understand that this isn’t just a novel about a lovesick girl’s obsessive jealousy of her husband’s dead first wife, it is also a book about the interweaving of past and present. Du Maurier treats memory with what can only be called delicacy and tenderness. 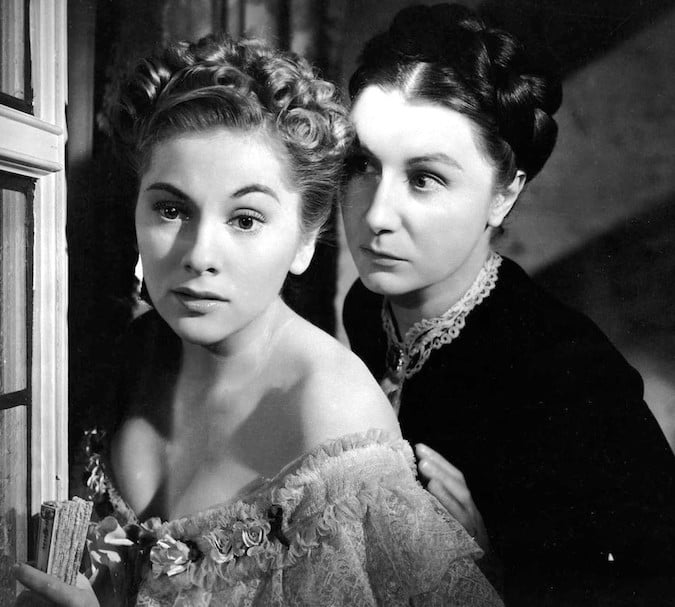 As the story of Rebecca begins …

As the novel begins the narrator is in Monte Carlo, tending to the endless whims of her fatuous employer, Mrs. Van Hopper, and falling in love with Maxim de Winter. Looking back, she urgently tries to bring that happy past back to life:

“I wanted to go back again, to recapture the moment that had gone, and then it came to me that if we did it would not be the same, even the sun would be changed in the sky, casting another shadow, and the peasant girl would trudge past us along the road in a different way, not waving this time, perhaps not even seeing us.”

Later, married to de Winter, relaxing at Manderley, his estate, she brings it all into focus:

“I wanted to go on sitting here, not talking, not listening to the others, keeping the moment precious for all time, because we were peaceful all of us, we were content and drowsy even as the bee who droned above our heads. In a little while it would be different, there would come tomorrow, and the next day, and another year.

And we would be changed perhaps, never sitting quite like this again. Some of us would go away, or suffer, or die, the future stretched away in front of us, unknown, unseen, not perhaps what we wanted, not what we planned. This moment was safe though, this could not be touched.

Here we sat together, Maxim and I, hand-in-hand, and the past and future mattered not at all. This was secure, this funny fragment of time he would never remember, never think about again.

He would not hold it sacred, he was talking about cutting away some of the undergrowth in the drive, and Beatrice agreed, interrupting with some suggestion of her own, and throwing a piece of grass at Giles at the same time.

For them it was just after lunch, quarter-past-three on a haphazard afternoon, like any hour, like any day. They did not want to hold it close, imprisoned and secure, as I did. They were not afraid.”

A novel written with exceptional skill

A great deal happens in that paragraph, and du Maurier brings it off with exceptional skill. Obviously there is a certain degree of foreshadowing (“In a little while it would be different . . .”), but there is nothing clumsy or intrusive about it like “Little did we know that . . .” or similar hack-fiction clichés.

The real heart of the passage is the narrator’s poignant longing to hold on to happiness — not passion or bliss, just plain, everyday, “haphazard” happiness — and her certain knowledge that the moment will pass.

Expressions of this longing arise over and over again in “Rebecca,” lending considerable thematic resonance to the narrator’s desperate attempt to learn her husband’s true feelings about his dead first wife and about herself.

Contrasting the narrators of Rebecca and Jane Eyre

One notable difference between du Maurier’s narrator and Jane Eyre is that the latter, though unprepossessing in appearance and manner, is spunky at the core. Jane sasses and teases her master (“Mr. Rochester affirmed I was wearing him to skin and bone …”) and starts a whole new life, all on her own, when he is forced to disclose his dreadful secret.

The narrator of Rebecca, by contrast, recalls “that self who drove to Manderley for the first time, hopeful and eager, handicapped by a rather desperate gaucherie and filled with an intense desire to please,” laments that “poise, and grace, and assurance were not qualities inbred in me,” envies “someone who was never anxious, never tortured by doubt and indecision, someone who never stood as I did, hopeful, eager, frightened, tearing at bitten nails, uncertain which way to go, what star to follow.”

But she doesn’t stay that way. A boat comes aground on the rough coast off Manderley and she somehow senses that “I had entered into a new phase of my life and nothing would be quite the same again.”

She is gripped by “a latent sense of excitement at the back of my mind that I did not understand,” and she steels herself not in fear but almost with joy:

“The moment of crisis had come, and I must face it. My old fears, my diffidence, my shyness, my hopeless sense of inferiority, must be conquered now and thrust aside. If I failed now I should fail forever. There would never be another chance.” She not merely faces up to the crisis, she emerges with a heart that, “for all its anxiety and doubt, was light and free.” 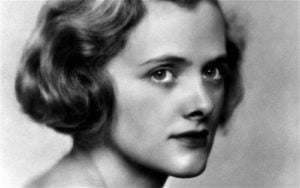 In the final analyisis of Rebecca, a Christie-esque denouement

That moment occurs with nearly 100 pages still to go in the novel. A good many of those pages are taken up by a scene in the library of Manderley that is reminiscent of an Agatha Christie final chapter in which the suspects and the inspectors assemble, Clue-like, to tie up all the loose ends.

It’s an oddly stiff, conventional way to solve the various plotting difficulties du Maurier has posed for herself, but in fairness it must be noted that she was a mere 30 years old.

At the time du Maurier had been married for about five years to Frederick Arthur Montague “Boy” Browning, to whom she was wildly devoted. It has been reported that one inspiration for Rebecca was her own jealousy of a woman to whom he had been engaged.

This helps explain the real passion with which her narrator welcomes the disclosure that the dead Rebecca had been “evil and vicious and rotten.” But that surely is as far as the autobiographical path leads us. Rebecca is strictly a work of the imagination, one that, if it does not rank quite so high as Jane Eyre, has pleased and mesmerized readers for more than six decades.