The Bean Eaters by Gwendolyn Brooks (1960) 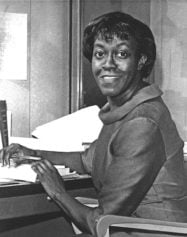 Gwendolyn Brooks (1917 – 2000), the Pulitzer Prize-winning American poet, produced works that included sonnets and ballads as well as blues rhythm in free verse. The Bean Eaters was a well-received collection of poems published in 1960. Critics noted her ability to tap into both specific and universal experiences:

“Her poems are clear, not because they are childishly simple but because they strike at the thought and feelings common to mature people.”

Though Brooks poetry reflects urban African-American life, its underlying themes are universal to the human experience. Following is a review of this collection from the year in which it was published:

From the original review of The Bean Eaters by Gwendolyn Brooks in the El Paso Herald-Post, by F.A. Ehmann (El Paso, Texas, April, 1960): The most frequent complaints against modern poetry are that it is difficult to understand, its meaning is vague, and that it is written for critics to explicate, not for readers to enjoy.

None of these complaints can be directed at Gwendolyn Brooks’ latest volume, The Bean Eaters. She has an excellent sense of form, and perhaps more important, she has a competent control of words.

Her language, her symbols, for example, have the virtue of being fresh and at the same time familiar. But the familiarity is not the result of triteness; it stems from Miss Brooks’ ability to relate her ideas to universal human experience.

Her poems are clear, not because they are childishly simple but because they strike at the thought and feelings common to mature people. 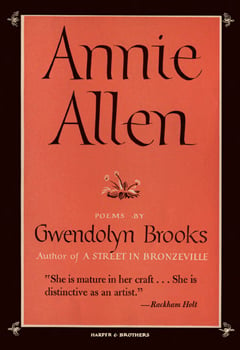 In spite of a rather unprepossessing title, The Bean Eaters is pleasant, sometimes significant reading. Miss Brooks has selected a community called “Bronzeville” to study, and she investigates with understanding and compassion the Bronzeville citizens, both black and white, who are caught up in the racial tension which disturbs our time.

Miss Brooks has explored Bronzeville before in A Street in Bronzeville, and she writes with knowledge, interest, and assurance.

While Miss Brooks is probably unknown to most of the reading public, her writing experience is considerable, and Annie Allen won her a Pulitzer prize in 1950. Readers interested in poetry which examines the human implications of the racial problem, will enjoy The Bean Eaters.

The title poem of this collection, “The Bean Eaters,” is a short lyric poem. An “old yellow pair,” likely referring to a mixed-heritage couple, are isolated and poor.

They’re depicted at their dinner table in “the back room,” likely for its cheap rent, eating a dinner of beans on worn dinnerware. The clutter of their crowded room reflects the need to hang on to the artifacts of life, no matter how humble.

They eat beans mostly, this old yellow pair.
Dinner is a casual affair.
Plain chipware on a plain and creaking wood,
Tin flatware.

Two who are Mostly Good.
Two who have lived their day,
But keep on putting on their clothes
And putting things away.

And remembering . . .
Remembering, with twinklings and twinges,
As they lean over the beans in their rented back room that
is full of beads and receipts and dolls and cloths,
tobacco crumbs, vases and fringes.

More about The Bean Eaters