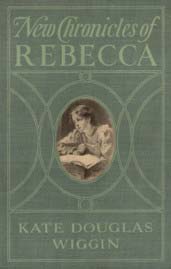 From the original review in the Indianapolis News, June, 1907:  Kate Douglas Wiggin has complied with the popular demand for “more,” by which the public testified that Rebecca of Sunnybrook Farm was to its taste, and has served up a second volume, The New Chronicles of Rebecca, an addition but not, in the particular sense, a sequel to the first book.

Rebecca is such a delightful little girl that it is no wonder Mrs. Wiggins’ readers wished to continue acquaintance with her, though it must be admitted that when an author hearkens to that request, the result often mars the original impression (complete in itself) as though a raconteur should deign to answer the anecdote wrecker’s “And then what happened?”

Rebecca’s creator has been wisely kind and still leaves Rebecca’s grown-up future a happy secret, satisfying herself with recounting several of her heroine not touched upon before, although contemporaneous with those of the pink sunshade, the banquet lamp, the missionaries, already known to us.

We find the Misses Sawyer’s niece still puzzling her aunts with the ebullitions of an original personality, composing her poems, and lending an eager hand in the service of humanity as embodied in the neighborhood of Riverboro.

She adopts a motherless baby; she organizes the “Daughters of Zion”; she rescues the stolen flag on the village reprobate in turning over a new leaf. Many pages are given from Rebecca’s “Thought Book” and a hint of romance, though not for Rebecca, comes in at the last. The illustrations by F.C. John give a vitalizing touch to the stories. 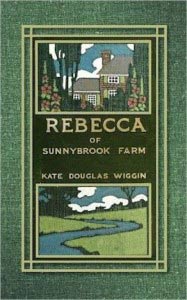 First Chronicle (how this book begins):

Miss Miranda Sawyer’s old-fashioned garden was the pleasantest spot in Riverboro on a sunny July morning. The rich color of the brick house gleamed and glowed through the shade of the elms and maples.

Luxuriant hop-vines clambered up the lightning rods and water spouts, hanging their delicate clusters here and there in graceful profusion. Woodbine transformed the old shed and tool house to things of beauty, and the flower beds themselves were the prettiest and most fragrant in all the countryside.

A row of dahlias ran directly around the garden spot,—dahlias scarlet, gold, and variegated. In the very centre was a round plot where the upturned faces of a thousand pansies smiled amid their leaves, and in the four corners were triangular blocks of sweet phlox over which the butterflies fluttered unceasingly.

In the spaces between ran a riot of portulaca and nasturtiums, while in the more regular, shell-bordered beds grew spirea and gillyflowers, mignonette, marigolds, and clove pinks. 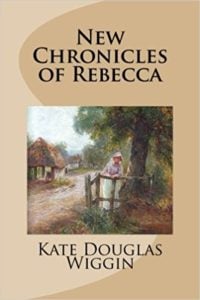 New Chronicles of Rebecca by Kate Douglas Wiggin on Amazon

Back of the barn and encroaching on the edge of the hay field was a grove of sweet clover whose white feathery tips fairly bent under the assaults of the bees, while banks of aromatic mint and thyme drank in the sunshine and sent it out again into the summer air, warm, and deliciously odorous.

The hollyhocks were Miss Sawyer’s pride, and they grew in a stately line beneath the four kitchen windows, their tapering tips set thickly with gay satin circlets of pink or lavender or crimson.

“They grow something like steeples,” thought little Rebecca Randall, who was weeding the bed, “and the flat, round flowers are like rosettes; but steeples wouldn’t be studded with rosettes, so if you were writing about them in a composition you’d have to give up one or the other, and I think I’ll give up the steeples …”

More about New Chronicles of Rebecca