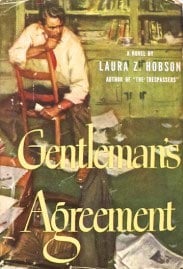 Though Laura Z. Hobson (1900 –  1986) is no longer a well-known name among today’s readers, her blockbuster 1947 novel, Gentleman’s Agreement, and its award-winning film adaptation are both classics. The storyline tackles “polite” antisemitism in post-World War II New York City and environs. Not as autobiographical as some of her other novels, it drew upon her skills as a keen observer of social issues.

Laura traveled in professional circles of publishing and advertising  in midcentury New York, and as a Jewish woman, she was sensitive to signs of subtle and overt bias. Restrictions against Jews in housing, jobs, schools, and hotels was all too common.

“I’ve got an idea for a book that the magazines will never look at, the movies won’t touch and the public won’t buy,” Laura told her publisher, “but I have to do it.” Her publisher disagreed with her, and to her own relief, she had been wrong about the book’s prospects.

When the book was published in appeared in February 1947, it hit the bestseller lists and stayed there for many months. It was also translated into more than a dozen languages.

The film version of the book was also huge success, much to the surprise of the author. Film rights had been sold even before the book was published, and came out that same year. Starring Gregory Peck and Dorothy Maguire, the movie of the same title won numerous awards, including the Academy Award as Best Picture of 1947. It received scores of other film awards, including one from the New York Film Critics as best film for that year. 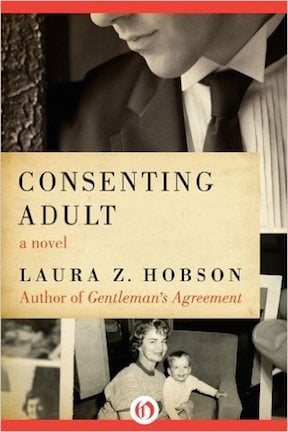 Following are two original reviews from 1947, one in a Jewish newspaper, and the other in a Canadian newspaper. Both give a good synopsis of the plot and convey the flavor of the novel.

1947 review in the Wisconsin Jewish Chronicle

The book does not deal with the professional Jew-baiters and their racket organizations. It concentrates primarily on those who claim that they have nothing against Jews, and yet a remark here and a remark there shows that they are subconsciously differentiating between themselves and Jews.

The central figure is Philip Schulyer Green, a magazine writer, who is assigned to write a series of articles on anti-Semitism aimed at exposing it. Because of the fact that the name Green could as easily be Jewish as not, he decides to pose as a Jew and to discover how a Jew actually feels among non-Jews.

He shares his decision with his editor and with the girl he loves, but keeps it secret from his office associates whom he tells that he is Jewish. It does not take long for him to discover that even in his own office — the office of a liberal publication — a Jew is considered different that other. 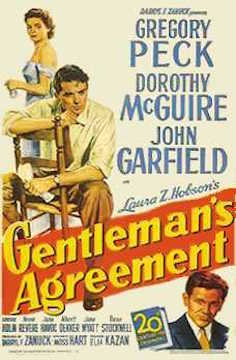 Not to speak of his doctor, who taking for granted that Green is a non-Jew, casts innuendoes on “Jewish doctors” and feels apologetic when Green tells him that he is a Jew. And thus it goes all along the line in hotels, in resorts, in the apartments where he resides, at parties, at dinner tables.

He finds a subtle kind of anti-Jewish sentiment in conventional American life and he begins to feel as sensitive as a Jew to all kinds of “innocent” remarks and comments about Jews.

The value of the book to non-Jewish readers is that it enables them to see themselves in a proper light and to ponder whether each of them is not subconsciously committing the same sin of differentiating between Jews and non-Jews.

The value of the book to Jews is even greater, since it will achieve more results than any apologetic Jewish literature ever can. The book is well written and will make its readers think. 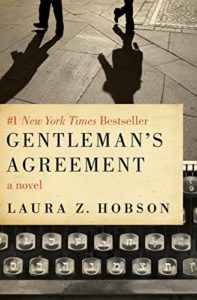 1947 review in the Winnipeg Tribune

From the original review in The Winnipeg Tribune, May 17, 1947: The title of this book gives the reader no idea of its central theme. It is in fact sardonic because it deals with something which is not supposed to be characteristic of the code of gentleman, namely, prejudice.

Prejudice is as old as mankind and in one or other of its many forms can be found in nearly every community, large or small. To get to the facts, the form of prejudice which is at the heart of Laura Z. Hobson’s best-selling novel is antisemitism.

Its central character is Philip Schuyler Green, who comes from a Protestant family of long lineage, a fact that has some importance in the thread of the story. Green is a staff writer for a publication regarded as a great liberal weekly. It is, the publishers think, a first-class medium for a series of articles on antisemitism, and given the assignment, Green accepts it with the enthusiasm of a crusading reporter.

His trouble is to get a fresh angle on the age-old theme of his series. He has made a name for himself with his articles on the Okies and coal miners. For the first he camped with the Okies in the hills of California. When he reported on the miners and their battles for a living wage he went into the pits to get first-hand knowledge of what he was writing about.

And for the assignment that’s the subject of this novel, he decided to take a flat in the proper district and present himself as a Jew. By using this ruse, he meets people of different backgrounds and encounters many of humanity’s time-worn tensions. He runs into situations that a non-Jew rarely, if ever meets. Incidentally, he learns much about the savagery and picayune meanness of his fellow human beings, and learns a great deal about himself as well.

Interwoven into this story is a stormy and difficult love affair between Philip and a young woman who is intelligent and well-meaning. Nonetheless she’s motivated by prejudices of her own, the existence of which she refuses to admit.

The plot of the book is rather flimsy, but considering that it’s a thesis novel, the author’s skillful writing makes up for this shortcoming. Hobson has the ability to make her characters intensely human, no matter whether they succumb to prejudice or are successful in their fight against it.

“ New York, the nervous, keyed-up city, was almost at rest two hours past midnight. Watching the sleeping stone under the quiet sky, the mind might know that there were still people laughing in night clubs, trucks and taxis still speeding through streets and avenues, swift subways underground still thundering into lighted stations.”

“They had known it, the patient, stubborn men who for years had argued and written and rephrased and fought over the Constitution and the Bill of Rights. They had known that injustice could corrupt the tree. They had known that its fruit could pale and sicken and fall at last to the dark ground of history where other dreams of equality and freedom had rotted.”

“The anti-semite offered the effrontery—and then the world was ready with harsh yardsticks to measure the self-control and dignity with which you met it. You were insensitive or too sensitive; you were too timid or too bellicose; they gave you at once the wound and the burden of proper behavior toward it.”

“He was a hoarder of books—he never could bring himself to throw any book away, so one or two of the ones he remembered owning ought to be somewhere in this conglomeration.”

“Slow and unarguable, the old desire for love, for a close-shared life, struck at him, not with Kathy, not with Anne, not with any one woman. It was concept only, urgency in the blood.”