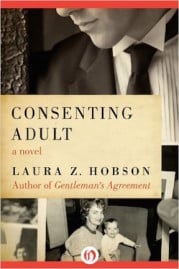 From the original review of Consenting Adult by Laura Z. Hobson in The Bakersfield Californian, August 1975, by Frederick A. Raborg:

Laura Z. Hobson has written perhaps her most important novel since Gentleman’s Agreement.

In Consenting Adult she confronts the problems faced when Tessa Lynn receives a poignant letter from her 17-year-old son, Jeff. “Dear Mama, I’m sorry about all the rows during vacation, and I have something to tell you that I guess I better not put off any longer … You see, I am a homosexual.”

Tess is shocked, and there are moments when she is described as she weeps over that letter not as “an ordinary weeping woman; it was rather, a roaring sobbing of an animal gored.” This is an incisive work, a polemic much more than a breast-beater. This is slice-of-life, not the stuff of soap operas.

Until Jeff’s letter, Tessa had led a busy above-average life in publishing. Her marriage is reasonably happy; she is proud of all her children. Finally she summons her courage to send a wire, “proud of you for letter … I love you as always. Mama.”

She then must face the need to tell her ill husband, and she must brace herself to swim the undercurrents thrust upon her by her other children.

A second letter, years later when Jeff has become a doctor, in which he relates the telling of his chief medical supervisor, whose response was, “So?” to other doctors and to all his friends, prompts Tessa to see him as courageous. “No more evasions for him … no more hiding, no more fear. Nobody can threaten him, nobody blackmail him. He is free. I have never loved him so much.”

A mirror for parents of gay children

Hobson mirrors the countess silent mothers, the mothers who do nothing but accept some kind of guilt burden for themselves, and the mothers who join the march or Parents for Gay Liberation … all mothers of the millions of homosexuals who are locked into a battle they did not seek, locked from their families and often caught between their warring factions.

Many parents of gay offspring do all the wrong things about it. Consenting Adult, though a novel, offers guidelines in often painful sequence that emphasize the affirmative aspects of having a gay child rather than the negative. 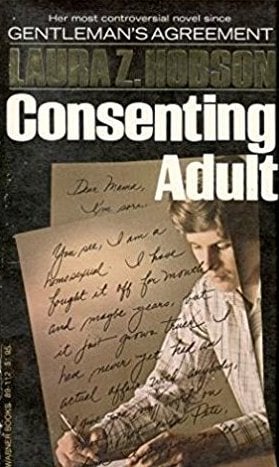 A plea for understanding

If this book can prevent one young man or girl for trying to escape a less than understanding home situation only to find himself or herself walking the streets of some major city … if it can prevent one youthful suicide (or for that matter, an elderly suicide, since there are no age limits), if it can make one employer understand that he average gay person offers no more threat than the average heterosexual, then Laura Z. Hobson deserves to attain the bestseller status her work is sure to have. 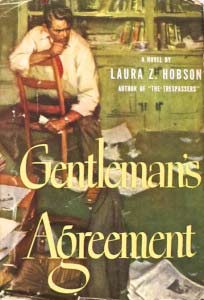 *This post contains affiliate links. If the product is purchased by linking through, Literary Ladies receives a modest commission, which helps maintain our site and helps it to continue growing!