Enormous Changes at the Last Minute by Grace Paley (1974) 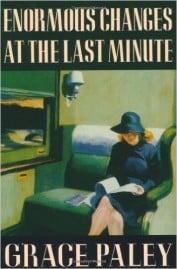 From the original review in the Indiana Gazette, April 1974.  The seventeen short stories in Enormous Changes at the Last Minute, a collection by Grace Paley are not conventional ones, but for those interested in an impressionistic form of writing filled with lucid images and true dialogue, they are well worth the reading.

Miss Paley has chosen New York City to celebrate in her work, and it is her impressions of the many kinds of people who make up the city, as well as the city itself and the interplay between the two, which are distilled to make stories vivid.

As for the writing, it is often chatty, but never garrulous, saying exactly what the writer wants it to say and perhaps a little more to the reader who care to think about it a bit.

Her use of imagery is wildly imaginative, bringing out perfectly ordinary scenes in a distinctive, not quite real way. In “Faith in a Tree” she used nautical images to invoke the way in which Faith, the woman telling the story, describes her friends such as Mrs. Finn, “… a broad barge, moving slow, a couple of redheaded cabooses dragged by clothesline at her stern.”

Or: ” … near enough now to spatter with spite, tilting delicately like a boy’s sailboat, Lynn Ballard floats past my unconcern to drop light anchor, a large mauve handbag, over the green bench slats.”

The character Faith appears a number of times in this finely woven collection and it is through her as well as the other women narrators like her that the reader hears, sees, and feels the lives which go to make up a city. And, while the stories are set in New York, they are universal in appeal in their touching upon the basic concerns of life. 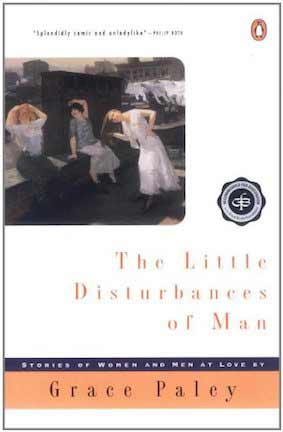 See also: The Little Disturbances of Man by Grace Paley

More about Enormous Changes at the Last Minute