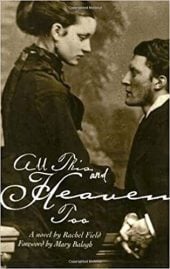 All This, and Heaven Too is the evocative title of Rachel Field’s 1938 historical novel, based on the life of her great-aunt Henriette Deluzy Desportes. Though she passed away prematurely, Field manage to produce a prodigious array of works in several genres, including children’s books (notably the award-winning Hitty: Her First Hundred Years), poetry, plays, and novels.

If the title seems familiar, it may be in part thanks to the widely praised 1940 film of the same name starring Bette Davis in the role of the novel’s heroine.

Originally published by the Macmillan Company, The Chicago Review Press republished the book in 2003, some years after it had fallen into relative obscurity. Here’s a brief description  from the later edition:

“This number-one bestselling novel is based on the true story of one of the most notorious murder cases in French history. The heroine, Henriette Deluzy-Desportes, governess to the children of the Duc de Praslin, found herself strangely drawn to her employer; when the Duc murdered his wife in the most savage fashion, she had to plead her own case before the Chancellor of France in a sensational murder trial that helped bring down the French king.

After winning her freedom, Henriette took refuge in America, where she hosted a salon visited by all the socialites of New York and New England. This thrilling historical romance, full of passion, mystery, and intrigue, has laid claim to the hearts and minds of readers for generations.”

The first portion of the novel takes place in France and details the years that Henriette spent in the Praslin household as the beloved governess of the younger of the Duc and Duchess’s nine children.

In exquisitely wrought prose, it richly imagines life in the upper echelons of early 19th-century Paris. Henriette grows accustomed to the comforts of such a life, even as an employee, but never forgets the straitened circumstances from which she rose.

After the Duc murders his wife and takes his own life, Henriette’s fall from grace is complete, but she never loses her dignity and devotion to the truth. What makes the novel all the more remarkable is that Field recreated real-life events with such skill and managed to maintain suspense in the retelling of a historical event.

The real-life cast of characters in the scandal:
Henriette Deluzy-Desportes and the Duc and Duchesse de Praslin
. . . . . . . . . .

A quick peek at the Duc de Praslin’s Wikipedia page confirms the story’s basis in real life events. Even Henriette Deluzy Desportes merits her own Wikipedia page, because the sensational case led, indirectly, to the second French Revolution of 1948.

Henriette was fortunate enough to gain passage to the U.S. as a way to escape her notoriety (though it couldn’t help but follow her).

The devoted Henry Martyn Field, some ten years Henriette’s junior (they never had children of their own), was a scion of an established family from Stockbridge, Massachusetts. Both Henriette and Rachel Field, the great-niece who authored this book, are laid to rest there.

The first two-thirds or so of All This, and Heaven Too, read like a great 19th-century novel. The narrative offers rich detail and drama, without being overwrought. The final third, however, once she and Mr. Field are happily married and ensconced in Stockbridge, I found to be incredibly anticlimactic.

This is unsurprising, since the climax and denouement happen before Henriette leaves France. I would have preferred the last one hundred fifty or so of the nearly six hundred pages to have been condensed into an epilogue.

Still, this is a book worthy of a place as a mid-twentieth century classic, with a nod to its author, Rachel Field, who deserves to be read and remembered much more than she is today. All This, and Heaven Too received nearly universal praise when it was published in 1938; here are two typical reviews from the period.

Fascinating Woman Is Heroine of This Novel

From the original review in the St. Louis Globe-Democrat (St. Louis, Missouri) sat, Oct 22, 1938: The adage that truth is stranger than fiction dares to be is strikingly illustrated in Rachel Field’s new novel.

The historical basis of her story is the notorious Praslin murder in France in 1847, a crime which not only filled the newspapers of both continents at the time and inspired several books, but which had repercussions on the throne of France.

However, the cold skeleton of historical truth alone does not make a great novel. It must be imbued with the warm, glowing flesh of life, and in doing this Miss Field presents the portrait of’ a remarkable woman—Henriette Deluzy Desportes. Henriette is impressive, both in fiction and in real life.

She was the great-aunt of the author by marriage, and this is the story of her life. She was a woman of warm personal charm and she possessed the quiet courage and the serenity of character to survive the “transplanting of a life uprooted from obscurity by an avalanche of passion and violence and class hatred.”

Henriette’s story, like her life, is divided into two parts. The first, and by far, the most dramatic, is the story of Mademoiselle Deluzy, the governess in the ill-fated household of the Duc and Duchesse de Praslin.

Through no fault of her own she is drawn into the web of scandal which culminates in the slaying of the Duchesse and the nightmare of inquisition and prejudice which followed.

To give reality and contemporaneousness to the past is not an easy task, add it is a tribute to Miss Field’s skill that the reader never has the impression of merely listening to a story, but shares with Henriette her thoughts and emotions during those trying years.

The second half of the story tells of Henriette’s flight to America to escape the notoriety which beat about her ears in France, and of her adjustment to a new and strange world. Before she left France she met Henry Field, a young minister and the brother of Cyrus Field, who laid the Atlantic cable. After a year of teaching in a New York girls’ school, she married him.

Miss Field reveals with sympathetic insight the love story of this unusual Frenchwoman and her New England husband who was ten years her junior.

In the years that follow we meet many of the well-known figure of that period, William Cullen Bryant, Harriet Beecher Stowe, Fanny Kemble, Peter Cooper, and Rachel, the noted French tragedienne. The story carries Henriette’s life down to shortly before her death in 1875.

All This, and Heaven, Too is in many respects Miss Field’s best work. It is projected on a much broader canvas than Time Out of Mind and tells a far more dramatic story. Its only weakness is

that the climax comes in the middle of the book, but this doesn’t break the continuity of the story. It has the same sense of intimacy of her previous work and reveals in even more impressive fashion her skill in character delineation. 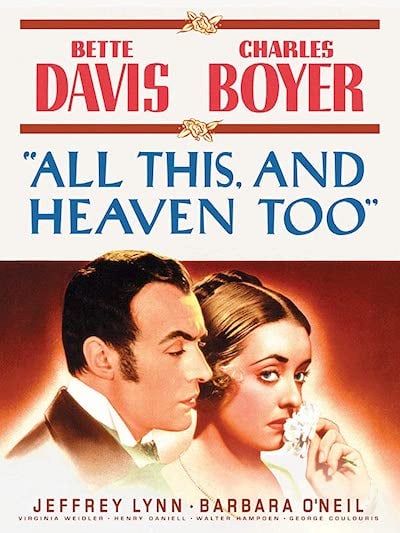 From The Kansas City Star, October 22, 1938: Rachel Field’s great-aunt Henriette Desportes was a favorite of the men during her eventful life. She had much less success winning feminine sympathy in her Victorian period. Now preserved brilliantly in print, she undoubtedly will command admiring attention from both men and women. She deserves a place up front among the 19th-century heroines in American fiction.

Her story makes one of the best novels of 1938, a book that contains all the ingredients required of a bestseller, yet one that possesses genuine literary merit.

Henriette Desportes was a real person, a figure in a great scandal that shook the French empire in 1847. After that, she came to the United States and was married to Henry M. Field, a New England minister who was editor of a religious periodical in New York. In her later years, Henriette was a figure in literary New York.

Painstaking historical research went into the making of this book. In choosing to cast Henriette’s story in the form of a novel, the author created large difficulties for herself — problems of plot, structural organization, continuity, and characterization. She has mastered them all, producing a vivid period piece, an arresting character study, and a narrative that maintains suspense and sustained interest.

The scandal in which Henriette was involved is the tragedy of the Duc and Duchesse of Praslin. The story begins as Henriette is hired as governess of the younger children of the unhappy couple, in their lavish home. Did the Doc finally kill his jealous, mentally unbalanced wife? Though he has concocted an alibi, he also poisons himself and slowly dies.

Henriette, whose name has been linked with that of the Duc in malicious gossip, is arrested as an instigator of the crime. The case becomes one of the most talked-about national scandals in the agitated days before the second French Revolution of 1848.

The sensational murder inquiry, in which Henriette wins her freedom through her courage and eloquence, is a dramatic high point that serves as the climax of this unusual woman’s life in France. It is the stormy prelude to the richly serene years of Henriette’s life in the United States. Seeking refuge in obscurity, she comes to this country as a teacher and finds a useful place for herself as the wife of Henry M. Field, an American minister who had first met her on a visit to Paris.

Miss Field has told each of the two contrasting parts of Henriette’s story with equal facility. The first part is a detailed, intimate account of the maturing of a young woman cast in a strange situation. Tempted by the love of a charming nobleman whose home she has become indispensable, threatened by the jealousy of the Duc’s wife, she is a warmhearted and steadfast figure.

In the last part of the book, she is a sensitive yet sensible woman making a success of life with Henry Field, the man she loves, taking part in the intellectual growth of the country. Both parts of the portrait fit together, showing the fair face of courage, self-reliance, dignity, warm human feeling, and joy in the good things of life.