A Room of One’s Own by Virginia Woolf: Two 1929 reviews + quotes 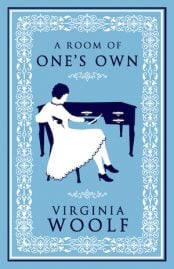 A Room of One’s Own by Virginia Woolf has stood the test of time, though the fact that it remains relevant is a sorry statement of contemporary culture. Following are presented two reviews from both sides of the Atlantic, plus a selection of quotes.

Based on two lectures Woolf delivered in the late 1920s at Newnham and Girton Colleges, two women’s colleges in Britain, it has since become a classic feminist text.

First published in 1929 by Hogarth Press, a publishing company in the U.K. that the author herself ran with her husband, Leonard Woolf, it was also published by Harcourt, Brace in the U.S. that same year.

Presented as an extended essay, A Room of One’s Own argues for a place for women writers in the literary world, which until that time, had been quite male dominated. While there are far more women writers who can live by their pens today, many arguments posed by the essay remain relevant.

In this essay, Woolf cites frustration with lack of formal education — both her own and for many other women of her time. She critiques the resulting need for social and financial dependence on men.

The most famous line in the essay, pertaining to women who wish to write, especially fiction, is that “A woman must have money and a room of her own…”

Author Mary Gordon supplied the Foreword to a 1989 edition of A Room of One’s Own, writing:

“A Room of One’s Own opened Woolf up to the charges – snobbery, aestheticism – by that time habitually laid at the Bloomsbury gate by the generation that came of age in the late Twenties.

To an extent, the accusations are just: Woolf is concerned with the fate of women of genius, not with that of ordinary women; her plea is that we create a world in which Shakespeare’s sister might survive her gift, not one in which a miner’s wife can have her rights to property; Woolf’s passion is for literature, not for universal justice.

The thesis of A Room of One’s Own – women must have money and privacy in order to write – is inevitably connected to questions of class: ‘Genius like Shakespeare’s is not born among labouring, uneducated, servile people.’ The words are hard; how infuriating they must have been to, say, a D.H. Lawrence. But Woolf is firm. Genius needs freedom; it cannot flower if it is encumbered by fear, or rancor, or dependency, and without money freedom is impossible.”

Today, it’s easy to embrace the groundbreaking feminist angle of A Room of One’s Own, but how was it received in 1929, when its thesis must have seemed quite revolutionary? Virginia Woolf was already quite highly respected, and so this work was surprisingly well received and embraced, and in the years ahead, became a feminist classic. 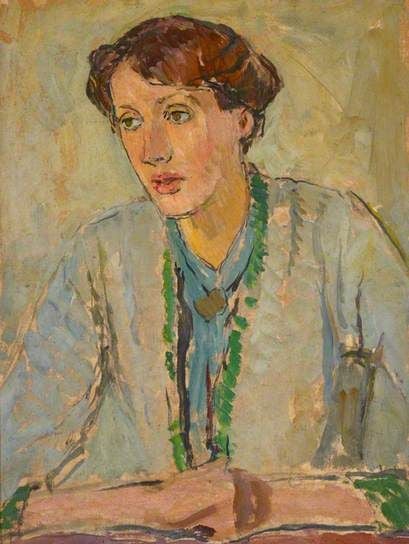 The creative spirit at work

From the original review in The Los Angles Times, December 1, 1929, by Lillian C. Ford: In A Room of One’s Own (Harcourt, Brace), Virginia Woolf shows the creative spirit at work, and she does it in a way that makes the book a delight.

Having been asked to speak on the subject “Women and Fiction,” Woolf finds she must do a lot of thinking. She does it, and let us in on the process. We than go with her to lunch at a men’s college called Oxbridge, where she is told that a woman may not step on the grass nor enter the library (except by special arrangement) nor do other things open to men.

Then she goes to a nearby women’s college and dines on a substantial stew, with prunes and custard for dessert.

All of this brings questions to the fore. Why the difference in the privileges, education, and even the food given to men as compared with women? What does it mean — that women are inferior?

Has it possibly something to do with women and their place in literature and the arts, specifically in fiction? Why is it that men, all through the ages, have had books and power and honors and time for research while women have had — children?

Since they must continue to have children if the race is to go on, are we to conclude that women have no place in the arts? By a leisurely, but nonetheless brilliant course of reasoning, Mrs. Woolf comes to the conclusion that we may yet shine; that our great creative period is in the future.

But, if we are to achieve in the same degree as men and not merely in isolated instances, we must have two things assured; five hundred pounds a year and a room of our own.

If you miss this book, which is profound and subtle and gently ironic and beautifully written, you will have missed an important reading experience. 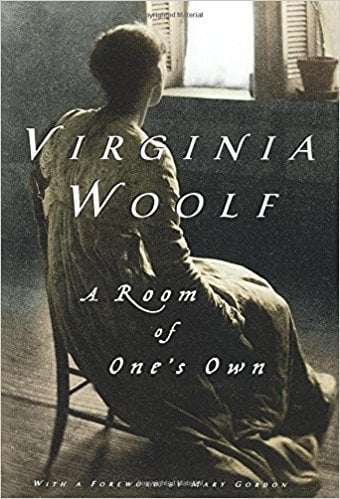 A consideration of woman’s creative power

From the original review of the Hogarth Press edition of A Room of One’s Own, The Guardian, U.K., November 19, 1929: It is too little to say that this imaginative and suggestive essay is a consideration of woman’s creative power and the effect upon it of the restrictions under which, until quite recently, she has laboured.

For besides its main theme, which is summed up in “a room of one’s own,” something that creative women, and indeed all women, have had little access to throughout history, it is full of adventures down unknown alleys of thought which the reader will be glad to share.

One realises afresh the full meaning of originality, the magic of the mind which plays around the concrete facts as though they were all spirit. And when the book is finished it is with a renewed sense of zest and stimulus that one takes up life again and looks anew at objects which before were only ordinary.

The main theme is woven throughout. Mrs. Woolf imagines Shakespeare with a twin sister gifted in all respects as he was:

“I told you in the course of this paper that Shakespeare had a sister; but do not look for her in Sir Sidney Lee’s life of the poet. She died young—alas, she never wrote a word. She lies buried where the omnibuses now stop, opposite the Elephant and Castle.

Now my belief is that this poet who never wrote a word and was buried at the cross–roads still lives. She lives in you and in me, and in many other women who are not here to–night, for they are washing up the dishes and putting the children to bed.

But she lives; for great poets do not die; they are continuing presences; they need only the opportunity to walk among us in the flesh.”

Suicide at the crossroads is the least that could befall the woman genius. And the common room — in which Fanny Burney had to do her thinking. This lays bare the hard lot of women, and shows how genius, save in the rarest of cases, has to be grown and tended and how circumstances play the largest part in furthering it.

Quotes from A Room of One’s Own

“A woman must have money and a room of her own if she is to write fiction.”

“Women have burnt like beacons in all the works of all the poets from the beginning of time. Indeed if woman had no existence save in the fiction written by men, one would imagine her a person of the utmost importance; very various; heroic and mean; splendid and sordid; beautiful and hideous in the extreme; as great as a man, some would say greater. But this is woman in fiction.”

“The history of men’s opposition to women’s emancipation is more interesting perhaps than the story of that emancipation itself.”

“Anything may happen when womanhood has ceased to be a protected occupation.”

“So long as you write what you wish to write, that is all that matters; and whether it matters for ages or only for hours, nobody can say.”

“Suppose, for instance, that men were only represented in literature as the lovers of women, and were never the friends of men, soldiers, thinkers, dreamers; how few parts in the plays of Shakespeare could be allotted to them; how literature would suffer!

We might perhaps have most of Othello; and a good deal of Antony; but no Caesar, no Brutus, no Hamlet, no Lear, no Jaques–literature would be incredibly impoverished, as indeed literature is impoverished beyond our counting by the doors that have been shut upon women.”

“All women together ought to let flowers fall upon the tomb of Aphra Behn, for it was she who earned them the right to speak their minds.”

“Women have sat indoors all these millions of years, so that by this time the very walls are permeated by their creative force, which has, indeed, so overcharged the capacity of bricks and mortar that it must needs harness itself to pens and brushes and business and politics.”

“Literature is strewn with the wreckage of those who have minded beyond reason the opinion of others.”

“I would venture to guess that Anon, who wrote so many poems without signing them, was often a woman.”

“Fiction is like a spider’s web, attached ever so lightly perhaps, but still attached to life at all four corners.”

“Lock up your libraries if you like; but there is no gate, no lock, no bolt that you can set upon the freedom of my mind.”

“Then may I tell you that the very next words I read were these – ‘Chloe liked Olivia…’ Do not start. Do not blush. Let us admit in the privacy of our own society that these things sometimes happen. Sometimes women do like women.”

“Anyone who has the temerity to write about Jane Austen is aware of two facts: first, that of all great writers she is the most difficult to catch in the act of greatness; second, that there are twenty-five elderly gentlemen living in the neighbourhood of London who resent any slight upon her genius as if it were an insult to the chastity of their aunts.”

“Therefore I would ask you to write all kinds of books, hesitating at no subject however trivial or however vast. By hook or by crook, I hope that you will possess yourselves of money enough to travel and to idle, to contemplate the future or the past of the world, to dream over books and loiter at street corners and let the line of thought dip deep into the stream.”

“Women and fiction remain, so far as I am concerned, unsolved problems.”

“Yet it is in our idleness, in our dreams, that the submerged truth sometimes comes to the top.”

More about A Room of One’s Own