Virginia Woolf: The Impact of Childhood Sexual Abuse on her Life and Work 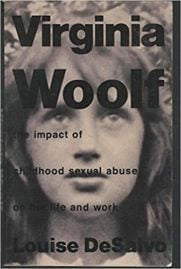 From the 1989 Beacon Press edition of Virginia Woolf: The Impact of Childhood Sexual Abuse on her Life and Work by Louise DeSalvo:

Although at her death Virginia Woolf left diaries, memoirs, letters, stories, notebooks, and drafts of novels as well as published work that documented the trauma she endured as a child, one of the most significant facts about Woolf’s childhood — that she was sexually abused — has been glossed over by her biographers.

Louise DeSalvo’s long-awaited book creates a portrait of Woolf that reveals the extent of her childhood abuse – what she endured, how she coped with it, reacted to it, understood it.

Carrying the scars of sexual abuse

Born in 1882, into a Victorian family where incest, sexual violence and violent and abusive behavior were common, Woolf was molested from the time she was six years old until well into her adulthood.

Woolf not only suffered sexual abuse, but also carried the scars of that abuse until her death; what was previously taken to be her “madness” by nearly everyone, including her husband Leonard, was actually a typical reaction to painful childhood experiences.

Sensitively written and intellectually courageous, Virginia Woolf is the first extended account of the abusive environment Woolf grew up in, set against the backdrop of a Victorian England in which child abuse was all too common. It is also a thorough analysis of how Woolf wrote about her own mistreatment and that of other children.

Using fresh readings of Woolf’s remarkable oeuvre, new information gleaned from unpublished diaries, contemporary studies of sexual violence, and historical material about Victorian attitudes toward children and family life, Virginia Woolf is a brilliant new interpretation of one of this century’s greatest writers and a triumph of literary and psychological investigation. 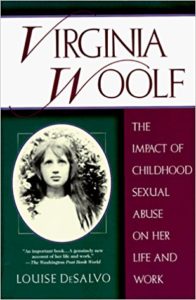 Virginia Woolf: The Impact of Childhood Sexual Abuse on Her Life and Work on Amazon*

May Sarton’s comment on Virginia Woolf by Louise de Salvo

“It is strange that so few of the many writers on Virginia Woolf and the Stephan family have analyzed in depth her childhood and adolescence and the sexual traumas she suffered between her sixth and eighteenth years.

It is of the greatest importance to any understanding of both the woman and the writer that Louise DeSalvo has now done so in a heavily documented, extremely painful, and extremely valuable book…

The genius of Woolf is not the subject here; that can be found only in her works. But what emerges on every page is the heartbreaking stamina and courage of the child, lonely and unprotected and lacking parenting of any understanding kind, and later to go on producing works of art.

No one will ever again believe that she was mad who reads what is set down here with so much skill and authority… DeSalvo’s monumental work will be bound to change the Woolf canon in radical ways. Let us hope its message will be heard.” — May Sarton