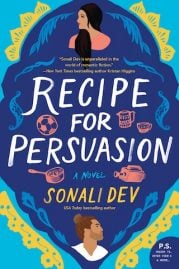 It is a truth universally acknowledged that there are Jane Austen fans so devoted that they read Pride and Prejudice (and/or her other novels) every year or two.

Contemporary Austen-flavored retellings only add fuel to the literary fire. In that vein, the witty pen of Sonali Dev has produced Pride, Prejudice and Other Flavors (2019) and Recipe for Persuasion (2020).

For fervent devotees, for whom there can never be Too Much Jane, Ms. Dev’s novels will be a delicious treat. They transpose Austen-esque complicated relationships to the modern world, and season them with culinary themes. Here’s a look at these entertaining reads by Sonali Dev.

Pride, Prejudice, and Other Flavors By Sonali Dev

Award-winning author Sonali Dev launches a new series about the Rajes — an immigrant Indian family descended from royalty, who have painstakingly built their lives in San Francisco.

It is a truth universally acknowledged that only in an overachieving Indian American family can a genius daughter be considered a black sheep.

Trisha, an empowered American woman descended from Indian royalty, and D.J., the British man who leaves behind his career and culinary acclaim to come to California to care for his grievously ill sister. 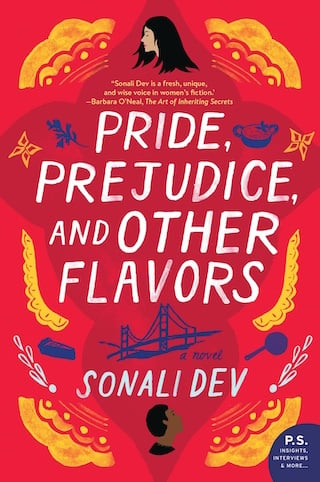 Dr. Trisha Raje is San Francisco’s most acclaimed neurosurgeon. But that’s not enough for the Rajes, her influential immigrant family who’s achieved power by making its own non-negotiable rules:

Trisha is guilty of breaking all three rules. But now she has a chance to redeem herself. So long as she doesn’t repeat old mistakes.

Up-and-coming chef DJ Caine has known people like Trisha before, people who judge him by his rough beginnings and place pedigree above character. He needs the lucrative job the Rajes offer, but he values his pride too much to indulge Trisha’s arrogance. And then he discovers that she’s the only surgeon who can save his sister’s life.

As the two clash, their assumptions crumble like the spun sugar on one of DJ’s stunning desserts. But before a future can be savored there’s a past to be reckoned with … A family trying to build home in a new land. A man who has never felt at home anywhere. And a choice to be made between the two.

Sonali Dev cannily weaves references to challenges still faced by those of multi-ethnic heritage. And yet, Trisha’s family is as American as Tikka Masala. Her brother is running for Governor of California; her sister (hiding an unplanned, high-risk pregnancy) is his campaign manager; a dear cousin is the owner of a struggling neighborhood restaurant.

Their story is our story, and the infused beauty of the interwoven tales brims with flavor and delight. Pride, Prejudice and Other Flavors is at once a compelling, heartwarming romance between two strangers from completely different worlds, and a poignant examination of cultural assimilation, identity, and an exploration of the places we come to call “home.”

Recipe for Persuasion by Sonali Dev

When waiting for a new book is half agony, half hope … acclaimed author Sonali Dev Delivers!

“I must speak to you by such means as are within my reach. You pierce my soul. I am half agony, half hope. Tell me not that I am too late, that such precious feelings are gone forever. I offer myself to you again with a heart even more your own than when you almost broke it, eight years and a half ago.

Dare not say that man forgets sooner than woman, that his love has an earlier death. I have loved none but you. Unjust I may have been, weak and resentful I have been, but never inconstant.”  — from Jane Austen’s Persuasion

Executive editor Tessa Woodward notes, “Persuasion is the Austen novel most known for its well-rounded heart, emotional depth, what makes someone worthy of love and respect – and Sonali Dev has written Recipe for Persuasion to pay tribute to the subtle nuances of the original.”

Award-winning author Sonali Dev continues her new series about the Rajes — an immigrant Indian family descended from royalty, who have painstakingly built their lives in San Francisco.

Recipe for Persuasion is a clever, deeply layered, and heartwarming romantic comedy that follows in the Jane Austen tradition—this time, with a twist on Persuasion.

And while having a fun cooking hook, like Pride, Prejudice and Other Flavors, Recipe for Persuasion incorporates a darker thread of familial discord and dysfunction, a counterpoint to the pop-culture friendly plot.

The heroine is a renowned chef who has been paired with a soccer star on a reality competition, hoping to give her restaurant a much-needed publicity boost. Her partner just happens to be the one man she ever loved … and lost.

Chef Ashna Raje desperately needs a new strategy. How else can she save her beloved restaurant and prove to her estranged, overachieving mother that she isn’t a complete screw up?

When she’s asked to join the cast of Cooking with the Stars, the latest hit reality show teaming chefs with celebrities, it seems like just the leap of faith she needs to put her restaurant back on the map. She’s a chef, what’s the worst that could happen? Rico Silva, that’s what. 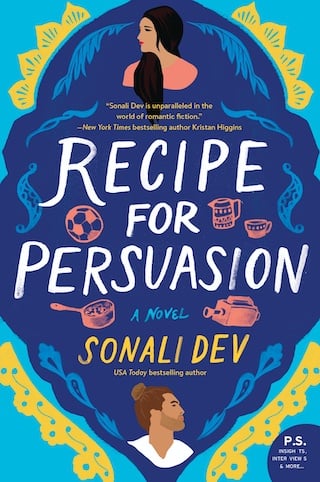 Being paired with a celebrity who was her first love, the man who ghosted her at the worst possible time in her life, only proves what Ashna has always believed: leaps of faith are a recipe for disaster. World Cup winning soccer star Rico Silva isn’t too happy to be paired up with Ashna either.

Losing Ashna years ago almost destroyed him. The only silver lining to this bizarre situation is that he can finally prove to Ashna that he’s definitely over her.

But when their catastrophic first meeting goes viral, social media becomes obsessed with their chemistry. The competition on the show is fierce…and so is the simmering desire between Ashna and Rico.

Every minute they spend together rekindles feelings that pull them toward their disastrous past. Will letting go again be another recipe for heartbreak—or a recipe for persuasion?

In Recipe for Persuasion, Sonali Dev once again takes readers on an unforgettable adventure in this fresh, fun, and enchanting romantic comedy.

“Clever allusions to Persuasion aside (even Jane Austen fans will be challenged to spot them all), this is a sumptuously multilayered story about the ways love gets tangled in family life and romantic relationships.” — Library Journal (Starred review)

“Dev balances the toe-curling romance with high-octane family drama, fleshing out Ashna’s strained relationship with her mother with touching flashbacks to her parents’ past. Dev’s candor and sensitivity in both story lines set this family-centric romance apart. Readers are sure to be impressed.” — Publishers Weekly (Starred review)

About the Author: Award-winning author Sonali Dev writes Bollywood-style love stories that let her explore issues faced by women around the world while still indulging her faith in a happily ever after. Sonali lives in the Chicago suburbs with her very patient and often amused husband and two teens who demand both patience and humor, and the world’s most perfect dog. Find her on the web: