Quotes from Persuasion by Jane Austen 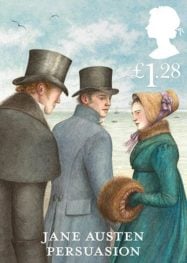 Persuasion (1817) is the last novel that beloved British author Jane Austen completed; it was published six months after her death. Following is a sampling of quotes from Persuasion, a touching and engaging novel.

Persuasion may well be Austen’s most romantic story, and yet, as with her other works, it’s far from frivolous, exploring themes of lost love, missed opportunity, heartbreak, and becoming one’s own person.

Anne Elliot is twenty-seven when the story begins (an older heroine than is usual for this time and place). She’s a member of a family who suffers the indignity of having to lower their status as a way to get out of debt. At her age, a woman would have been considered well past the bloom of youth and on the road to spinsterhood.

As a result of the Elliots having to rent out their home, Anne re-encounters a Navy captain, Frederick Wentworth, to whom she was engaged some years before. Their reconnection is central to a plot filled with pathos, humor, social satire, and many touching scenes.

Persuasion is a romantic story at heart, so to speak but is so much more. It’s about the journey and growth of Anne Elliot, who becomes her own person, able to make decisions for herself after being in thrall to others.

She and the other characters experience loss and pain, and ultimately, love. Like all of Austen’s novels, it’s exquisitely written; the reader grows to love and care for Anne, much as Wentworth himself does.

“Persuasion may not have the sparkling charm of Pride and Prejudice or the satirical bite of Emma, but it is Austen’s most deeply felt, melancholy, and beautiful novel. It is the last novel she completed before her death, and it’s written in a different mode than the rest of her books: It’s more lyrical than the rest, and a little sadder and less aggressively witty.” 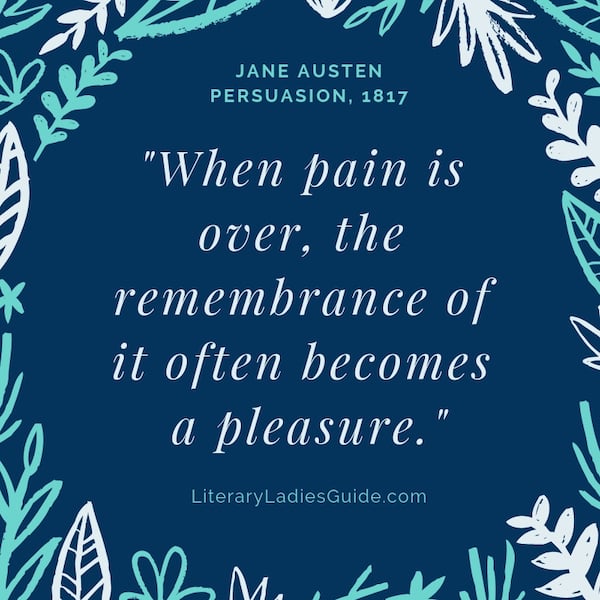 “I hate to hear you talk about all women as if they were fine ladies instead of rational creatures. None of us want to be in calm waters all our lives.”

“We live at home, quiet, confined, and our feelings prey upon us.”

“I do not think I ever opened a book in my life which had not something to say upon woman’s inconstancy. Songs and proverbs, all talk of woman’s fickleness. But perhaps you will say, these were all written by men.”
“Perhaps I shall. Yes, yes, if you please, no reference to examples in books. Men have had every advantage of us in telling their own story. Education has been theirs in so much higher a degree; the pen has been in their hands. I will not allow books to prove anything.”

“Perhaps I shall. Yes, yes, if you please, no reference to examples in books. Men have had every advantage of us in telling their own story. Education has been theirs in so much higher a degree; the pen has been in their hands. I will not allow books to prove anything.”

“Dare not say that man forgets sooner than woman, that his love has an earlier death.”

“The evening ended with dancing. On its being proposed, Anne offered her services, as usual, and though her eyes would sometimes fill with tears as she sat at the instrument, she was extremely glad to be employed, and desired nothing in return but to be unobserved.”

“Thus much indeed he was obliged to acknowledge – that he had been constant unconsciously, nay unintentionally; that he had meant to forget her, and believed it to be done. He had imagined himself indifferent, when he had only been angry; and he had been unjust to her merits, because he had been a sufferer from them.”

“They had no conversation together, no intercourse but what the commonest civility required. Once so much to each other! Now nothing! … There could have been no two hearts so open, no tastes so similar, no feelings so in unison, no countenances so beloved. Now they were as strangers; nay, worse than strangers, for they could never become acquainted. It was a perpetual estrangement.”

“Nor could she help feeling, on more serious reflection, that, like many other great moralists and preachers, she had been eloquent on a point in which her own conduct would ill bear examination.”

“If there is any thing disagreeable going on, men are always sure to get out of it.”

“I must go, uncertain of my fate; but I shall return hither, or follow your party, as soon as possible. A word, a look, will be enough to decide whether I enter your father’s house this evening or never.”

“How quick come the reasons for approving what we like.”

“All the privilege I claim for my own sex (it is not a very enviable one: you need not covet it), is that of loving longest, when existence or when hope is gone!”

“One man’s ways may be as good as another’s, but we all like our own best.”

“I hope I do justice to all that is felt by you, and by those who resemble you. God forbid that I should undervalue the warm and faithful feelings of any of my fellow-creatures! I should deserve utter contempt if I dared to suppose that true attachment and constancy were known only by woman.”

“I can listen no longer in silence. I must speak to you by such means as are within my reach. You pierce my soul. I am half agony, half hope. Tell me not that I am too late, that such precious feelings are gone for ever. I offer myself to you again with a heart even more your own than when you almost broke it, eight years and a half ago. Dare not say that man forgets sooner than woman, that his love has an earlier death. I have loved none but you. Unjust I may have been, weak and resentful I have been, but never inconstant.”

“Let us never underestimate the power of a well-written letter.”

“The last few hours were certainly very painful,” replied Anne: “but when pain is over, the remembrance of it often becomes a pleasure. One does not love a place the less for having suffered in it, unless it has been all suffering, nothing but suffering.”

“She hoped to be wise and reasonable in time; but alas! Alas! She must confess to herself that she was not wise yet.”

“I do think that men can forget a lost love quickly. I know that women would find it much harder.”

“Here is a nut. To exemplify, a beautiful glossy nut, which, blessed with original strength, has outlived all the storms of autumn. Not a puncture, not a weak spot anywhere. This nut … while so many of its brethren have fallen and been trodden under foot, is still in possession of all the happiness that a hazel-nut can be supposed capable of.” 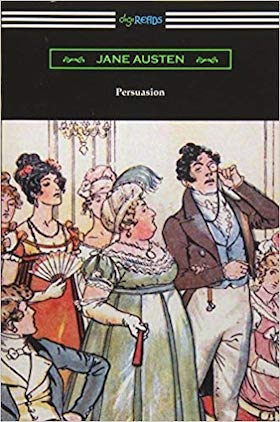 “When any two young people take it into their heads to marry, they are pretty sure by perseverance to carry their point, be they ever so poor, or ever so imprudent, or ever so little likely to be necessary to each other’s ultimate comfort.”

“A man does not recover from such devotion of the heart to such a woman! He ought not; he does not.”

“Nursing does not belong to a man, it is not his province. A sick child is always the mother’s property, her own feelings generally make it so.”

“If I was wrong in yielding to persuasion once, remember that it was to persuasion exerted on the side of safety, not of risk. When I yielded, I thought it was to duty; but no duty could be called in aid here. In marrying a man indifferent to me, all risk would have been incurred and all duty violated.”

More about Persuasion by Jane Austen

One Response to “Quotes from Persuasion by Jane Austen”