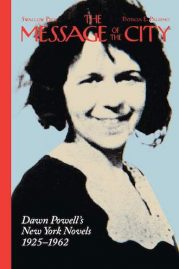 Dawn Powell (1896 – 1965) is considered a “writer’s writer,” though nearly all of her work was out of print by the time she died. Overcoming a hard-knock early life in the American midwest, she moved to New York City in 1918 and fell in love with it. Dawn Powell’s New York novels and stories are among the most enduring of her works.

Though she wrote prolifically throughout her life, producing novels, short stories, poetry, and plays, she didn’t gain much notoriety — for better or worse — during her lifetime. To the joy of devoted fans and new readers alike, many of her works have been rediscovered and rereleased.

In The Message of the City: Dawn Powell’s New York Novels 1925 – 1962 (2016), a critical biography and study of Powell’s work, Patricia Palermo gives the underappreciated author her due, and a place in American letters. From the publisher, Ohio University Press (A Swallow Press book):

Her many novels are typically divided into two groups: those dealing with her native Ohio and those set in New York.

“From the moment she left behind her harsh upbringing in Mount Gilead, Ohio, and arrived in Manhattan, in 1918, she dove into city life with an outlander’s anthropological zeal,” reads a New Yorker piece about Powell, and it is those New York novels that built her reputation for scouring wit and social observation.

In this critical biography and study of the New York novels, Patricia Palermo reminds us how Powell earned a place in the national literary establishment and East Coast social scene.

Though Powell’s prolific output has been out of print for most of the past few decades, a revival has been under way: the Library of America, touting her as a “rediscovered American comic genius,” released her collected novels, and in 2015 she was posthumously inducted into the New York State Writer’s Hall of Fame.

Engaging and erudite, The Message of the City fills a major gap in in the story of a long-overlooked literary great. Palermo places Powell in cultural and historical context and, drawing on her diaries, reveals the real-life inspirations for some of her most delicious satire. 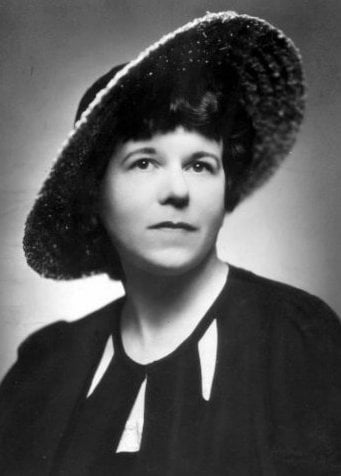 From the introduction to The Message of the City

Ohio-born writer Dawn Powell, who lived from 1896 to 1965, was always prolific, writing fifteen novels; more than a hundred short stories; a dozen or so plays; countless book reviews; several radio, television, and film scripts; volumes of letters and diary entries; even poetry.

So productive was she that, following one spate of housecleaning, she wrote to her editor at Scribner’s, Max Perkins, “I was appalled by the mountains of writing I had piled up in closets and file cases and trunks … It struck me with terrific force that I just wrote too goddam much. Worse, I couldn’t seem to stop”

Weighing her literary output against that of some of her contemporaries, Powell joked to her close friend, writer and literary critic Edmund Wilson, “If I don’t write for five years I may make quite a name for myself and if I can stop for ten I may give Katherine Anne [Porter] and Dorothy Parker a run for their money.”

If in her lifetime, Powell never did make either the name for herself or the money she had hoped, she did enjoy certain successes. In the year before her death, she was awarded the American Institute of Arts and Letters’ Marjorie Peabody Waite Award for lifetime achievement; a few years before that, she was granted an honorary doctorate from her alma mater, Lake Erie College for Women.

… After she moved from Ohio to Manhattan in 1918 and began writing the many works that today are divided into the Ohio and the New York novels (with the exceptions of Angels on Toast, sometimes called a Chicago novel, and A Cage for Lovers, set in Paris), Malcolm Cowley hailed her as “the cleverest and wittiest writer in New York”; Diana Trilling called her “one of the wittiest women around.”

Other friends and admirers included Ernest Hemingway, John Dos Passos, Matthew Josephson, Edmund Wilson, and many more. Some of her books sold adequately, many less than adequately; none were blockbusters by any means, and virtually all were out of print by the time of her death in 1965.

Thanks to the late Gore Vidal and Tim Page — her biographer, the Pulitzer prize–winning former Washington Post music critic and professor in both the Annenberg School of Journalism and the Thornton School of Music at the University of Southern California—twelve of her novels, a volume of her letters, a collection of her diaries, and some of her plays and short stories have in recent decades been reissued to critical acclaim.

Several of her plays have been either restaged or produced for the first time, and a 1933 film, Hello Sister, loosely based on Powell’s play Walking Down Broadway, was in the 1990s released on VHS, if only out of interest in its famous director, Erich von Stroheim; it was shown in a Greenwich Village cinema in 2012.

Of course, more important than quantity of writing is quality. Powell’s novels are filled with astute observations, wry commentaries, spot-on characterizations. Despite her reputation as a tough and unflinching satirist, she is capable of moving tenderness and pathos, particularly in the Ohio novels.

In an article originally published in the New York Times Book Review, Terry Teachout called My Home Is Far Away, one of the Ohio novels, a “permanent masterpiece of childhood.” Few novelists are better at depicting young children than is Powell; one need read but the first several chapters of My Home Is Far Away to see that. Edmund Wilson found her books “at once sympathetic and cynical.”

… But most remarkable perhaps is her sense of humor. Few writers are wittier, more scathing, more insightful than Powell. Not only Gore Vidal, Terry Teachout, and Diana Trilling, but Margo Jefferson, John Updike, Michael Feingold, and many other distinguished authors and critics have found much to like in the novelist.

Patricia E. Palermo is a Southern California native, professor of English, and independent scholar who has lived in the New York City area for more than twenty years.

Praise for Message of the City

“Palermo understands Powell’s mixture of wit and pain, knows the books by heart, has the scholarship down pat, and has written it up in an intelligent and lyrical manner. A smart, affectionate, and never blinkered study of one of America’s great authors.” — Tim Page, author of Dawn Powell: A Biography

“The Message of the City is a solid, thoughtful piece of work. Palermo’s familiarity with Dawn Powell’s own writings and with the secondary literature on her life is comprehensive, and she’s integrated her analyses of fact and fiction with exceptional skill. Anyone who reads the book will come away with a clear understanding of why Powell’s New York novels are of continuing interest, both as works of satire and as sharp-eyed fictionalized portraits of her life and times.” — Terry Teachout, drama critic, Wall Street Journal