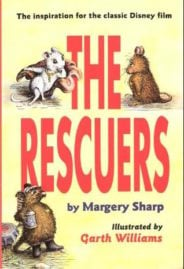 The Rescuers by Margery Sharp was the first children’s novel by this British author, who was also known for her romantic comic novels for adults (one of the best known of which was Cluny Brown). With drawings by well-known American illustrator Garth Williams, it was published in 1959, both in the UK and US.

The novel launched a series of books starring Miss Bianca, a socialite mouse who assisted animals as well as humans in perilous situations, and fellow mice Bernard and Nils. These well-received children’s novels have had legions of grown-up fans as well, and all told added up to nine books.

Disney adapted the stories to two animated films, The Rescuers (1977) and The Rescuers Down Under ( 1990).This brief description is from the New York Review of Books edition (2016):

Miss Bianca is a white mouse of great beauty and supreme self-confidence, who, courtesy of her excellent young friend, the ambassador’s son, resides luxuriously in a porcelain pagoda painted with violets, primroses, and lilies of the valley. Miss Bianca would seem to be a pampered creature, and not, you would suppose, the mouse to dispatch on an especially challenging and extraordinarily perilous mission.

However, it is precisely Miss Bianca that the Prisoners’ Aid Society picks for the job of rescuing a Norwegian poet imprisoned in the legendarily dreadful Black Castle. Miss Bianca, after all, is a poet too, and in any case she is due to travel any day now to Norway.

There, Miss Bianca will be able to enlist one Nils, known to be the bravest mouse in the land, in a desperate and daring endeavor that will take them, along with their trusty companion Bernard, across turbulent seas and over the paws and under the maws of cats into one of the darkest places known to man or mouse. It will take everything they’ve got and a good deal more to escape with their own lives, not to mention the poet.

Margery Sharp’s classic tale of pluck, luck, and derring-do is amply and beautifully illustrated by the great Garth Williams. 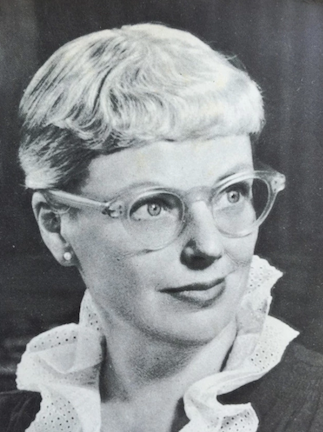 This description is from the 1959 Little, Brown edition:

Margery Sharp is famous for charmingly sophisticated, original novels like Cluny Brown, The Gipsy in the Parlour, and The Eye of Love, which have captivated happy readers for the last twenty-five years.

The Rescuers, a fantasy about the adventures of three mice, is not as much of a departure as it might seem. Miss Sharp’s characteristic gaiety, shrewdness, warmth, and humor are in full attendance, and make this a truly civilized animal story. 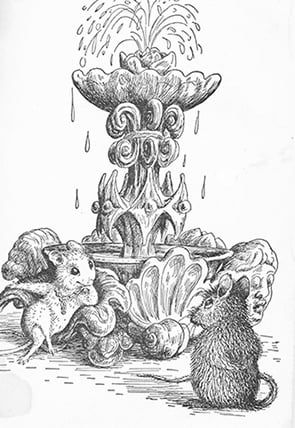 The breathtaking adventure in which three assorted mice named Miss Bianca, Bernard, and Nils are here engaged is set in motion by that venerable mouse organization, the Prisoners’ Aid Society. A most hazardous case is on the agenda: the rescue of a Norwegian poet from the grim, windowless Black Castle, the most terrible prison in their rough, uncivilized country.

The first step, the society agrees, is to fetch a mouse from Norway who will be able to communicate with the poet when (and if) the rescuers are able to reach him. And who could be better equipped for this task than Miss Bianca, the fabulous and mysterious Embassy mouse who lives in a Porcelain Pagoda and is soon to fly to Norway with her young friend, the Ambassador’s son. 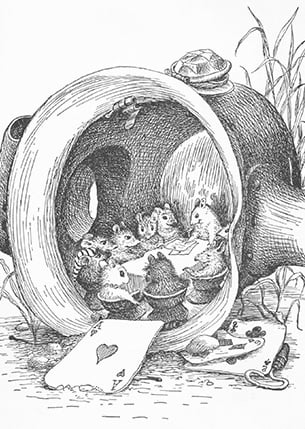 When Bernard, the honest, humble pantry mouse, ventures up to Miss Bianca’s golden cage, catches his breath at her soft, snowy fur and beautiful brown eyes, and persuades this delicate, sensitive creature to help in the good cause (for Miss Bianca is a poet herself), the rescue has begun — and the reader is off on one of the most charming adventures ever recorded.

As captivating as the story itself are the illustrations by Garth Williams, the artist behind Stuart Little, Charlotte’s Web, and The Rabbits’ Wedding. He brings to life silky Bianca, plain sturdy Bernard, rough Nils, and the poor poet. His enchanting drawings keep pace with every event in the story, and make The Rescuers as much fun to look at is it is to read. 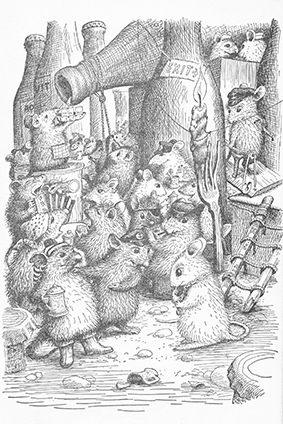 About the author and illustrator (text from the NewYork Review of Books Kids edition, 2016)

Margery Sharp (1905 – 1991) published fifteen novels for adults before writing The Rescuers (1959), her first book for children. Born Clara Margery Melita Sharp in Salisbury, England, she spent part of her childhood in Malta before returning to England for high school.

By the time she graduated with honors in French from the University of London, she had already begun publishing short stories; her work would later become a fixture in such American and British magazines as Harper’s Bazaar, Ladies’ Home Journal, Good Housekeeping, and Punch. Several of Sharp’s novels were serialized and a number became successful films, including Cluny Brown (screenplay by Ernst Lubitsch) and Britannia Mews (written by Ring Lardner, Jr.); the Rescuers series eventually numbered nine volumes and inspired two animated feature films from Disney.

Garth Williams (1912 – 1996) illustrated nearly one hundred books for children, including Stuart Little and Charlotte’s Web by E.B. White, A Cricket in Times Square by George Selden, and the Little House series by Laura Ingalls Wilder.

Born in New York City to English artist parents, Williams lived in New Jersey, France, and Canada before moving to England in 1922. He had plans to be an architect but ultimately studied painting, design, and sculpture at the Westminster Art School and the Royal College of Art.

Having returned to the United States after World War II, Williams found work at The New Yorker, where he met E.B. White just as the latter was finishing Stuart Little. Williams also wrote and illustrated several books of his own, including The Chicken Book: A Traditional Rhyme, The Adventures of Benjamin Pink, Baby Animals, and The Rabbits’ Wedding. 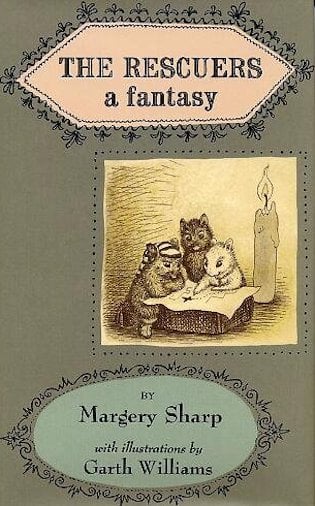 More about The Rescuers by Margery Sharp 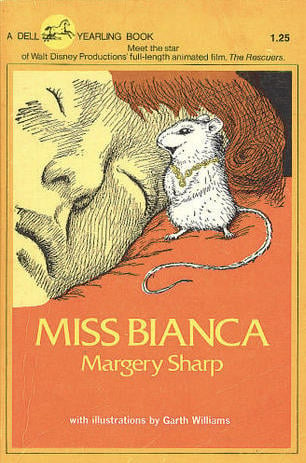