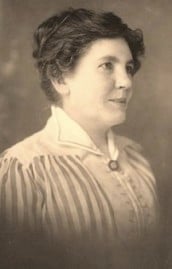 Laura Ingalls Wilder (February 7, 1867 – February 10, 1957) gained renown for her autobiographical writings reflecting her life as an American pioneer. Her Little House series of books have been beloved by generations of young readers.

Born in a log cabin on the edge of an area called “Big Woods” in Pepin, Wisconsin, her life was the inspiration for her novels and richly informed her memoirs.

The Ingalls family traveled by covered wagon through Kansas and Minnesota with all that they owned, until finally settling in De Smet, Dakota Territory. The family loved the open spaces of the prairie, where they farmed and raised animals.

The Ingalls moved around quite a bit, and though it wasn’t an easy life, it gave Laura a rich trove of memories and experiences to draw upon when she began writing. It may be comforting to aspiring writers of all ages that her first book wasn’t published until she was sixty-five!

Laura and Almanzo: Another long journey

Though Laura wasn’t conventionally educated, she managed to get her teaching certificate at the age of fifteen. Three years later, she married Almanzo Wilder, and helped her husband work the farm that they lived on.

In 1894, The couple and their seven-year-old daughter, Rose, made the journey from their drought-stricken farm in De Smet to a new farm in Mansfield, Missouri, where they settled permanently. She told of this journey in diary entries that were later published in On the Way Home.

The early years of Laura and Almanzo’s marriage are described in this excellent post, In Search of Laura, by Pamela Hill Smith:

“Laura and Almanzo’s first nine years of marriage were marred by economic hardship and personal loss. Both had diphtheria and Almanzo suffered a subsequent stroke, which left him permanently disabled.

As Rose later wrote, her father ‘limped through the rest of his ninety years and was never as strong as he had been.’

Laura and Almanzo’s second child—a son—died just a month after his birth in the summer of 1889, and a series of drought, fire, and financial crises forced the couple to move east to Minnesota, south to Florida, back to South Dakota, and ultimately to Mansfield, Missouri, in 1894.

They bought a piece of land, planted over 400 apple trees, and christened their new home Rocky Ridge Farm.’The couple lived out the rest of their lives there.” 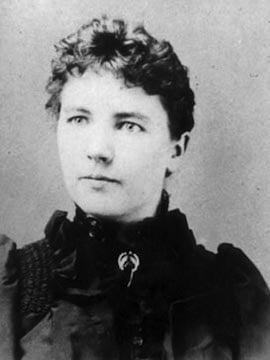 A brief glimpse of the real Laura

Prairie Fires: The American Dreams of Laura Ingalls Wilder, the Pulitzer Prize-winning biography by Caroline Fraser, opens with a compelling portrait of Laura in adulthood. Here she is, portrayed at age fifty-seven, shortly after her mother’s death:

“At fifty seven, Wilder was still far from becoming the emblematic figure of pioneer history. The woman whose life would become synonymous with the settlement of the West had spent most of her adult life living in the American South.

She was not yet famous, had not yet written a book; the only writing she had published was her farm paper column. Anxious, she suffered from nerves and had a recurrent nightmare of walking down a “long, dark road” into obscure woods, the path of poverty.

… She had a sharp temper and a dry humor … Judgmental of others, she could be humble, even self-excoriating. She was parsimonious to a fault, but when she went into town she dressed elegantly in full skirts, lace collars, and hats garlanded with feathers or flowers. She favored long, dangling earrings, fastening her blouses with a cameo brooch. She loved velvet. 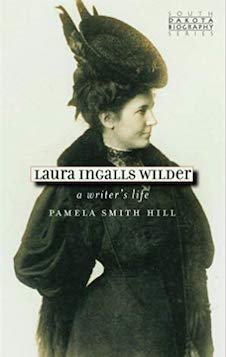 She was not an intellectual, but she had an intellect. She had never graduated from high school, but had studied with passion and vigor the Independent Fifth Reader.

She knew a song for every occasion and passages of Shakespeare, Longfellow, Tennyson, Scott, Swinburne, and the Brownings. Books took pride of place in her living room, on custom-built shelves beside a stone hearth.

As her fifties drew to a close, she stood at a turning point. The first act of her life was long over. Her childhood had been packed with incident: Indian encounters, prairie fires, blizzards, a virtual compendium of American frontier life … She married at eighteen and was a mother a year later.

By age of twenty-one, she know that everything she had ever had, no matter how hard-won, held the capacity to be lost. After a series of disasters, she and her husband left the Dakotas to rebuild seven hundred miles south, a long climb out of poverty constituting her life’s second act.” 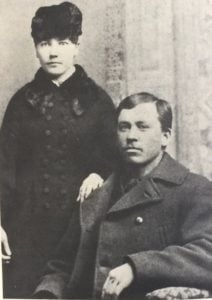 Laura and Almanzo at about the time they married

The Little House series of books

Drought, crop failure, and Almanzo’s illness put the Wilders in a precarious position. Finally, in the 1920s, Laura got encouragement from her daughter Rose as well as the time that she needed to start writing.

The family depicted in the stories was an idealized version of the one she grew up in. The Little House books tell of a family, not unlike her own, pioneering the Great Plains in the mid-1800s.

Life was simple but good, yet of course, had its challenges. Little House in the Big Woods begins when the eponymous Laura is five years old; the family is headed by Ma and Pa, and rounded out by two sisters, Mary and Carrie. 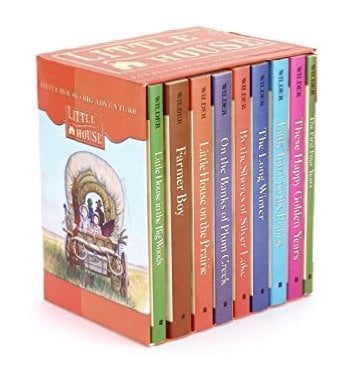 The series continues with By the Shores of Silver Lake and The Long Winter. In Little House on the Prairie, perhaps the best known in the series, Laura comes of age and becomes a teacher. Next comes These Happy Golden Years, in which Laura marries Almanzo and they move to their own home.

Laura Ingalls Wilder’s tales immediately appealed to readers of all ages — nine in the Little House series in all. The books were an immediate critical and popular success, winning numerous awards and making their way into the hearts of generations of readers with their message of endurance, simple living, and love of family.

Though presented as fiction, the author insisted, “I lived everything I wrote.”

The series, described by the publisher, Harper Trophy:

Little House in the Big Woods
Meet the Ingalls family—Laura, Ma, Pa, Mary, and baby Carrie, who all live in a cozy log cabin in the big woods of Wisconsin in the 1870s. Though many of their neighbors are wolves and panthers and bears, the woods feel like home, thanks to Ma’s homemade cheese and butter and the joyful sounds of Pa’s fiddle.

Little House on the Prairie
When Pa decides to sell the log house in the woods, the family packs up and moves from Wisconsin to Kansas, where Pa builds them their little house on the prairie! Living on the farm is different from living in the woods, but Laura and her family are kept busy and are happy with the promise of their new life on the prairie.

On the Banks of Plum Creek
The Ingalls family lives in a sod house beside Plum Creek in Minnesota until Pa builds them a new house made of sawed lumber. The money for the lumber will come from their first wheat crop. But then, just before the wheat is ready to harvest, a strange glittering cloud fills the sky, blocking out the sun. Millions of grasshoppers cover the field and everything on the farm, and by the end of a week, there is no wheat crop left.

By the Shores of Silver Lake
Pa Ingalls heads west to the unsettled wilderness of the Dakota Territory. When Ma, Mary, Laura, Carrie, and baby Grace join him, they become the first settlers in the town of De Smet. Pa starts work on the first building of the brand new town, located on the shores of Silver Lake.

The Long Winter
The first terrible storm comes to the barren prairie in October. Then it snows almost without stopping until April. With snow piled as high as the rooftops, it’s impossible for trains to deliver supplies, and the townspeople, including Laura and her family, are starving. Young Almanzo Wilder, who has settled in the town, risks his life to save the town. 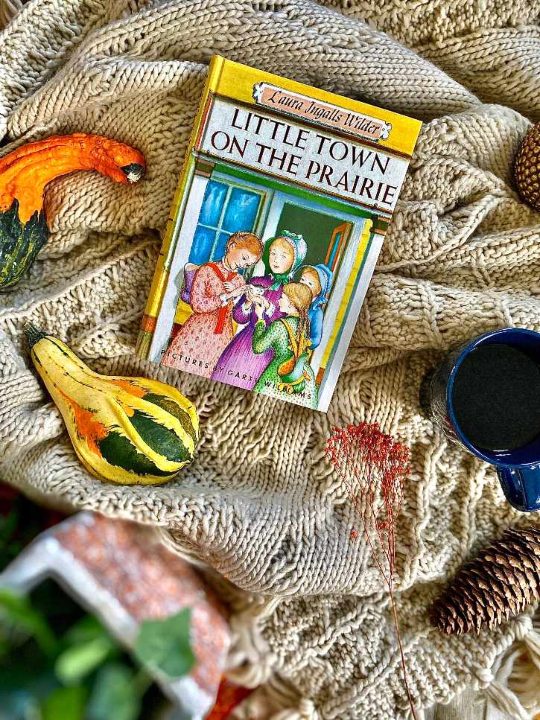 Little Town on the Prairie
De Smet is rejuvenated with the beginning of spring. But in addition to the parties, socials, and “literaries,” work must continue. Laura spends many hours sewing shirts to help Ma and Pa get enough money to send Mary to a college for the blind. But in the evenings, Laura makes time for a new caller, Almanzo Wilder.

These Happy Golden Years
Laura must continue to earn money to keep Mary in her college for the blind, so she gets a job as a teacher. It’s not easy, and for the first time she’s living away from home. But it gets a little better every Friday, when Almanzo picks Laura up to take her back home for the weekend. Though Laura is still young, she and Almanzo are officially courting, and she knows that this is a time for new beginnings.

The First Four Years
Laura Ingalls and Almanzo Wilder have just been married! They move to a small prairie homestead to start their lives together. But each year brings new challenges—storms, sickness, fire, and unpaid debts. These first four years call for courage, strength, and a great deal of determination. And through it all, Laura and Almanzo still have their love, which only grows when baby Rose arrives.

Plus, often added to the series is this ninth entry, based on her husband’s early years:

Farmer Boy
As Laura Ingalls is growing up in a little house in Kansas, Almanzo Wilder lives on a big farm in New York. He and his brothers and sisters work hard from dawn to supper to help keep their family farm running. Almanzo wishes for just one thing—his very own horse—but he must prove that he is ready for such a big responsibility. 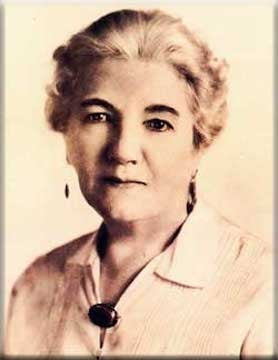 Accusations of racial insensitivity have been leveled at the Little House books and their author. In an article in Smithsonian magazine timed for Laura’s 150th birthday — “Little House on the Prairie was Built on Native American Land” —it’s suggested that “It’s time to take a critical look at her work.”

Many readers are unhappy about this, suggesting that she was merely “a woman of her time.” But the article argues:

“Portrayals of Native American characters in this book and throughout this series have led to some calls for the series to not be taught in schools.

In the late 1990s, for instance, scholar Waziyatawin Angela Cavender Wilson approached the Yellow Medicine East school district after her daughter came home crying because of a line in the book, first attributed to Gen. Phil Sheridan, but a common saying by the time: ‘The only good Indian is a dead Indian.’ Her story gained national attention.”

The legacy of Laura Ingalls Wilder

Laura enjoyed a 64-year marriage with her husband Almanzo. Rose, their only daughter, was said to have played a fairly substantial role in making Laura’s books the eminently readable works of children’s literature that they became. Some have been less kind about Rose’s role in her mother’s writing career, and there have been numerous controversies around this issue.

The Wilder family, who had lost nearly everything in the early years of the Depression, became very wealthy indeed upon the publication of the Little House books. But in the end what matters is how beloved these books have been for generations of readers.