The Eye of Love by Margery Sharp 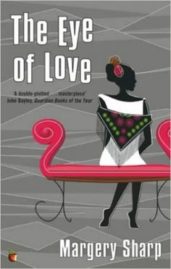 From the 1957 Little, Brown edition of The Eye of Love by Margery Sharp:  She was his lovely Spanish rose, the most beautiful woman he had ever beheld. He was her bluff King Hal, tall and handsome, the masterful lover of her dreams.

Only Margery Sharp, author of Cluny Brown and Britannia Mews could have written this civilized, witty, and wise story of Harry Gibson and Dolores Diver, a pair of lovers who always saw each other — no matter how others might see them — with the eye of love.

Harry and Dolores might have gone on forever, romantically unwed, leading the quietest of unlawful lives together. For ten years they had seen each other faithfully two nights a week. They might have gone on doing so, too much in love to be hurt by cruel time, but they couldn’t, for stern reality suddenly intruded on their rosy dream.

Miranda Joyce was the still unmarried daughter of old Mr. Joyce, one of the more prosperous merchants in Bond Street. And it occurred to Harry’s mother that if a marriage could be arranged between her son and the eager Miranda it would be the salvation of his expiring firm. 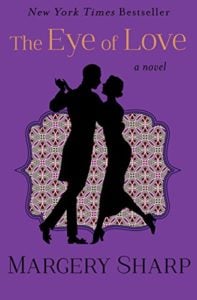 Dury is, after all, duty

Of course, Harry had to go along with the idea. He was British, after all  — if only second generation — and he know that Duty is Duty. Whereas, as every Englishman knows, love is only love. Dolores understood perfectly. She was British too, although she could not keep from weeping.

So Harry would marry another woman, whom he didn’t love. As for Dolores, what would happen to her? She had no money and Harry had none to give her.

Then there was Martha, Dolores’s nine-year-old niece, to be looked after. Only, Martha had ideas of her own about that. An independent spirit who looked at the world with her own sort of “eye of love,” she ranks with the most delightful of Margery Sharp’s characters.

The story that follows — of the surprising friendship which spring up between old Mr. Joyce and his prospective, unenthusiastic son-in-law; of Martha’s bringing the strange Mr. Phillips to lodge with her aunt; of the unexpected and hilarious result of jealous Miranda’s search for the Spanish Rose — is a novel of rare comedy mixed in the gentlest way with tears. 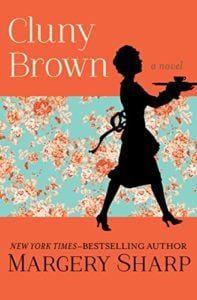 More about The Eye of Love by Margery Sharp