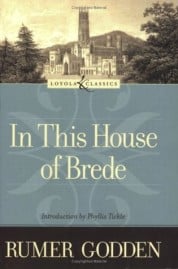 Rumer Godden was born in Sussex County, England, but spent the greater part of her childhood in India. The first of her books to be widely read in America was Black Narcissus (1939), her third novel. In This House of Brede , published three decades and many novels later, took her three years to write.

To facilitate and authenticate the gathering of her material, Miss Godden was allowed to live at the gates of a Benedictine monastery in England, and to have help and advice from the nuns.

Rumer Godden published many novels and several memoirs including such favorites as An Episode of Sparrows and The Greengage Summer, as well as short stories, poems, children’s books, and the autobiographical Two Under the Indian Sun and A House With Four Rooms.

From the 1969 Viking Press edition of In This House of Brede by Rumer Godden: Philippa Talbot is a successful London career woman turned forty when she feels the call of the religious life. “I though I was very well as I was,” she told the Brede Sacristan later, “a human, balanced person with a reasonable record; with the luck of having money, friends, love.

Only suddenly it wasn’t enough.” She is one of the most attractive and sympathetic characters in Rumer Godden’s long and well-loved fictional roster. This is a story of the life in an enclosed house of nuns and of the relevance of this contemplative existence to our changing world.

The novel unfolds chiefly through Philippa, from the day of her entrance, through one crisis of mind and heart to another, until she faces an ultimate and almost unbearable sacrifice.

Woven with her personal story is a much larger one — the story of the House, its history, and the present inmates who have vowed to live and die within its walls.

The nuns are English Benedictines whose House is centuries old in tradition, a stronghold of faith and prayer, yet they are up-to-date, alive, aware of the world. In Rumer Godden’s hands, they are fully realized individuals whom we come to know and care about, adding rich dimensions to the novel as they live out their vocations.

Through them, the book gives us on the outside a picture of how everyday religious life is lived, day in, layout “without sloth or haste” as St. Benedict’s Rule lays down.

Part of the novel’s attraction is its clear and abundant showing off the meaning of life to those who live it, of its rules and ritual. It is the mark of Rumer Godden’s unique magic that she immerses the reader wholly and unforgettably in the cloistered yet universal existence of her House of Brede. 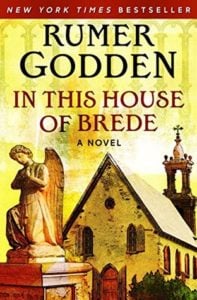 Come join Philippa Talbot, and, under Rumer Godden’s astute, loving, and devout guidance, find out exactly what it is like to enter an abbey, learn its rules and abide by therm, and fit yourself into the exacting, demanding life of about a hundred Benedictine nuns.

Mrs. Talbot, we learn in the prologue (seventeen pages of beautifully written, stirring, overflowing with the bright promise of what is to come) has been employed in a position higher than most women could reach in the Ministry of Trade and Information in London. The time is some year in the early 1950s; and, as we near the end of this story that covers about fifteen years, we are oriented chronologically in the outer world by the death of Pius XII and the succession of John and later Paul to the papacy.

Mrs. Talbot keeps her plan a secret from subordinates like the doting Penelope Stevens, but they guess that something extraordinary is up, for Mrs. Talbot gives away a cherished painting from the wall of her office; also a ring and a favorite watch.

She goes out, takes a cab, then a train, smokes her last cigarette, drinks her last cocktail, and enters the House of Brede. Its few acres, its pond, gardens, and orchard, its vaulted halls and cloister, its choir and church, its primitive cells are expected to be her home and refuge until she dies.

… There are troubled human beings who suffer the pangs of the damned because of their too worldly unreligious natures. They are ambitious, opinionated, and not so submissive as the must be to the abbess and other superiors. One nun loves another too unwisely an abbess has committed her house to an expenditure it cannot afford; a non has been deceitful; another has been too insensitive to the hurt that true love can bring.

The thread that ties all this together is Philippa — a wife, a mother, who tragically loses her only son, a successful career woman with a lover she cannot endure to surrender and cannot any longer welcome to her arms. But the story is not in the plot, though plot is here very actively for those who want it.

The interest of all this lies in the everlasting, immortal matters that are broached, considered and toyed with in utterly fascinating small talk. These women are not demanding salvation or everlasting life or sanctity so much as they are longing to offer themselves to doing good in the abstract. They want the best and nothing less, but they do stumble. 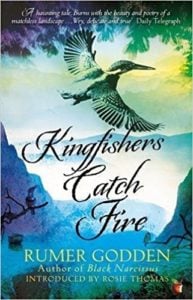 More about In This House of Brede