Quotes from The Good Earth by Pearl S. Buck 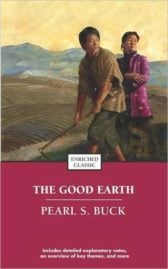 Pearl S. Buck (1892 – 1973) was an American author of fiction and nonfiction, humanitarian, and human rights advocate. She was also the first American woman to win the Nobel Prize in Literature. Following are quotes from The Good Earth, a classic novel that’s still widely read and studied.

Buck had a prolific career, authoring some seventy books, and was also a dedicated human rights advocate, founding the East and West Association in 1941.

The Good Earth,Pearl Buck’s second novel, is her best-known work and remains the one that defined her place in American literature. It received both the Pulitzer Prize and the Howells Medal in 1932.

“And roots, if they are to bear fruits, must be kept well in the soil of the land.”

“It is the end of a family — when they begin to sell their land. Out of the land we came and into we must go — and if you will hold your land you can live — no one can rob you of land.”

“Hunger makes thief of any man.”

“And out of his heaviness there stood out strangely but one clear thought and it was a pain to him, and it was this, that he wished he had not taken the two pearls from O-lan that day when she was washing his clothes at the pool, and he would never bear to see Lotus put them in her ears again.” 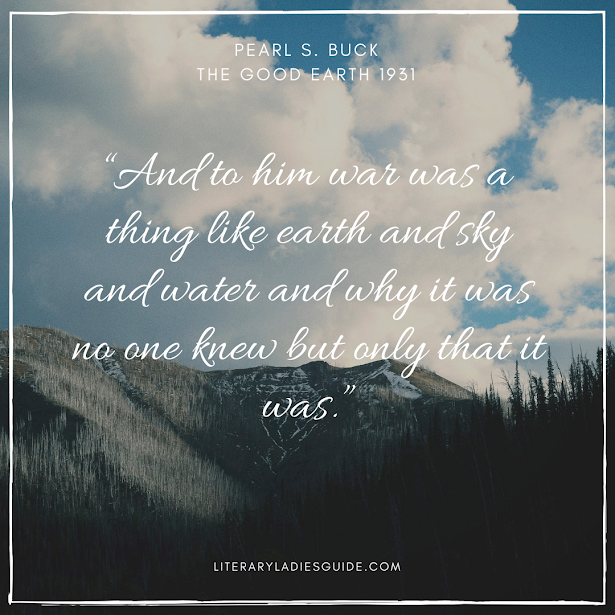 “But hers was a strange heart, sad in its very nature, and she could never weep and ease it as other women do, for her tears never brought her comfort.”

“When I return to that house it will be with my son in my arms. I shall have a red coat on him and red-flowered trousers and on his head a hat with a small gilded Buddha sewn on the front and on his feet tiger-faced shoes. And I will wear new shoes and a new coat of black sateen and I will go into the kitchen where I spent my days and I will go into the great hall where the Old One sits with her opium, and I will show myself and my son to all of them.”

“And to him war was a thing like earth and sky and water and why it was no one knew but only that it was.” 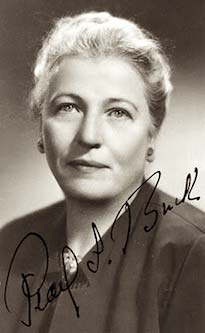 “So Wang Lung sat, and so his age came on him day by day and year by year, and he slept fitfully in the sun as his father had done, and he said to himself that his life was done and he was satisfied with it.”

“It is but another war somewhere. Who knows what all this fighting to and fro is about? But so it has been since I was a lad and so will it be after I am dead and well I know it.”

“Yes, but there was the land. Money and food are eaten and gone, and if there is not sun and rain in proportion, there is again hunger.”

“Then the good land did again its healing work and the sun shone on him and healed him and the warm winds of summer wrapped him about with peace.”

“Wang Lung sat smoking, thinking of the silver as it had lain upon the table. It had come out of the earth, this silver, out of his earth that he ploughed and turned and spent himself upon. He took his life from this earth; drop by drop by his sweat he wrung food from it and from the food, silver.

Each time before this that he had taken the silver out to give to anyone, it had been like taking a piece of his life and giving it to someone carelessly. But now for the first time such giving was not pain. He saw, not the silver in the alien hand of a merchant in the town; he saw the silver transmuted into something worth even more than itself—clothes upon the body of his son.”

“Yet never could he grasp her wholly, and this it was which kept him fevered and thirsty, even if she gave him his will of her.”

“There in that land of mine is buried the first good half of my life and more. It is as though half of me were buried there, and now it is a different life in my house.”

“It seemed to him that now his life was rounded off, and he had done all that he said he would in his life and more than he could ever have dreamed he could.” 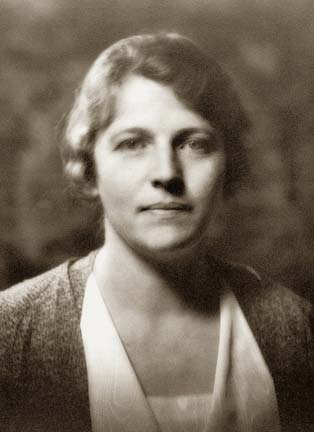 “When people in the city become fearful, the city life becomes more and more unbearable to Wang Lung who constantly yearns for the land. He even thinks seriously about selling his daughter if only it would enable him to return to his land.”

“Wang Lung forgets the land for awhile when he is sick in love with Lotus. When Lotus comes to his house, he is plagued by various domestic problems, but when the waters in the fields recede and Wang Lung is able to work his land, he is immediately healed of his sickness. Earth is a healing agent for Wang Lung.”

“Wang Lung is so attached to his land that despite the threat his bandit uncle poses to his family, he cannot move to town for fear of living without his land close by.”

More about Pearl Buck on this site