Quotes by Gwendolyn Brooks on Poetry and the Poet’s Life 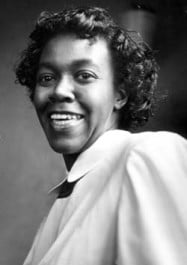 Gwendolyn Brooks (1917 – 2000), the multi-award-winning American poet created a significant body of poems reflecting African-American life. Following is a selection of quotes by Gwendolyn Brooks on poetry and the poet’s life.

Brooks’  lifetime output encompassed more than twenty books, including children’s books. In 1950 she won the Pulitzer Prize for poetry, becoming the first African-American to do so.

In 1968, Brooks was named Poet Laureate for the state of Illinois. From 1985 to 1986 she was Consultant in Poetry to the Library of Congress.

In addition to sonnets, ballads, and rhythmic free verse, she also had some wise words about writing and life in prose. Though her work reflected urban African-American life, its underlying themes were universal to the human experience.

“I felt that I had to write. Even if I had never been published, I knew that I would go on writing, enjoying it and experiencing the challenge.”

“We don’t ask a flower any special reason for its existence. We just look at it and are able to accept it as being something different from ourselves.”

“Writing is a delicious agony.”

“My father provided me with a desk … with many little compartments, with long drawers at the bottom, and a removable glass-protected shelf at the top, for books. Certainly, up there, holding special delights for a writing-girl, were the Emily of New Moon books, L.M. Montgomery’s books about a Canadian girl who wrote, kept notebooks even as I kept notebooks, dreamed, reached.

Of course I would be a poet! Was a poet! Didn’t I write a poem every day? Sometimes two poems?”

(Report from Part One by Gwendolyn Brooks, 1972)

“The people in the workshops have told me, over and over again, that they had hated poetry because they were forced to memorize it in elementary school and high school, and it was presented as something heavy, to be gotten through for the sake of grades. The thing I am interested in doing is in presenting poetry as a living thing, an instrument of pleasure, of release, and they enjoy it when it’s given to them that way.” (Conversations by Roy Newquist, 1967)

“A poem rarely comes whole and completely dressed. As a rule, it comes in bits and pieces. You get an impression of something, and you begin, feebly, to put these impressions and feelings and anticipation or remembering into those things which seem so common and handleable — words.

And you flail and you falter and you shift and you shake, and finally, you come forth with the first draft. Then, if you’re myself and if you’re like many of the poets that I know, you revise, and you revise. And often the finished product is nothing like your first draft. Sometimes it is.”

(Interview with Gwendolyn Brooks, from In the Memory and Spirit of Frances, Zora, and Lorraine: Essays and Interviews on Black Women and Writing, ed. by Juliette Bowles, 1979)

“ I want to write poetry that will appeal to many, many Blacks, not just the Blacks who go to college but also to those who have their customary habitat in taverns and in the street — people who have grown up feeling that poetry was not for them, but who are able to enjoy poetry if it seems to them relevant to what they know of life.”

(“Update on Part One: An Interview with Gwendolyn Brooks,” with Gloria T. Hull and Posey Gallagher, 1977)

“I don’t sit down and say, ‘I am now going to write a poem by, about, and to all Blacks.’ I am myself. I am consumed with the passion of ideas that I came to believe in, in the late sixties. They are now built into myself. I am THAT — so anything that I write is going to issue from a concern with and interest in Blackness and its progress.”

(“Update on Part One: An Interview with Gwendolyn Brooks,” with Gloria T. Hull and Posey Gallagher, 1977)

“A poet is one who distills experience — strains experience. A poet looks — sees. Poets oblige themselves to see. Poetry is siren, prose is survey. I keep telling children: Poetry comes out of life.

What happened to you yesterday and last week and six years ago and ten minutes ago and what you surmise may happen tomorrow is poetry-in-the-rough. Strain it — distill — work the magic of carefully-chosen words upon it — and there’s poetry.”

“I’ve written so many poems that I believe some of them will stay alive. People write me wonderful letters saying this poem or that poem has meant very much to them and in some cases has changed their direction. So I hope I’ll still be useful when I’m no longer here.”

(Interview with Gwendolyn Brooks, broadcast on “New Letters in the Air,” November, 1988) 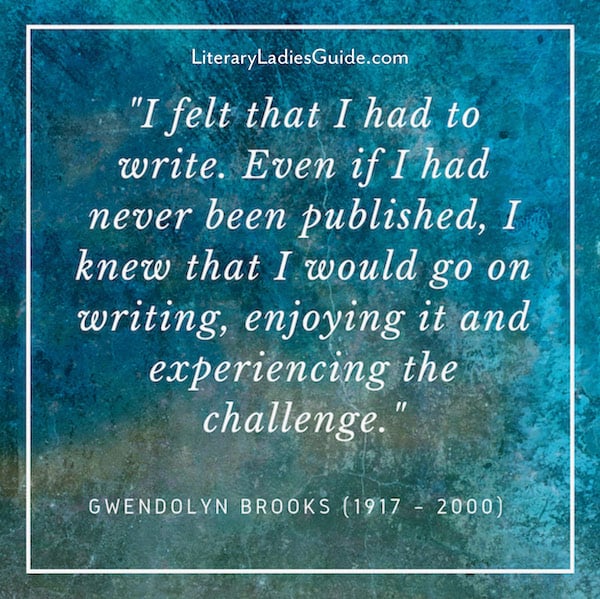 “I am interested in telling my particular truth as I have seen it.”

“I am a writer perhaps because I am not a talker.”

“A writer should get as much education as possible, but just going to school is not enough; if it were, all owners of doctorates would be inspired writers.” 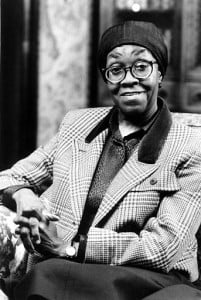 “Very early in life I became fascinated with the wonders language can achieve. And I began playing with words.”

“Does man love Art? Man visits Art, but squirms. Art hurts. Art urges voyages — and it is easier to stay at home, the nice beer ready.” (The Chicago Picasso, 1967)

“Words can do wonderful things. They pound, purr. They can urge, they can wheedle, whip, whine. They can sing, sass, singe. They can churn, check, channelize. They can be a “Hup two three four.” They can forge a fiery army of a hundred languid men.”

“I believe we should all know each other, we human carriers of so many pleasurable differences. To not know is to doubt, to shrink from, sidestep or destroy.”

“Truth-tellers are not always palatable. There is a preference for candy bars.”

“My mother took me to the library when I was about four or five. I enjoyed reading poetry and I tried to write it when I was about seven, at the time that I first tried to put rhymes together.  And I have loved it ever since.”

“I don’t want to say that these poems have to be simple, but I want to clarify my language. I want these poems to be free. I want them to be direct without sacrificing the kinds of music, the picture-making I’ve always been interested in.”