Ayn Rand (February 2, 1905 – March 6, 1982), American author born in St. Petersburg, Russia. Originally named  Alisa Rosenbaum, she was a bookish child who loved stories and started writing her own when still quite young.

Later, as a widely read (if not critically acclaimed) author, she became known for ponderous novels like The Fountainhead and Atlas Shrugged, which were based on the philosophical tenets of Objectivism, which she developed.

Her novels’ leading men were mouthpieces for her objectivist views — especially Howard Roark in The Fountainhead and John Galt in Atlas Shrugged. Her philosophy, as she defined it was, “The concept of man as a heroic being, with his own happiness as the moral purpose of his life, with productive achievement as his noblest activity, and reason as his only absolute.”

The Virtue of Selfishness, the title of one of her best-known works of nonfiction, sums up what made Rand tick. She championed rugged individualism in her novels and nonfiction writings.

And though she created strong female characters, their initial sexual encounters with their male counterparts bordered on rape. She was against what what was at the time called “women’s lib,” now referred to as second-wave feminism.

From Alisa Rosenbaum to Ayn Rand

At the start of the Russian Revolution in 1917, the 12-year old Alisa looked out her bedroom window in St. Petersburg, or so she claimed later, and witnessed men being shot in the street. The Rosenbaum family fled to Crimea, a Russian state.

She knew early that she wanted to be a writer. In the convening years, fraught and chaotic, her father’s business was nationalized. This early experience was at the heart of her scorn held for Collectivism, the system of ownership and control of production by the government.

Alisa Rosenbaum returned to Petrograd (formerly St. Petersburg) after the Revolution to attend college, where she studied history, politics, and law.

In 1926, she left Russia for the United States, ostensibly to visit relatives, and vowed to stay. Soon after, she changed her name to Ayn Rand. “Ayn” was after a Finnish writer.

Making her way to Hollywood she worked various jobs before she finally became a screenwriter. She married a bit-part actor, Frank O’Connor, when her visa ran out in 1929.

We the Living and The Fountainhead

In 1936 Rand published her first novel, We the Living, which told of her life in in the Soviet Union.

The Fountainhead took her seven years to write, and after multiple rejections, it was published in 1943. It became a huge best-seller, with millions of copies in print around the globe in a short time. Critics weren’t always kind to the tome of 700 pages plus, but readers — and Hollywood — felt otherwise. In 1949 a film version came out; Rand wrote the screenplay, and kept it faithful to the book.

The Fountainhead is the story of architect Howard Roark, whose sole aim is to build the way he wants to build, as a typical 1943 review put it:

“… not in the tradition of the past, but only in the tradition of Howard Roark. No opinion except his own either disturbed or influenced him. Perhaps that is why he was hated by the people who know him best — hated because he needed no one, wanted no one. A dramatic story based on an uncompromising belief in the importance of the individual — and on the provocative idea that man’s ego is the fountainhead of progress.” (News-Journal, Mansfield, Ohio, July 18, 1943)

Rand is well known for having developed Objectivism, a philosophy that embraces laissez-faire capitalism and the pursuit of rational self-interest, to put it in a nutshell. Atlas Shrugged (1957) weaves aspects of that philosophy into its ponderous fictional plot. The contemporary political movement, Libertarianism, has roots in Objectivism.

The novel takes place in a hypothetical version of the United States where private businesses are suffering due to harsh regulations and laws. Dagny Taggart and Hank Reardon, tycoons and lovers, struggle to fight against looters who are aiming to profit from their productivity.

In their battle to protect their business, they discover that a strange man named John Galt is attempting to persuade other business owners to leave their companies as a strike against the looters. Towards the end of the novel, the strikers use Galt’s philosophy of reason and individualism to create a new capitalist society.

Atlas Shrugged  is a philosophical novel that examines multitude of complex issues. Rand, never one for modesty, claimed that it was the most important book ever written. Critics felt otherwise. But as with her other books, readers disagreed and it went on to sell millions of copies around the world.

In spite of the fact that many critics at the time considered it, as one wrote,”a stupid and dangerous book,” it later made lists of the most influential books of the twentieth century.

Rand was an anti-feminist, though for someone who prided herself on rational thought, her reasoning seems fuzzy:

“I’m against women’s lib, as you know … It’s making an issue of an anatomical feature of your gender … I am against classifying anyone on anatomical, physiological grounds … What makes you human is your mind, and that is in your control; that’s what you are to be judged on.” (from an interview in the Newark Advocate, January 16, 1975)

Though Rand still has, and likely will also have, devotees in the political right, contemporary critics have downplayed her importance by marginalizing the kind of thought she promulgated.

One recent example is this New Yorker article, The Persistent Ghost of Ayn Rand, the Forebear of Zombie Neoliberalism. In this piece, which references one of the most recent books on Rand’s legacy, Mean Girl: Ayn Rand and the Culture of Greed, Masha Gessen writes:

“Rand’s novels promised to liberate the reader from everything that he had been taught was right and good. She invited her readers to rejoice in cruelty. Her heroes were superior beings certain of their superiority. They claimed their right to triumph by destroying those who were not as smart, creative, productive, ambitious, physically perfect, selfish, and ruthless as they were. Duggan calls the mood of the books ‘optimistic cruelty.’

They are mean, and they have a happy ending—that is, the superior beings are happy in the end. The novels reverse morality. In them, there is no duty to God or one’s fellow-man, only to self. Sex is plentiful, free of consequence, and rough. Money and other good things come to those who take them …” 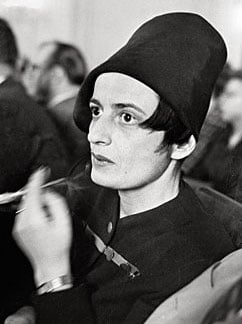 The Legacy of Ayn Rand

“She is important for the powerful influence her ‘objectivist’ philosophy has had in the America of the 1950s and 1960s, particularly though not only among college students. Her views, for which she has strongly proselytized, are a variant on the superman theory: she urges the rational recognition of self-interest, the limitation of emotional and altruistic judgements, and the uses of enlightened selfishness.

Her position has strong conservative overtones. Her novels, which are polemical, usually show heroes in industry or town planning standing out against the common herd.”

Rand’s novels and non-fiction work have remained classics despite (or because of) the controversial views they espouse, and many are still in print and continue to sell. She and her philosophies inspired modern-day Libertarianism, and she has continued to be a heroine to various right-wing political groups. Libertarians might like to know that she scorned them, once calling them “emotional hippies-of-the-right who seek to play at politics without philosophy.”

Her UPI (United Press International) obituary summed up her prominent works and ideas as follows:

“Miss Rand’s novels strongly expressed the belief that original ideas are what keep the world running, and those who have such ideas should be free to profit from them. Her economic philosophy was based on self-interest, individualism, and the free market — a creed she called ‘rational selfishness.’

… Miss Rand once said that the right to life, liberty, and the pursuit of happiness meant ‘man’s right to exist for his own sake, neither sacrificing himself to others, nor sacrificing others to himself.’ In the 1960s, she increasingly devoted her writing to her philosophical views in such books as The Virtue of Selfishness and Capitalism: The Unknown Ideal.

Ayn Rand: How is This Still a Thing (Last week tonight with John Oliver)