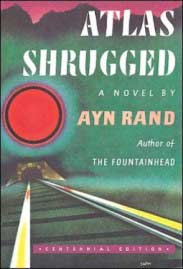 Atlas Shrugged  (1957) is a philosophical novel by Russian-born Ayn Rand that examines a multitude of complex issues. Rand, never one for modesty, claimed that it was the most important book ever written. Critics often felt otherwise. Where Atlas Shrugged was concerned, readers disagreed; it sold millions of copies around the world.

In spite of the fact that many critics at the time considered it, as one wrote,”a stupid and dangerous book,” it later made lists of the most influential books of the twentieth century. Here are two reviews from the time of its publication — the critics can barely contain their sarcasm:

The world is a ball and chain

From the original review of Atlas Shrugged by Ayn Rand in the La Crosse Tribune, October, 1957, by H.G. Rogers:  Bearing on his bowed shoulders an ungrateful world that grows heavier and heavier, Atlas shrugs and lets it fall to destruction — and a proper comeuppance it is by the tens of Ayn Rand’s ideology.

Atlas, according to what some readers will regard as a monolithic conception, is the rich man, the doer, the builder, and material creator. In this novel he is Rearden, inventor or Rearden Metal, his counterpart in what is by no means the weaker sex is Dagny Taggart; John Galt stands for the spirt of their heroism.

They find the world is their ball and chain; they are fettered by social movements, sissy notions about the majority and the good of the majority, or utopian theories that would require a businessman to look out for the welfare of his employees.

In the course of a highly involved and unlikely plot developed with a maximum of wordiness, Miss Rand expresses considerable contempt for books that sell only 3,000 copies.

Many critics disliked Atlas Shrugged when it was first published,
though some reviews were kinder, such as this one
. . . . . . . . .

A soap box of a novel

From original review in the Ogden Standard-Examiner, October, 1957, by Luise Putcamp, Jr.: Ayn Rand has an idea about what could go wrong with this country, and she has built herself an impressive soap box in a 1,168-page novel called Atlas Shrugged.

In Miss Rand’s book the country is curiously desolate, as in a depression. Factories are closing, things wear out and can’t be replaced, welfare staters are taking over. And people merely shrug and mumble a mysterious catchphrase: “Who is John Galt?”

The noble rich vs. the chiseling rich

Ranked against those who live to soak the rich are the noble rich, people like Hank Reardon the steel tycoon and Dagny Taggart, the lady railroad executive. They’ve worked hard for theirs and they work on on contempt of the chiselers. But others of their ilk mysteriously disappear as things get worse.

Like Wyatt, the oil man, who leaved his fields afire. And then there’s the international copper magnate Francisco d’Anconia, who double-crosses the rest of the noble rich, but with the air of somebody who has method in his madness. 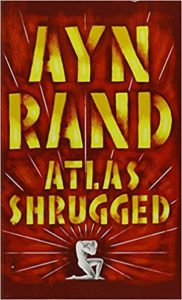 Who is John Galt?

Dagny’s symbol of hope becomes the wreck of a miraculous engine she finds in a ruined factory. Who invented it? Who is John Galt? Dagny hires the last young inventor with talent and integrity to seek the engine’s secret. When he, too, disappears she tries to follow and find who John Galt is.

Atlas Shrugged is an overpowering book with some peculiar faults. Miss Rand’s heroes and heroine make good use of her soap box. But often, not content with that, she climbs on it herself, for pages at a time. And these heroes and heroines are not real, but people in daydreams of themselves, bigger than life, always saying just the right thing as if from a stage.

The ideas in the book are masterfully suited to today and tomorrow. But they’re set in a curious yesterday, where apparently no air transport competes with railroad, and where television sets do not keep people from hanging on the words of their radios.

Miss Rand says of Atlas Shrugged that her famous novel, The Fountainhead was only an overture to this. People are going to be talking about this one, too, even though it’s more an angry tract than a novel.