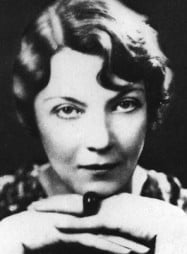 Published when Rhys was 76 and shaped by her Dominican heritage and reoccurring themes of exile, loss, alienation, sexual inequality, and enslavement, it imagines the descent into madness of Rochester’s white-Creole wife Antoinette (Bertha, “the madwoman in the attic”). It won the W.H. Smith Literary Award in 1967.

Rhys described her childhood as one spent “alone except for books” and with voices “that had nothing to do” with her.

Her father, William Potts Rees Williams, was a Welsh doctor. Her mother, Minna, a third generation Dominican with Scottish ancestry, was cold and disapproving towards her daughter, creating a sense of abandonment for young Jean that haunted her throughout her life.

Although an Anglican Protestant, Rhys attended a convent school, was fascinated by the Catholic rituals and also the integration of blacks and whites in church. The servants in her household offered the companionship her mother didn’t, while pulling her into the magic and mayhem of their Caribbean culture.

When Rhys was 16, she was sent to England to live with her aunt and attend the Perse School for Girls in Cambridge, a typical scenario for a young well-bred colonial woman. Jean embraced the adventure, while despising the cold, damp English climate in contrast to the warmth and lushness of the British West Indies.

Her classmates ridiculed her for being a foreigner, something which also troubled her when she briefly attended the Royal Academy of Dramatic Art and was told she would never “learn proper English.” For a time, she worked as a touring chorus girl under the names Vivienne, Emma, and Ella Gray, and even as a nude model. 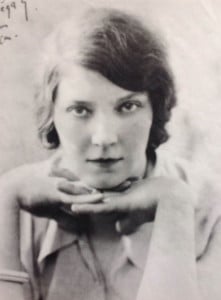 Rhys married three times. Her first husband, Jean Lenglet, a French-Dutch journalist, spy, and songwriter, occasioned her move to Paris and the couple frequently wandered around Europe. They had a son, who lived for only three weeks, and a daughter. In 1922 she met the American writer Ford Maddox Ford and, with his encouragement, she began to write short stories.

When her husband went to jail for “currency irregularities,” Rhys moved in with Ford and his partner, and had an affair with him fictionalized in her novel Quartet. She and Lenglet divorced in 1932.

Two years later she married Leslie Tilden Smith, an English editor, who died in 1945, and in 1947 she married Max Hammer, a solicitor who was sent to prison for fraud.

Better to be happy than a writer

Determinedly unconventional, Jean Rhys always found writing difficult and expressed that she would rather be happy than be a writer. She returned to Dominica only once, in 1936, visiting her grandfather’s plantation, the estate and his possessions destroyed during the 1844 “Census Riots” / ”La Guerre Negre.”

The house itself had been burned down by arsonists in 1930, a tragedy Jean integrated into Wide Sargasso Sea.

Her Caribbean roots also figured into her 1934 novelVoyage in the Dark and shorter fiction such as The Day They Burned the Books. Rhys kept a very low profile for a decade and a half, until the 1957 BBC dramatization of Good Morning, Midnight, a book that sold poorly after its initial publication in 1939.

Rhys lived out her later years in a small Devon village, finally free from financial worries, but unenthusiastic about her belated literary success with Wide Sargasso Sea.

The 1966 edition of Wide Sargasso Sea is introduced by Francis Wyndham, who was, until his own death, Rhys’s literary executor. Here, he offers further insight:

“For many years, Jean Rhys has been haunted by the figure of the first Mrs. Rochester — the mad wife in Jane Eyre. The present novel — completed after much revision and agonized rejections of earlier versions — is her story. Not, of course, literally so: it is in no sense a pastiche of Charlotte Brontë and exists in its own right, quite independent of Jane Eyre. But the Brontë book provided the initial inspiration for an imaginative feat almost uncanny in its vivid intensity.

From her personal knowledge of the West Indies, and her reading of their history, Miss Rhys know about the made Creole heiress in the early 19th century, whose dowries were only an additional burden to them: products of an inbred, decadent, expatriate society, resented by the recently freed slaves whose superstitions they shared, they languished uneasily in the oppressive beauty of their tropical surroundings, ripe for exploitation.”

Jean Rhys was working on her autobiography at the time of her death in May 1979 at the age of 88.

Her historical fiction A House Near Luccoli, which is set in 17th century Genoa and imagines an intimacy with the charismatic composer Alessandro Stradella, and its sequel To A Strange Somewhere Fled, which takes place in late Restoration England, were published by All Things That Matter Press, as were her Kindle short stories, The Snow White Gift and The Library Next Door. She is also the author of Without the Veil Between, a novel about Anne Brontë.

Diane has done the artwork for both her novels’ book covers, and published an illustrated poetry flower journal, A Friendship with Flowers. Visit her on the web at at DM Denton Author & Artist an BardessMDenton.