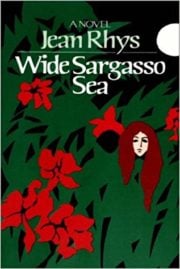 Wide Sargasso Sea by Jean Rhys is the last work by this Dominican-British author. Considered a prequel and response to Jane Eyre by Charlotte Brontë, the novella presents the perspective of Antoinette Cosway, the sensual Creole heiress who wound up as the “madwoman in the attic.”

Wide Sargasso Sea became her most successful novel, praised for its spare yet evocative language and its exploration of the power imbalance between men in women, between patriarchal colonizers and the original inhabitants of the Caribbean in the 1830s. It was the novel that rescued Rhys’s flagging reputation.

Antoinette Cosway, the story’s protagonist, is the daughter of white, slave-owning Creoles. When slavery was abolished in Dominica and Jamaica in 1833, they lost their fortune. The W.W. Norton edition describes the heart of the story:

“She is sold into marriage to the coldhearted and prideful Rochester, succumbs to his need for money and his lust. Yet he will make her pay for her ancestors’ sins of slaveholding, excessive drinking, and nihilistic despair by enslaving her as a prisoner in his bleak British home.

Jean Rhys’s reputation was made upon the publication of this passionate and heartbreaking novel, in which she brings into the light one of fiction’s most mysterious characters: the madwoman in the attic from Charlotte Brontë’s Jane Eyre.

In this best-selling novel, Rhys portrays a society so driven by hatred, so skewed in its sexual relations, that it can literally drive a woman out of her mind.”

The slim novel is a response to Jane Eyre, and quite sympathetic to Antoinette (who Rochester begins to call “Bertha,” after her mentally ill mother).

We come to understand the first Mrs. Rochester

Wide Sargasso Sea isn’t “fan fiction” in the modern sense, since it can stand alone as a reading experience. Nonetheless, for devotees of Jane Eyre, it imaginatively portrays the character of Mrs. Rochester (Bertha), who readers might find fearsome, even monstrous.

This novel makes us understand how Bertha Rochester / Antoinette Cosway got to be who she was. Anyone who has felt uncomfortable about the first wife locked up in the attic in Charlotte Brontë’s classic novel will find Wide Sargasso Sea a cathartic experience, though the end result doesn’t change.

The point of view in the novel alternates between Antoinette and Rochester, though more from hers than his. Here, her thoughts from the attic in which her husband has imprisoned her:

“In this room I wake early and lie shivering for it is very cold. At last Grace Poole, the woman who looks after me, lights a fire with paper and sticks and lumps of coal.

She kneels to blow it with bellows. The paper shrivels, the sticks crackle and spit, the coal shoulders and glowers. In the end flames shoot up and they are beautiful. I get out of bed and go close to watch them and to wonder why I have been brought her. For what reason? There must be a reason. What is it that I must do?”

The 1966 edition of Wide Sargasso Sea is introduced by Francis Wyndham, who was, until his own death, Rhys’s literary executor. Here, he offers further insight:

For many years, Jean Rhys has been haunted by the figure of the first Mrs. Rochester — the mad wife in Jane Eyre. The present novel — completed after much revision and agonized rejections of earlier versions — is her story. Not, of course, literally so: it is in no sense a pastiche of Charlotte Brontë and exists in its own right, quite independent of Jane Eyre.

But the Brontë book provided the initial inspiration for an imaginative feat almost uncanny in its vivid intensity.

From her personal knowledge of the West Indies, and her reading of their history, Miss Rhys know about the made Creole heiress in the early 19th century, whose dowries were only an additional burden to them: products of an inbred, decadent, expatriate society, resented by the recently freed slaves whose superstitions they shared, they languished uneasily in the oppressive beauty of their tropical surroundings, ripe for exploitation.

The novel is divided into three parts. The first is told in the heroine’s own words. In the second, the young Mr. Rochester describes his arrival in the West Indies, his marriage to Antoinette Cosway and its disastrous result.

The last part is once more narrated by his wife, but the scene is now England, and she writes from the attic room in Thornfield Hall, the gloomy manse that we know from the story of Jane Eyre.

Jean Rhys’s books have shared a modern, urban background: Montparnasse cafés, cheap Left Bank hotels, Bloomsbury boarding-houses, furnished rooms near Notting Hill Gate area evoked with a bitter poetry that is entirely her own. Only the West Indian flashbacks in Voyage in the Dark and some episodes of The Left Bank strike a different note — one of regret for innocent sensuality in a lush, beguiling land.

In Wide Sargasso Sea, which is set in Jamaica and Dominica in the 1830s, she returns to that spiritual country as a distant dream: and discovers it, for all its beauty (and she conjures up the beauty with haunting perfection) to have been a nightmare.