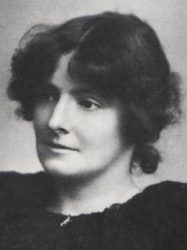 Born in Kennington, Surrey, a sister’s poor health compelled the family to move almost continually until she was in her late teens. An imaginative yet nervous child, the family’s peripatetic ways would have an impact on the stories she eventually became famous for.

At eighteen, Edith married Hubert Bland. Though the couple had five children, the marriage was an unstable one, marked by Bland’s philandering and inability to make a living.

Edith published under the name E. Nesbit, producing more than forty books for children, and many more on which she collaborated. She also wrote eleven novels for adults and numerous short stories.

E. Nesbit is often credited with modernizing the classic children’s adventure story, infusing realism even when her tales included imaginary creatures or places. In that sense, she set the stage for the genre of contemporary fantasy.

Politically active, she was an adherent of Marxism. She co-founded the Fabian Society, a socialist group that was later connected with the British Labor Party.

An introduction to E. Nesbit and her work

The following biography, which contains much bibliographic material about E. Nesbit’s best-known books, is adapted from her autobiography Long Ago When I was Young (Franklin Watts, 1966). It was written by Mary Noel Streatfeild (herself the author of a classic children’s book series known as the “shoes” books, which began in 1936 with Ballet Shoes):

The “E” stood for Edith, but she was always called Daisy. From the time she was seven until she was twelve, she had no settled home. She was sent to boarding schools in Brighton and Sussex and in Stamford and Lincolnshire. Then, since the Nesbits were living in France, she was sent to a family in Pau who ha one little girl.

Then, as the family were still in France, to two different schools near Dinan and finally, when she was not yet twelve, to a school in Germany. In one way or another, all the schools were ill-chosen for the type of child she was.

The school in Germany she loathed so violently that she — the most nervous of children — actually tried to run away from it. For a girl of eleven, it took courage of a striking order.

Fortunately, though E. Nesbit died in 1924, some of her children lived on long after her and it was from this source that it was possible for her biographers to get an idea of what the young E. Nesbit was like. In her own reminiscences, Long Ago When I Was Young, she describes how nervous and sensitive a child she was, and also how temperamental.

She was one of those mercurial children — and was to be a mercurial grown-up — who is up in the sky at one moment and groveling as if in the mud the next. How much of herself and her storm-tossed childhood is in her books? 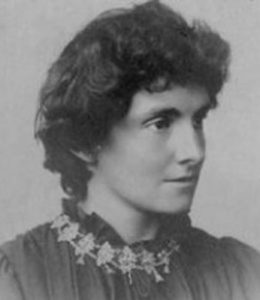 It is on the whole just the opposite side of the picture that comes out in her stories. Perhaps it was as a present to her child-self that E. Nesbit gave her fictional families such strong roots. Usually, there is a clearly described permanent home.

And, though the wildest adventures take place — some in everyday work and some in the world of magic — they are almost always shown in the context of a normal family life.

E. Nesbit was a curious writer. It was as if she hugged her characters, both children and magic creatures, to herself saying: “That’s all I’m going to tell you about that lot. Now I’ll tell you something new.”

She wrote three books, for instance, about the Bastable children —The Treasure Seekers, The Wouldbegoods, and The New Treasure Seekers. When she got to the end of the latter, she had Oswald, who was supposed to have written the book, write: “It is the last story the present author means ever to be the author of.” And it was. 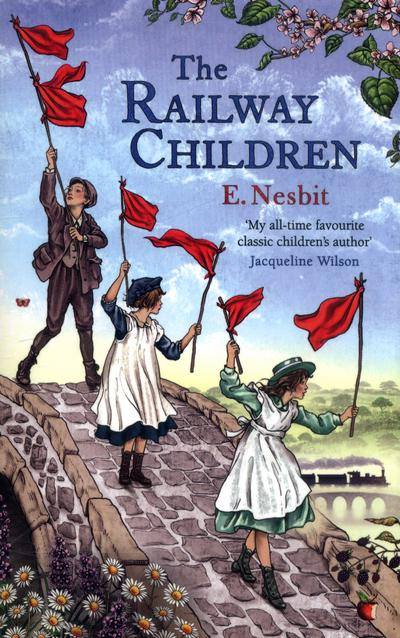 Five Children and It

Then there was the magic trilogy, Five Children and It, The Phoenix and the Carpet, and The Story of the Amulet. In these books, readers met Robert, Anthea, Jane, Cyril, and the baby called The Lamb.

It was first the Psammead and the Phoenix who Nesbit placed in the foreground.

This was deliberately and carefully done so that she, who created in the Bastables — one of the most vivid families in all of children’s literature — could be sure that the children in this trilogy were so faintly drawn that none of us would recognize them if we met them in the street, whereas nobody could miss either the Psammead or the Phoenix.

There is nothing remotely alike about E. Nesbit’s much-loved holiday home in France and Three Chimneys, the cottage in England in which the children in The Railway Children (1906) lived, but there is a connection in the reference to running wild. Until the railway children’s father was sent to prison they had lived a conventional existence — watched and looked after every moment of the day. The author writes:

“They were just ordinary suburban children and they lived with their Father and Mother in an ordinary red-brick-fronted villa, with coloured glass in the front door, a tiled passage that was called a hall, a bathroom with hot and cold water, electric bells, French windows, and a good deal of white paint, and ‘every modern convenience’ as the house agents would say.”

But when the children came to live in Three Chimneys, all these things vanished. There were no modern conveniences at all, not even running water. But what child cares about such things?

What was thrilling for the children was that there was no school and no one to look after them. Mother supported her children just as Nesbit had supported hers, by writing, so she had to leave them to their own resources. All of every day was theirs to use exactly as they liked.

They had no raft on a pond on which to travel and explore, as had Nesbit and her brothers during the summer holiday in France, but they had a railway — and oh, what a joy that was.

The House of Arden and Harding’s Luck

It is almost certain that when Nesbit wrote The House of Arden she interned to tell a magic story around the two Arden children, Elfrida and Edred. The magic creatures were the Warps; there were three of them; all moles of Sussex origin, though what they spoke was a dialect of their own.

One year after she had introduced Elfrida and Edred she published Harding’s Luck, but this time Dickie, their cousin was the hero. Harding’s Luck, in spite of Dickie and several other good characters, is not considered one of Nesbit’s best books.

But Dickie, both as lame Dickie from Deptford and as Richard Arden in the Past, is one of her best-drawn characters.

The Legacy of E. Nesbit

When an author dies, as E. Nesbit did in 1924, too often their books are forgotten. This did not happen in her case, for the books have gone on, loved by generation after generation of children. Not all her books were great, but enough were for her name to belong forever to children’s literature. (—Noel Streatfeild, London, 1966)

Nesbit was an influence, directly or indirectly on writers who came after her, especially those who placed ordinary children in magical situations. These included P.L. Travers (author of the Mary Poppins series), C.S. Lewis, J.K. Rowling, and Diana Wynne Jones.

In more contemporary fan fiction, Oswald Bastable, grown up from Nesbit’s The Treasure Seekers was the main character in a series of steampunk novels by Michael Moorcock. Four Children and It (2012) by Jacqueline Wilson is a contemporary sequel to the Five Children and It trilogy.

Some, like Gore Vidal, have argued that E. Nesbit wrote about children rather than for children, in a similar sense as Lewis Carroll did. Certainly, her books have an appeal to children of all ages and are ever ripe for rediscovery.

In addition to the novels for children listed below, E. Nesbit produced numerous story collections, novels for adults, nonfiction, and poetry. For a more complete listing of her works, follow this link.

The House of Arden series

Other novels for children