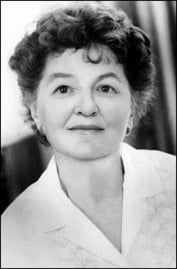 She had a vivid imagination from childhood on, and was inspired by her love of reading, favoring fairy tales and myths.

Mary Poppins, one of the best-loved characters in children’s literature, came from a little story she made up while babysitting two young children. It first became a book, then a series, and the basis of the renowned 1964 Disney musical film, which greatly displeased the author. Travers wrote other children’s books as well as books for adults focused on mythology.

Born Helen Lyndon Goff in Queensland, Australia, her mother was Margaret Agnes Morehead, the sister of the Premier of Queensland. Her father, Travers Goff, was an alcoholic and unsuccessful bank manager who died when she was 7 years old.

Nicknamed as Lyndon during her childhood, she moved with her sisters and mother to New South Wales in Australia after her father’s death. They were financially supported by her great aunt, who later become the inspiration for her book Aunt Sass.

Ever the imaginative child, Travers loved fairy tales and animals, in particular birds; she often referred to herself as a hen. She had a love of Irish mythology, said to have stemmed from the stories her father told her when she was a child. During her teen years, her writing talents took flight, and eventually her poetry was published in Australian periodicals.

In the early 1920s, she was published in the literary magazine The Bulletin. It was during this time she adopted the stage name Pamela and gained a reputation as a dancer and Shakespearean actress, supporting herself as a journalist.

Travers toured Australia and New Zealand with Allan Wilkie‘s Shakespearean Company. In 1924, she left to pursue her literary passions in England, having little support from her family to pursue a career in acting.

Her voyage to England gave her the inspiration for a series of several travel articles that she sold to Australian publications, boosting her finances to continue her pursuit as a writer.

In 1931, she and her friend Madge Burnand (a playwright and former editor of Punch, a satirical British magazine) moved from their shared flat in London to a cottage in Sussex. This is where she began to writing Mary Poppins. 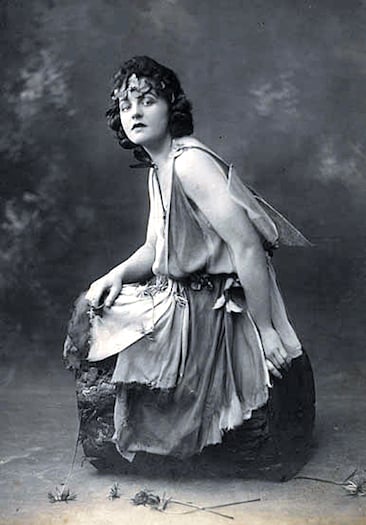 England embraced Travers, and she began publishing articles in various papers, including poems in The Irish Statesman. The editor George William Russell, pseudonymously known as AE, took a keen interest in Travers’ writing and a friendship quickly developed.

Through her connection to Russell, she became friends with poet William Butler Yeats and studied mythology with G.I. Gurdjieff. 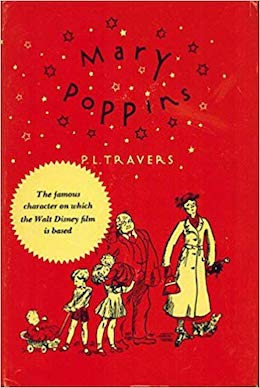 Mary Poppins was published in 1934 to instant success. The book kicked off a successful series with the magical nanny as the central character. In the first book, she’s blown to Number 17 Cherry Tree Lane, London by the East wind, and becomes part of the Banks family’s household to take care of the children.

If your idea of Mary Poppins comes from Julie Andrews’ portrayal of her in the 1964 film, you’ll be in for a surprise if you  read the books. She a much darker and more prickly character. Here’s how she’s described in a Classic of the Month column in the Guardian:

“Mary Poppins is not nice. She arrives, to be the nanny for the four Banks children, riding a puff of wind; she understands, and can be understood by, animals; she can take you round the world in about two minutes; and the medicine she gives you will taste like whatever your heart desires (lime-juice cordial for Jane Banks; milk for the infant Banks twins) — but a spoonful of sugar, to quote the very sugary movie, is nowhere in sight.

Mary Poppins may grant your fondest wishes, but her manner is entirely medicinal …

All disapproving incomprehension, she refuses to acknowledge the magic for which she seems to be responsible — leaving the possibility wide open that the collection of more or less unconnected adventures the children have with this otherwise prosaic working-class nanny, who likes nothing better than to gaze at her reflection and admire her new gloves or hat, are nothing more than the wish fulfillment fantasies of overactive juvenile imaginations.” 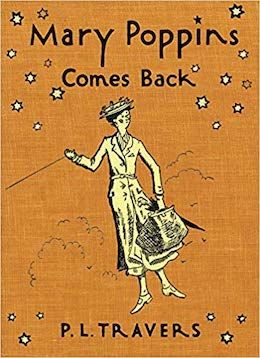 The next book in the series, Mary Poppins Comes Back, came out the following year (1935), but then there would be an 8-year gap before the next, Mary Poppins Opens the Door (1943). This was followed by Mary Poppins in the Park (1952). These formed the main storyline as a series.

Fearing she wouldn’t be taken seriously as an author, despite the success of her Mary Poppins books, she wrote young adult novels, a play, as well as essays and lectures on mythology. In 1966, already after the highly successful Disney film was produced, she remained busy, serving as a writer-in-residence at Radcliffe College and Smith College. 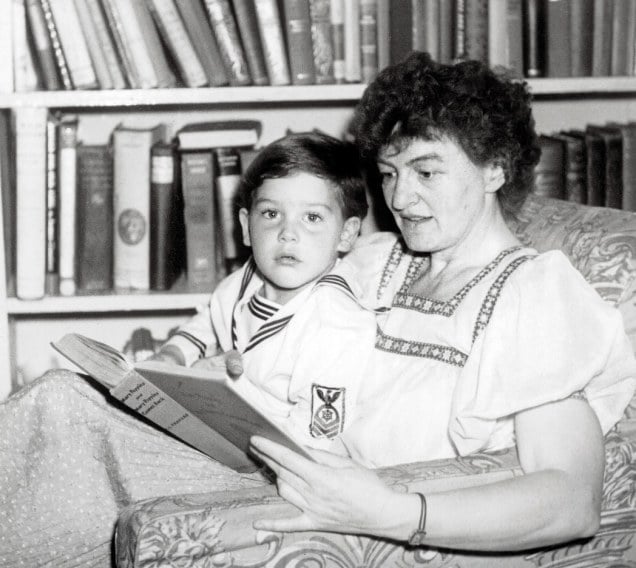 In 1964, Mary Poppins was produced into a Disney film. In 2013, the film Saving Mr. Banks starring Emma Thompson and Tom Hanks was created to tell the story of the making of Mary Poppins and the fraught relationship between Travers and Walt Disney. Here’s an excerpt from a Smithsonian Magazine article on how this “based on a true story” might have been slightly sugar-coated:

“The new movie proclaims it is ‘based on a true story,’ a cheery phrase that cleverly balances truth-telling and let’s-pretend. Saving Mr. Banks is not a documentary, but a highly entertaining feature film loosely based on the deeply antagonistic collaboration between two very strong-willed artists.”

Travers was skeptical when she was first approached by Disney in 1945. She resisted for many years, demanding the film be live action and not animated. In 1959, she finally agreed to sell the rights to Mary Poppins. But even after serving as a consultant during the production period, she was quite dissatisfied with the final film.

Still, Saving Mr. Banks is an entertaining film, though it’s been said that in real life, Travers was even more of a pill than the portrayal by Emma Thompson.

Idle time is food for the devil

Never one to rest on her laurels, she stayed busy until the end of her life. She had plans to write Goodbye, Mary Poppins, but withdrew the proposal after an outcry from both her children audience and publishers. In 1977, Travers was made an Officer of the Order of the British Empire.

Travers never married, but adopted a son, Camillus, in 1939. He was one of a set of twin Irish boys and led to another complicated situation in an already tangled life. PL. Travers died in London at age 96 in 1996, due to complications from an epileptic seizure.