The Five Children and It Trilogy by E. Nesbit 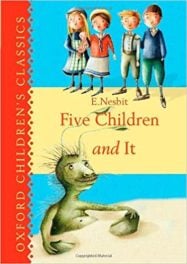 Five Children and It was the first of a trilogy by E. Nesbit (1858 – 1924), followed by The Phoenix and the Carpet and The Story of the Amulet.

In these books, readers meet Robert, Anthea, Jane, Cyril, and the baby called The Lamb.

The following description of Five Children and It is by Mary Noel Streatfeild, adapted from an introduction she wrote for Nesbit’s autobiography Long Ago When I was Young (Franklin Watts, 1966). Streatfeild herself the author of a classic children’s book series known as the “shoes” books, which began in 1936 with Ballet Shoes.

It was not the children who fascinated readers, and Nesbit had no intention that they should, for all her life she love magic. So it was a first the Psammead and then the Phoenix that she placed in the foreground.

This was deliberately and carefully done so that she, who created in the Bastables one of the most vivid families in all of children’s literature, could be sure the children in this trilogy were so faintly drawn that none of us would recognize them if we met them in the street. Whereas nobody could, in contrast, miss either the Psammead or the Phoenix.

The Psammead, when it was first seen in Five Children and It, was coming out of the sand yawning and rubbing its eyes. It was a strange creature:

“Its eyes were on long horns like a snail’s eyes, and it could move them in and out like telescopes; it had ears like a bat’s ears, and its tubby body was shaped like a spider’s and covered with thick short fur, and it had hands and feet like a monkey’s.”

But it was not the Psammead’s appearance that made it immediately popular with everybody who read the book; it was its personality. It was the most contrary beast.

“It isn’t talking I mind — as long as you’re reasonably civil. But I’m not going to make polite conversation for you. If you talk nicely to me, perhaps I’ll answer you and perhaps I won’t. Now say something.”

Now what child faced with such a command could find anything to say?

Like all her best creations E. Nesbit knew far more about the Psammead that she told her readers. She had knowledge of its life over thousands of years. As well, she knew how it would make out in its future and in the past.

The Psammead was so sly about its ability to grant wishes, yet it was dignified at the same time. It had to grant wishes, like it or not, but it never admitted to it, always it hinted that it could refuse a wish if it wanted to.

“You want another wish I expect. But I can’t keep on slaving from morning to night giving people their wishes. I must have some time to myself.”

All who read Five Children and It waited eagerly or the next book about the Psammead, but they had to wait, which must have been a disappointment. For E. Nesbit had promised that it would come back. The promise had been given at the end of Five Children and It.

The Psammead, on its way into the Past, heard one of the girls say: “I hope we shall see you again some day.” Its weak but still dry and husky voice asked: “Is that a wish?” “Yes, please,” said the girls. Then the Psammead, as it did when it was wish-granting, blew itself up before disappearing in the sand. 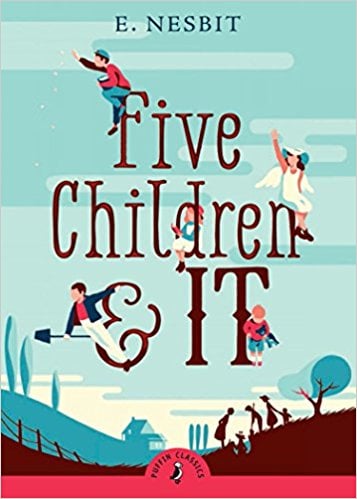 The Phoenix and the Carpet

Although E. Nesbit did not give her readers the Psammead in her next book, two years later she published The Phoenix and the Carpet about the same family of children. What a bird was the Phoenix! Its golden egg arrived rolled up in a magic carpet.

The children put the egg on the nursery chimney-piece and it would never have hatched out if they had not tired to build a magic fire. The bird, exquisitely beautiful, rose from the flames saying, as it perched on the fender:

“Be careful; I am not nearly cool yet.” Later, when in singed the tablecloth, it said, “It will come out in the wash.” A startling memory feat for a bird who had been hatched out two thousand years before.

The Psammead had been well educated, but the Phoenix was only superficially brilliant. It covered what it did not know with what it had picked up two thousand years before.

It was conceited beyond bearing, but so beautiful it was hard not to forgive it. Besides, it knew some delightful things. “These wishing creatures know all about each other — they’re so clannish; like the Scots you know — all related.”

The Phoenix could not, of course, grant wishes but it didn’t have to for there was the magic carpet. It was at its best when all the children plus the cook traveled on this magic carpet to “a sunny southern shore.”

The Phoenix, like the Psammead, though vastly popular with E. Nesbit’s readers was allowed to vanish, but alas, it vanished for good. It left presents and one golden feather behind it. It departed forever as it had arrived — in the heart of a magic fire. 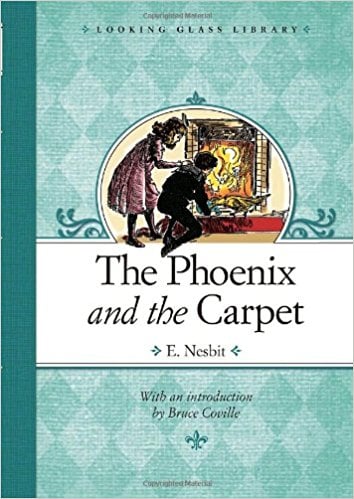 The return of the Psammead

Then two years later the Psammead was back. It came in The Story of the Amulet. Nothing shows more clearly how hard E. Nesbit tried not to allow the creatures of her imagination rule her stories the way she allowed the Psammead to return. She had promised her readers that he would, and she kept that promise, but only insofar as he fit in with her new interests.

The poor creature reappeared in a most humiliating way. The children found it for sale in a pet shop, where it was called a ‘mangy old monkey.’ It could not be said to be humbled by its circumstances, nothing could get it to do that, but it almost pleaded with the children to get it away.

… From the beginning, even though it could no longer grant the children’s wishes, the Psammead stole the story. It utterly refused to be kept in its place.

“You’ve saved my life and I am not ungrateful — but it doesn’t change your nature or mine. You’re still very ignorant, and rather silly, and I am worth a thousand of you any day of the week.”

If E. Nesbit’s readers hoped that because the Psammead was back he was going to remain with them, they were disappointed. By the end of The Story of the Amulet, she had finished with amulets and  Psammeads … The Psammead vanished, to live as far as is know forever, by the great temple of Baalbec. (—Mary Noel Streatfeild) 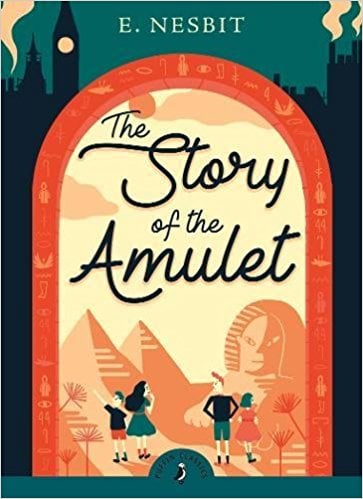 The Story of the Amulet on Amazon

More about The Five Children and It trilogy by E. Nesbit

*This post contains affiliate links. If the product is purchased by linking through, Literary Ladies Guide receives a modest commission, which helps maintain our site and helps it to continue growing