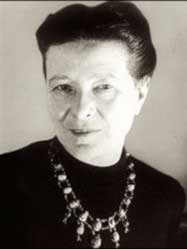 Born in Paris, de Beauvoir was deeply religious in her youth. She intended to become a nun until a crisis of faith at age fourteen resulted in her becoming an atheist. This remained central to her philosophy for the rest of her life.

Summing up the totality of a brilliant, complex woman, the biography Simone de Beauvoir: A Life, a Love Story (by Claude Francis and Fernande Contier, 1987) states:

“Her ideas, although extremely controversial, were expressed with a power and a passion that inspired a generation of women to explore their own lives and to question the values they had been taught.

For de Beauvoir herself, the presentation of her philosophy was not enough. She had long before determined to ‘create’ herself according to her own beliefs, and maintained her independence until her death …

The body of her work included novels, a play and nonfiction. Her memoirs, written in four volumes, present her own viewpoint of her struggles and achievements, but leave many questions unanswered.”

Simone and her sister Helene were the daughters of Georges Bertrand de Beauvoir, a legal secretary, and Francoise de Beauvoir, a wealthy banker’s daughter. Though the family lost their fortune in the post-World War I years, the sisters were sent to a prestigious convent school.

After passing baccalaureate exams in mathematics and philosophy in 1925, Simone studied at the Institut Catholique de Paris and the Institut Sainte-Marie. She continued on to study at the Sorbonne, and completed her degree in 1928. Quite the scholar, at 21 years of age de Beauvoir became the youngest teacher of philosophy in France.

After receiving a dual Bachelor’s degree in mathematics and philosophy in 1925 from the Institut Catholique, she continued her studies at the Sorbonne. There, de Beauvoir studied philosophy, as well as passing exams for certificates in Greek, logic, ethics, sociology, and psychology.

De Beauvoir loved English literature. Some of her favorites were Alice in Wonderland, Peter Pan, and the works of George Eliot. She greatly admired Elizabeth Barrett Browning. And she read Virginia Woolf extensively, though with mixed views of her work. Quoting from a 1965 Paris Reviews interview:

“She’s too concerned with whether she’ll be published, with what people will say about her. I liked very much A Room of One’s Own in which she talks about the situation of women. It’s a short essay, but it hits the nail on the head. She explains very well why women can’t write. Virginia Woolf is one of the women writers who have interested me most.

Have you seen any photos of her? An extraordinarily lonely face . . . In a way, she interests me more than Colette. Colette is, after all, very involved in her little love affairs, in household matters, laundry, pets. Virginia Woolf is much broader.” 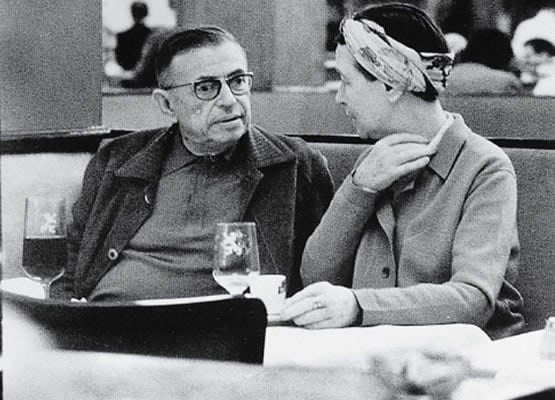 The existentialist circle and Jean-Paul Sartre

Desperate to be accepted into Jean-Paul Sartre’s intellectual circle, it didn’t take her long to succeed. In addition to Sartre, other existentialists including Albert Camus and Maurice Merleau-Ponty were part of this world.

Impressed by her intellect, Sartre asked to be introduced to her. Soon, an open that is, non-monogamous) relationship between the two ensued. While they never married, the couple remained together for over 50 years, connected by their intense intellectual and romantic bond. “We have pioneered our own relationship — its freedom, intimacy, and frankness,” as de Beauvoir described it.

As a New Yorker article described their relationship: “They were famous as a couple with independent lives, who met in cafés, where they wrote their books and saw their friends at separate tables, and were free to enjoy other relationships, but who maintained a kind of soul marriage.”

She had many relationships with both men and women. One of her most famous lovers was American author, Nelson Algren, whom she met in Chicago in 1947. He was the inspiration for a character in her novel The Mandarins. 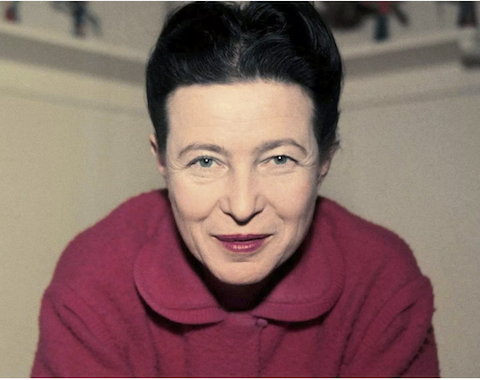 De Beauvoir taught philosophy and literature throughout the 1930s. Meanwhile, Sartre, was drafted into the French army at the start of the war, and was captured in 1940. He released the following year.

In 1944 she wrote her first philosophical essay, Pyrrhus et Cinéas, a discussion of an existentialist ethics. She continued her exploration of existentialism through her second essay The Ethics of Ambiguity (1947).

A first novel and a dismissal from teaching

From 1941 to 1943 de Beauvoir worked on her first novel, The Blood of Others, considered one of the most important existential works of the French Resistance.

In 1943, de Beauvoir was dismissed from her teaching post, as some parents felt she was corrupting her students. She actually did hav an affair with a 16-year-old female student. She decided to pursue her passion, which was to write full time, and never returned to teaching.

The Second Sex and legacy

Simone de Beauvoir’s most popular and enduring work is The Second Sex, published in 1949 and still widely read and studied as an essential manifesto on women’s oppression and liberation.

Filled with ideas deemed radical at the time, the book made her an intellectual force and inspired a generation of women to question the status quo, and better yet, to change it. Published in the U.S. in 1953, this first translation was often criticized as subpar. A 2009 translation is considered superior, if not perfect.

Her body of work encompasses fiction, nonfiction, essay, and memoir. Her novel,The Mandarins, received the prestigious Prix Goncourt award in 1954. Simone de Beauvoir died in Paris of a pulmonary edema in 1986. She shares a grave with Sartre in the Montparnasse Cemetery. 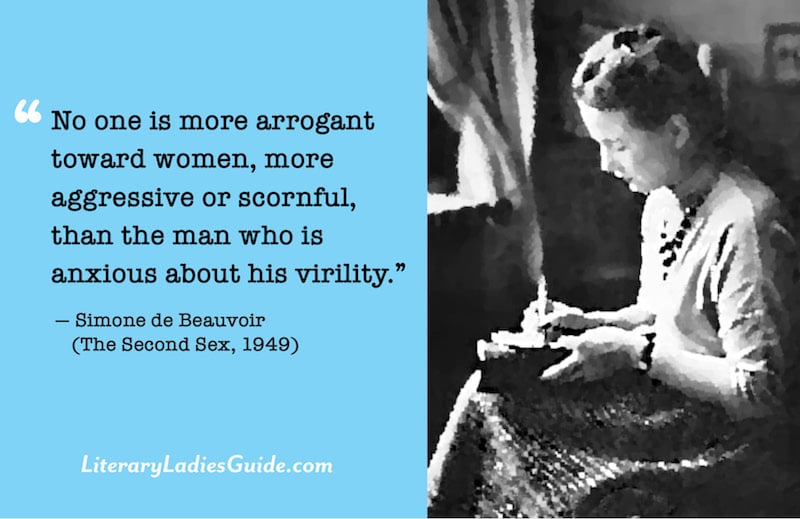 Simone de Beauvoir was incredibly prolific. This is just a small sampling of her works, both fiction and nonfiction.