The Mandarins by Simone de Beauvoir 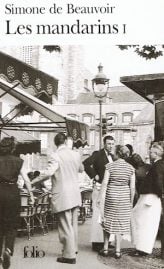 The Mandarins by Simone de Beauvoir is a semi-autobiographical novel published in her native French in 1954, and in English translation in 1956. The same year it was published in France, it won the prestigious literary prize, the Prix Goncourt.

When The Mandarins was published outside of France, de Beauvoir was best known (as she is still today, perhaps) for her 1949 nonfiction book, The Second Sex, a feminist classic.

The Mandarins encompasses many of de Beauvoir’s favored themes, including existentialism, feminism, political structures (including communism), and morality.

The novel portrays a group of a close-knit group of friends who call themselves “the Mandarins” — referring to the scholar-bureaucrats of imperial China. The core group of characters identify as intellectuals, and grapple with what kind of role they might play in post World-War II Europe.

One of the couples portrayed in the book, Anne and Robert Dubreuilh, are supposedly based on de Beauvoir herself and her longtime partner, Jean-Paul Sartre. The fictional couple is married, whereas their real-life counterparts had a long-term open relationship. Not surprisingly, the novel explores the shifting love affairs of its main characters.

The Mandarins received much critical acclaim from major publications like the New York Times (“Much more than a roman a clef … a moving and engrossing novel …”) as well as minor ones like the one following, published upon the book’s American debut:

A 1956 review of The Mandarins

From the review by Melva Chernoff of The Mandarins by Simone de Beauvoir in the Argus-Leader, Sioux Falls, SD, July 1, 1956:

It was with her monumental The Second Sex that Simone de Beauvoir achieved the recognition in the U.S. she had already received in Europe. Here, as there, it was hailed as a classic study of what it means to be a woman. With the U.S. publication of She Came to Stay in 1954, de Beauvoir enlarged her reputation as a novelist of the first rank, capturing the praise and acclaim of critics throughout America.

It begins in Paris, Christmas Eve, 1944. In an apartment on the Left Bank are gathered a group of friends who are free again, as Paris is free after World War II, to celebrate, sing, and talk — and to dream and plan a future which will bring them happiness and which will create a fuller, finer world.

Unwilling to leave the fate of France in the hands of politicians and struggling against the lure of communism, these characters bring a new interpretation of post-liberation France to the American who is only casually aware of the political scene. 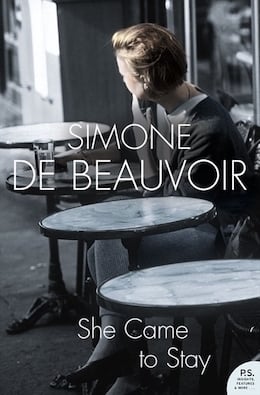 This is an exciting novel, with characters as exciting as they come alive in all their strengths and weaknesses: Henri Perron, successful novelist and journalist, hero of the Resistance, and owner and editor of L’Espoir, and independent newspaper he has founded.

Then there is the beautiful Paula, for whom loving Henri is life enough. Finally, there is Robert Dubreuilh, a philosopher and writer, and his psychoanalyst wife, Anne, their daughter Nadine, and those who touch and change their lives.

Remember the story of the blind men who were asked to describe an elephant? As one felt the trunk he termed the elephant a snake. Another man reached around one leg of the beast and said, “Surely, this is a great tree.” The third blind man was sure he was facing a wall as his hands felt along the elephant’s side. So The Mandarins will be many different books to different people coming to it with their personal perspectives.

This is a love story. This is many love stories. Here are tired, waning passions and selfish, youthful love. Anne discovers that middle age is no barrier to a dramatic and moving love affair. This passion alone, described with great frankness and understanding, would make a novel in itself. Of love and what passes in its name, The Mandarins has plenty. 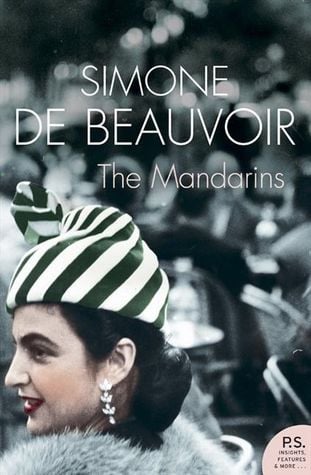 A case for compromise

This is also a novel of philosophical conflicts. Mlle. de Beauvoir makes a strong argument for the necessity of compromise. American readers may not fully appreciate the compromises that are made, but they seem inevitable from the viewpoint of the French “mandarins.”

These intellectuals find communism the only solution to their political situation. They must, as the Existentialists say, “engage” themselves with responsibility and action. The idea of turning to America is presented as a possibility by only the weak and questionable characters.

France cannot stand alone. Therefore she must turn to communism as a lesser evil, according to some of the characters in the story. In that manner we have in The Mandarins a novel of political interest as well.

A word about the characters: They are real, vivid, and human. You will find in them parts of yourself. And you may find yourself coming back to this powerful novel, in thought and in re-reading — whether you read it as a love story, a political novel, or an intellectual experience. 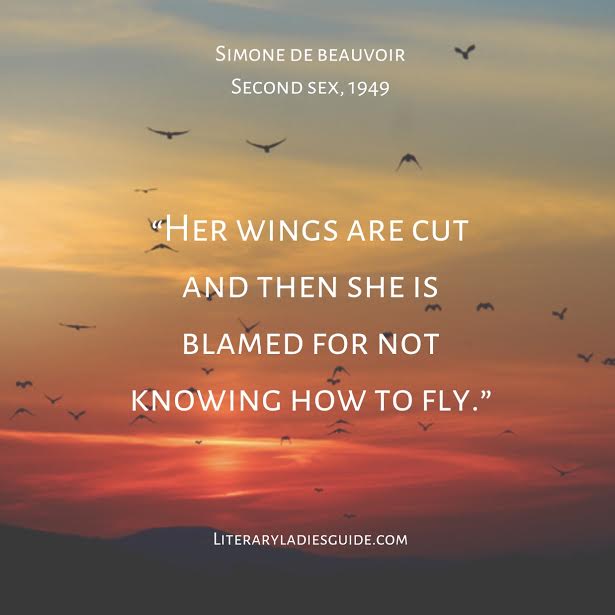 Quotes from The Mandarins

“I could see no reason for being sad. It´s just that it makes me unhappy not to feel happy.”

“All the opportunities you let slip by! The idea, the inspiration just doesn´t come fast enough. Instead of being open, you´re closed up tight. That´s the worst sin of all — the sin of omission.”

“She was ready to deny the existence of space and time rather than admit that love might not be eternal.”

“Surviving one’s own life, living on the other side of it like a spectator, is quite comfortable after all. You no longer expect anything, no longer fear anything, and every hour is like a memory.”

More about The Mandarins

*This post contains Bookshop Affiliate and Amazon Affiliate links. If a product is purchased by linking through, Literary Ladies Guide receives a modest commission, which helps maintain our site and helps it to continue growing