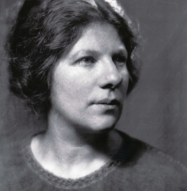 Anzia Yezierska (October 29, 1880 – November 21, 1970) was a Polish-born Jewish-American writer who achieved renown for her fiction on the immigrant experience in the early twentieth century.

Her most notable novel has remained  Bread Givers (1925). She also achieved renown with her first short story collection, Hungry Hearts (1920), and her 1923 novel, Salome of the Tenements (1923).

When her family immigrated to the U.S. in 1893, they were among the masses of Eastern European Jews who arrived between 1880 to 1924. Like many Jewish immigrants, they settled and lived in the immigrant neighborhood of the East side of Manhattan.

Anzia Yezierska was born in Maly Plock, Poland. Her parents, Bernard and Pearl Yezierska,  immigrated to America in 1893, six years after her eldest brothers had arrived and settled. They settled in the lower side of Manhattan, where most Jewish immigrants took refuge.

After arriving in the US, her family adopted Mayer as their new surname. Anzia changed her first name to Harriet (sometimes Hattie). In her late twenties, she changed it back to her original full name, Anzia Yezierska. Her father engaged in full-time study of the sacred text of the Torah and wasn’t gainfully employed.

Eastern European culture, especially the Orthodox one to which her family belonged, didn’t support girls’ education. She and her sisters bore the brunt of this disadvantage. The boys of the family were all educated, and as adults worked in steady, reputable professions. Four of her brothers were pharmacists, another was a math teacher, and the other became an army colonel.

Anzia clashed with her parents, especially her father, whose observance of the religion and Old World culture was a barrier to her full entry into American life. In search of independence and education, the young Yezierska left her home and went to Clara De Hirsch Home for Working Girls.

Anzia pursued her ambition of becoming educated wholeheartedly and with great determination. She promised the German patron in charge of the school that she would become a domestic science teacher to help improve the lives of her people.

The German patron awarded Anzia a four-year scholarship to Columbia’s Teachers College, studying domestic arts. From 1901 to 1905, Yezierska did menial work to support herself while studying in the college.

Her first job was as an elementary school teacher; she taught from 1908 to 1913. In 1913, she took a brief leave from her teaching job to attend the American Academy of Dramatic Arts, where she started pursuing the writing of fiction in earnest.

Longing to rise above her circumstances, she was somewhat hampered by her brittle personality and a measure of self-loathing. In her final book, the autobiographical Red Ribbon on a White Horse (1950), she wrote: “With a sudden sense of clarity, I realized the battle I thought I was waging against the world had been against myself, against the Jew in me.”

In 1910, Anzia fell into a romantic relationship with Arnold Levitas, to whom she became engaged to marry. Instead, she married his friend Jacob Gordon, and due to guilt, this marriage was annulled. Anzia at once went back to Levitas, who she married in a religious ceremony. Her only daughter, Louise, was born in 1912.

In 1914, Anzia left her husband, taking her daughter to live in San Francisco where she took a job as a social worker. She had many responsibilities in that line of work, which made it challenging to take care of her daughter. She gave up custody of Louise to Levitas.

Yezierska and Levitas divorced in 1916, and the following year, having moved back to New York City, she fell in love with John Dewey, a philosopher and a professor at Colombia University. Dewey was one of the most prominent American scholars and social reform thinkers of the twentieth century. The love affair was in truth an affair, as Dewey was married, with a number of children. When Dewey was widowed in the mid-1920s, both he and Anzia had long moved on. 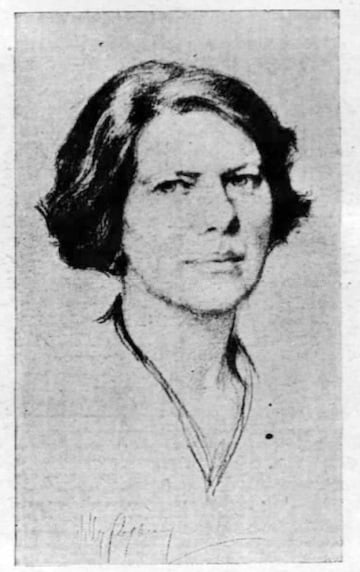 Yezierska’s works were inspired by the struggles she and her family faced as new immigrants in the U.S. Her writing was mainly concerned with Jewish immigrants, and later, she also depicted the lives of newly arrived Puerto Ricans. She focused on the struggles of immigrants to fit into the American way of life as the central theme of her fiction.

Her fiction gave insight into the lives of Jewish immigrants, especially girls, who were more negatively impacted by their Eastern European roots. Though most of her work was fiction, there were many elements of autobiography. Her feminist leanings show through in her female characters’ striving for liberation from cultural constraints and independence.

Anzia started her writing in earnest in 1912, but like many women writers of her time, she faced many setbacks. The difficulties she faced in her personal life were reflected in her fiction on the problems of young married women. She couldn’t find a publisher for her work until December 1915, when The Forum published her story, “The Free Vacation House.”

Her writing career was boosted when her story “Where Lovers Dream” was published in The Metropolitan. One of her most inspiring stories, “The Fat Of The Land,” was featured in Edward J. O’ Brien’s collection, The Best Short stories of 1919.

The popularity of her short fiction caught the attention of publishers. In 1920, Houghton Mifflin compiled Anzia’s short stories into a collection titled Hungry Hearts. Some sections of this book were adapted into a successful 1922 silent film. Another collection of short works published two years later, was Children of Loneliness (1922) continued to explore themes of offspring of immigrants who came to the U.S. in pursuit of the American dream.

The characters’ speech patterns and even some of the prose retain a subtle Yiddish “accent.” Sara Smolinsky wants, like her real-life alter ego Anzia, “to become a person.” 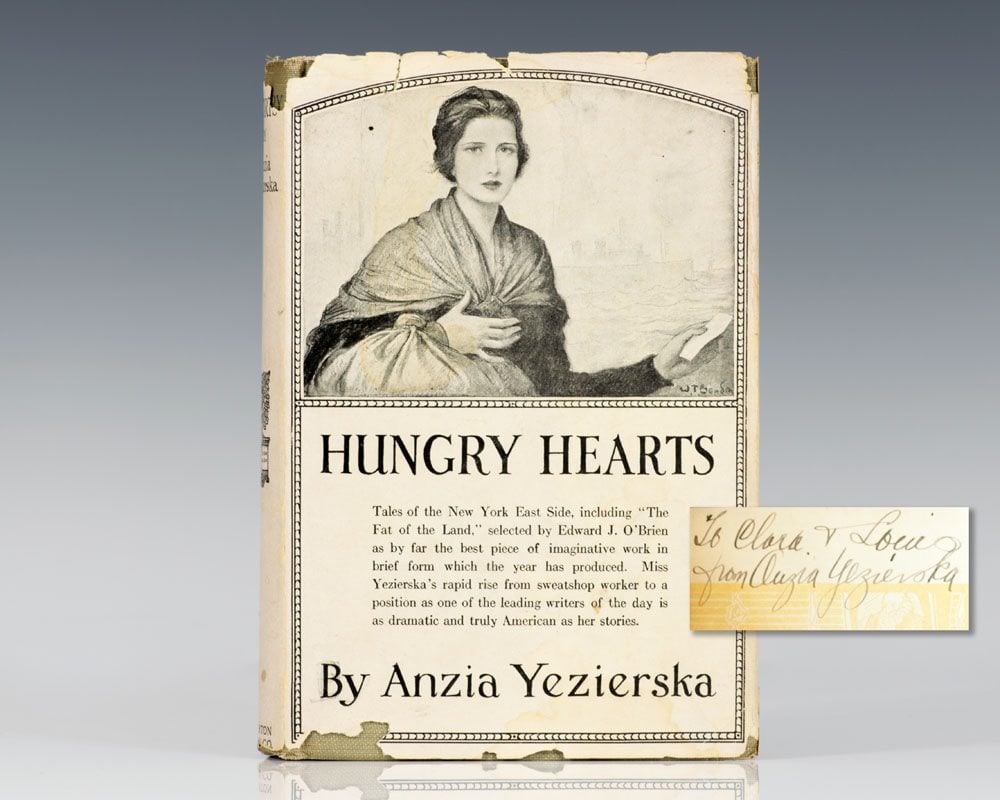 Anzia did a brief stint in Hollywood, where she prepared for the release of the silent film Hungry Hearts in 1922, based on her short story collection. Samuel Goldwyn gave her a lucrative contract to write screenplays, building off the popularity of Yezierska’s stories.

In 1925, her first novel, Salome of the Tenements, also became a silent film. She came to be known as “the Sweatshop Cinderella.” Resenting this rags-to-riches stereotype, and frustrated with the shallow ways of Hollywood, Anzia returned to New York. 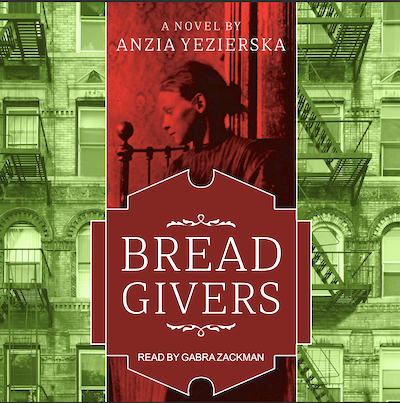 Anzia Yezierska’s best-known work remains the semi-autobiographical novel, Bread Givers (1925). It was brought back into print after fading away for some decades.

This semi-autobiographical novel delves into the well-trodden theme of an immigrant family whose children strain against the ways of their Old World parents. The father, Reb. Smolinsky might be learned in the holy Torah, but he’s childish, impractical, and inflexible when it comes to his daughters.

The three daughters chafe under their father’s domination. The youngest and feistiest is Sara, oddly nicknamed Blut und Eisen (“Blood and Iron”) from the time she was tiny. She rebels from the start, fighting for her autonomy, seeking self-determination. Sara’s process of breaking away from her father’s domination is painful. Some of her strivings are awkward and uncomfortable, but she emerges as a person (mostly) in command of her world.

Though Bread Givers reflects Anzia’s lived experience, and though she had already written and published short story collections and Salome of the Tenements, it was a struggle for her to set it down on paper — perhaps because it hit so close to home. She observed in a 1925 essay:

“This conviction that the poorest life is rich enough for the greatest story, that the real struggle of the washerwoman, the shopgirl, the fishwife, no matter how sordid, how ugly, throbs with dramatic beauty goaded me to write. So without any plot or plan, without knowing how, I started to set down the life I had lived.” 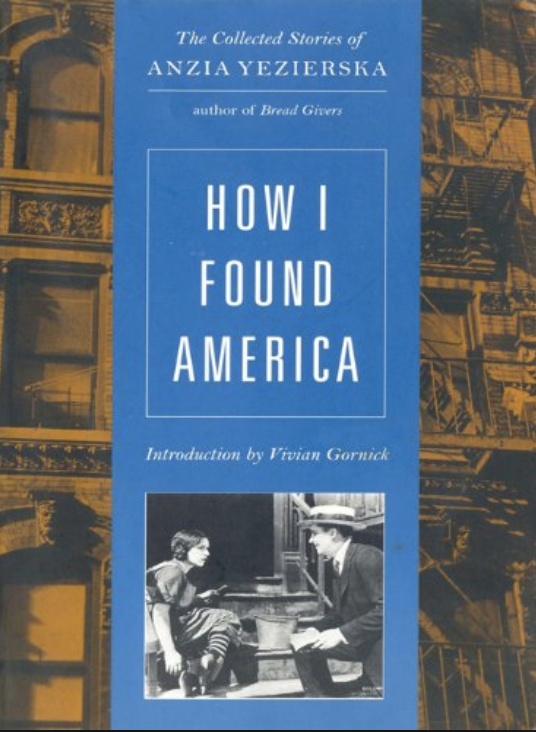 Anzia Yezierska continued to write for the rest of her life, even when, toward the end, she was almost blind. Long before her death, she all but disappeared from the literary world. She died on November 21, 1970, of a stroke in a nursing home in California.

The mid-1970s brought a wave of reconsiderations of her stories and novels. Bread Givers was reissued in 1975 and 2003, and some of her stories were anthologized, introducing them to new audiences. Since the 1980s, her work has been the subject of renewed academic interest, as one can see in this selection of critical studies.

Anzia Yezierska worked valiantly to achieve her ambition of being a published and respected writer, of “becoming a person,” as her most famous character, Sara Smolinsky, put it. In a 1921 interview she said:

No Don Quixote ever went fighting windmills more wholly unprepared than I as a writer. I began my schooling in a sweatshop. During the slack season, I did housework and cooking. In time I became proficient enough in cooking to get a free scholarship in a domestic science school.
Before the term was half over I went to the department and said, “I had enough of cooking—I want to learn to write.”
“A writer?” the woman stared at me. “My dear child, you may as well want to be a dean of the university. There are native-born writers who do not earn their salt. What chance is there for you with your immigrant English?”
“If I can’t get a chance to learn the American English I’ll write in immigrant English,” I answered, “but write I must.”
And without guide or compass, I plunged into the sea of the short story.