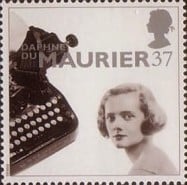 Daphne du Maurier was born in London in May 1907 and was still writing at her death in 1989. Educated by private tutors in Paris, she published her first short stories at the age of twenty-one. Daphne du Maurier’s writing habits surely contributed to her prolific career as an author of fiction and drama.

Her publisher encouraged her to write a novel, which became The Loving Spirit in 1931. She was made a fellow of the Royal Society of Literature in 1952 and became a Dame of the British Empire in 1969.

In 1977 she won the Mystery Writers of America Grand Master Award. As well as Jamaica Inn, Hitchcock directed film versions of The Birds and Rebecca. Film versions were also made of many of her other books, including Frenchman’s Creek, Hungry Hill, and My Cousin Rachel, which starred Richard Burton and Olivia de Havilland.

Daphne’s initial ideas were jotted down in pencil in small blue exercise books before being extensively re-drafted at one of her many typewriters. Her family decided to place the archive at The University of Exeter in 2001, where the ‘Rebecca Notebook’  was re-discovered.

Facing a plagiarism challenge from writer Edwina MacDonald, who claimed the Hitchcock film of Rebecca relied heavily on her own work, Blind Windows, Daphne Du Maurier successfully defended her work by producing the notebook as evidence. 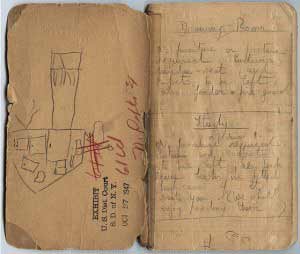 Interestingly, her notes entitled ‘The rough start of Rebecca’ have a different opening line ‘I do not think we will ever live in England again – that much is certain,’ instead of the now famous line ‘Last night I dreamt I went to Manderley again …’. The typed copy of the Rebecca manuscript also reveals her approach to re-drafting, with many spelling mistakes and Du Maurier’s own numerous corrections.

In an interview Daphne du Maurier once mentioned that her favourite writing place was a gardener’s hut, where, she said, ‘I’d sit for hours on end, chain-smoking, chewing mints and tapping away at my typewriter.’ She also describes writing Rebecca ‘sitting on the window seat of the living room, typewriter propped up on the table before me.’

Like many writers, she needed a set routine before she could enjoy the peace of mind she needed to write. Servants helped to take care of the ‘disorder’ of family life, although in the war years she had to do much more herself and said, of her daughter.

‘I chuck her a doll to play with and rush to the privacy of a room alone and hammer upon my typewriter at Frenchman’s Creek, my new book, and I am lucky if I get a page written.’ 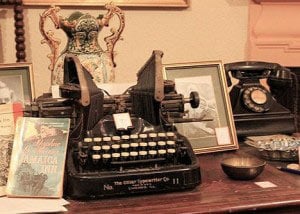 Much of her early work seems to have been typed on an American Oliver Model 11, manufactured in Chicago, Illinois. The Oliver was notable as the first effective ‘visible print’ typewriter, with text clearly visible to the typist as it was entered. Her Oliver 11 is displayed in the museum at the Jamaica Inn – and in 1996 starred with her on a British postage stamp.

Her later work was done on her Underwood Standard Portable Typewriter, which was later replaced by a top of the range Olivetti. Fox’s Glacier Mints were her favourite ‘writing sweets’, usually kept in a small dish next to her typewriter. 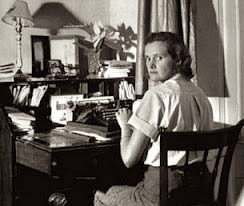 Daphne du Maurier once famously said, ‘I can’t say I really like people, perhaps that’s why I always preferred to create my own.’  Over the course of twenty-nine novels and dozens of short stories she was more interested in the balance of power between men and women, particularly in marriage, rather than romantic love stories.

Never fixed in one genre or writing style, her work ranged from Rebecca (which has been called the first major Gothic romance of the 20th century), to biographies, historical fiction and horror stories, plays, short stories, science fiction, family histories and a mystery.

Having been described as ‘the favourite novelist of put-upon wives around the world’ the re-discovery of a her short story ‘The Doll’  shows how diverse her legacy is, as it tells the story of a young man who discovers the girl he loves (called Rebecca) won’t accept his advances because she has a life-size mechanical male doll.

It was written in the 1920’s and published in 1937 in a compilation of rejected stories called The Editor Regrets. The Doll was re-published by Virago in 2011. I think Daphne would have been very pleased.

Reprinted by permission from The Writing Desk; contributed by Tony Riches