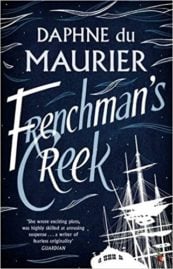 Frenchman’s Creek by Daphne du Maurier (1941) is a historical novel set in Cornwall, England, during the reign of King Charles II. The story centers on a love affair between Dona, Lady St. Columb, and Jean-Benoit Aubéry, a French pirate.

A tale rich in love, adventure, and historic detail, it’s among du Maurier’s most iconic novels. Read a detailed plot summary here. The novel was reissued in a new edition in 2020. From the publisher (Sourcebooks):

“A classic from the master of gothic romance and suspense, Daphne du Maurier, Frenchman’s Creek is an electrifying tale of love and scandal on the high seas.

Jaded by the numbing politeness of London in the late 1600s, Lady Dona St. Columb revolts against high society. She rides into the countryside, guided only by her restlessness and her longing to escape.

But when chance leads her to meet a French pirate, hidden within Cornwall’s shadowy forests, Dona discovers that her passions and thirst for adventure have never been more aroused. Together, they embark upon a quest rife with danger and glory, one which bestows upon Dona the ultimate choice: sacrifice her lover to certain death or risk her own life to save him.

Frenchman’s Creek is a breathtaking historical thriller about a woman embracing danger and romance, haunted by the gothic mood of du Maurier’s Rebecca, Jamaica Inn, and My Cousin Rachel.”

Typical of the tenor of the prose is this quote describing Dona’s passionate awakening:

“For love, as she knew it now, was something without shame and without reserve, the possession of two people who had no barrier between them, and no pride; whatever happened to him would happen to her too, all feeling, all movement, all sensation of body and of mind.”

A 1942 review of Frenchman’s Creek

Only a woman — an extraordinarily articulate woman at that — could have told this tale of the Lady Dona St. Columb, wife of an adoring, stupid Britisher of title, mother of two adorable children, who ran away with a French pirate in a spirit of enchanted midsummer recklessness, and returned to take up again the realities of the life to which she belonged.

Daphne du Maurier, as the readers of Rebecca will remember, has a genius for creating romance against a background of compelling English countryside.

This time she has chosen for her story a a period “in a century now forgotten,” and a place called Navron House, on the wild Cornish coast, in the wood that bordered a mysterious arm of the sea, the “Frenchman’s Creek,” as it became to a later generation.

Here the pirate who robbed stodgy British country families of jewels and plate and bestowed them upon the poor peasants of his native Brittany, was accustomed to moor his ship while making repairs and lying low until the storm of his latest exploit had blown over.

Here the Lady St. Colomb, wearied of the frivolity of the London Court, went vacationing, refusing to let Sir Harry accompany her on her husband’s long-neglected estate, and met and loved “the Frenchman” and ran away with him on one of his expeditions. 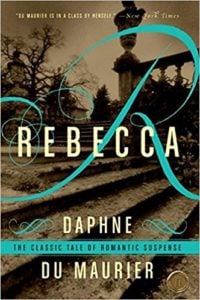 The pirate ship slipped back up the creek and Dona came home. “She turned away from the quay toward the trees and the narrow twisting path that would bring her to Navron …

Soon the mist would clear and the sun would come up over the trees beyond the river, and even now, as she came out of the woods and stood upon the lawn, the morning light laid a finger upon Navron, as it slept, still and shuttered.”

“She crept across the lawn, silver with dew, and tried the door … William (her trusted servant) stared at her as though she were a phantom — than, her heart leaping in sudden understanding, she saw the great-coat on the chair, the riding-whip, the usual disorder of arrival … ‘Sir Harry has come, my lady,’ said William.”

Frenchman’s Creek is a brilliant novel, with Daphne du Maurier and her gifts for heightening beauty, for dramatizing human weakness, at their readable best.  (by Jane Corby, writing for The Brooklyn Daily Eagle, Feb., 1942) 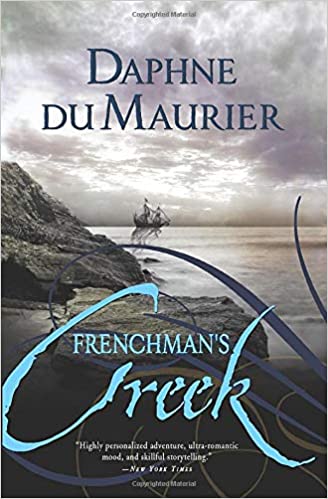 Frenchman’s Creek has been the subject of two adaptations. The first was a fairly faithful 1944 film starring Joan Fontaine, Arturo de Córdova, and Basil Rathbone.

Film and mini-series versions of Frenchman’s Creek on Amazon*