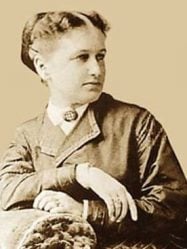 Despite having published seven books in her long lifetime, Candace Wheeler (1827–1923) might not be classified as a “literary lady,” let alone a classic author. She was one of the first American women to practice as an interior and textile designer, and opened the profession to other women who followed in her footsteps.

Born Candace Thurber, her father was a Puritan abolitionist so severe that he would not allow the family to use sugar or cotton, and he applied similarly stringent standards to his children’s reading habits, decreeing that they read nothing more fanciful than the Bible and Pilgrim’s Progress.

Yet, she evolved into a superlative aestheticist and the godmother of many female artists, writers, and designers. Often referred to as “the mother of interior design,” she was the actual mother of the accomplished artist and book illustrator Dora Wheeler Keith.

Moving away from Puritan traditionalism

The tension between the traditionalism of Wheeler’s Puritan upbringing and her inarguably glittering artistic career was not uncommon in the biographies of many of the educated, accomplished, and socially conscious ladies of the 19th century. A contemporary feminist may have difficulty with Wheeler’s continued stress on her obedience to her husband, as she solicited his permission for every step in a career that was extraordinary in its independent feminism.

Her husband, Thomas Wheeler, a self-made financier, is not an unappealing figure, albeit a bit of a cipher in comparison to his vivid wife. Perhaps the most telling anecdote about him is his comment when he bought a townhouse as a home for his wife’s newly formed Associated Artists, an independent corporation of female artists:

“Well, at least that will make it up to her for not having the vote.” Mr. Wheeler did not live long enough to see women’s suffrage passed, but Candace did.

Indeed, the first twenty-five years of Candace Wheeler’s marriage offered little suggestion that she would prove to be anything other than a conventional, if socially and culturally well-connected, wife and mother.

Her early life in New York City reads like a name-check of anyone in the arts, finance, or politics of early 19th-century American society: The Coopers (of Cooperstown, the Cooper Union and Natty Bumppo fame), James Russell Lowell, and Charlotte Cushman, the celebrated Shakespearean, are just a few of those casually mentioned in Wheeler’s social notes.

But what can feel like Knickerbockian name-checking is also a good reminder of how small a world New York, and with it, America, was in the 1840s. Everybody who was anybody really did know everybody. Even when the Wheelers departed for an extended stay in Europe just after the Civil War, the same circle was there to greet them and perform the appropriate introductions. 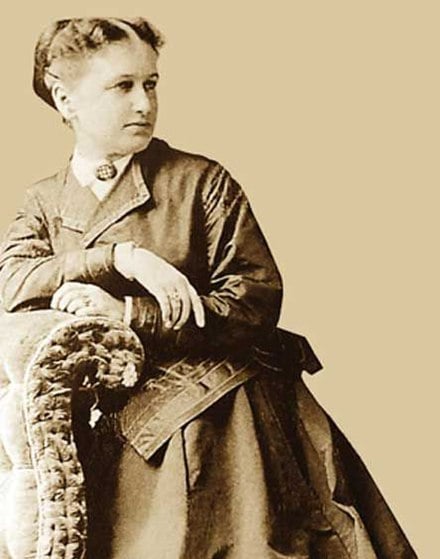 Although Wheeler never states it explicitly, the American Civil War and the numerous genteel widows it left behind, seems to mark the turning point in Wheeler’s life. Inspired by the unfortunately-named English Society for Decayed Gentlewomen, she immediately joined forces with several other charitably-minded society ladies to adopt its purposes to the aftermath of the war in America – though she wisely chose to change the name to the Society of Decorative Arts.

Following the model of the British society, which had been championed by such titans of Arts and Crafts movement as the illustrator Walter Crane, Wheeler’s newly-formed Society provided instruction, easily reproducible patterns, and remunerative outlets for handiwork such as embroidery and china painting, which were the few skills possessed by impoverished widows and spinsters – including the Society’s first paid secretary, Elizabeth Custer, the General’s widow.

Choate persuaded Wheeler to transfer her allegiance to the working women’s organization, a move seen as a betrayal by such Board members of the Society for Decorative Arts as Mrs. J. J. Astor (for surely, neither the skills nor the female artisans of such different classes could be expected to rub elbows comfortably).

The year of Wheeler’s resignation from the Board of the Society of Decorative Arts, 1879, was also the year that marked Wheeler’s transformation from patron of the decorative arts to professional practitioner, when she was invited by Louis Comfort Tiffany to join him as an equal partner in the decorating firm that bore both their names (an agreement that was once again subject to her husband’s approval).

The partnership won such commissions as the curtain for the Madison Square Theatre, the Seventh Regiment Armory, and the Union League Club. Wheeler’s association with Tiffany lasted until 1883 when she formed her own textile firm, Associated Artists, which involved only women – and occasioned her tolerant husband’s philosophical observation on suffrage when he purchased the townhouse on 23rd street to house her fledgling company. 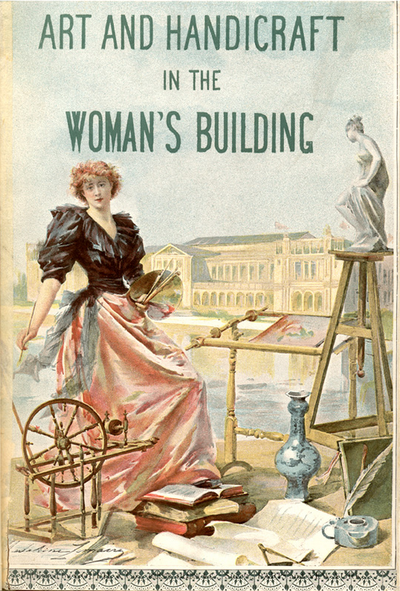 The Women’s Pavilion at the Chicago World’s Fair

Perhaps the culmination of Candace Wheeler’s career was her being invited, at what was then an advanced age of 66, to take charge of interior design the Women’s Pavilion at the 1893 Chicago World’s Fair, as well as organizing the State of New York’s applied arts exhibition there.

The building, designed by architect Sophia Hayden, was filled with exhibitions of women’s fine arts, crafts, industrial products and regional and ethnic specialties from around the world. The Central Hall featured busts of notable women from history – many of them carved by women. 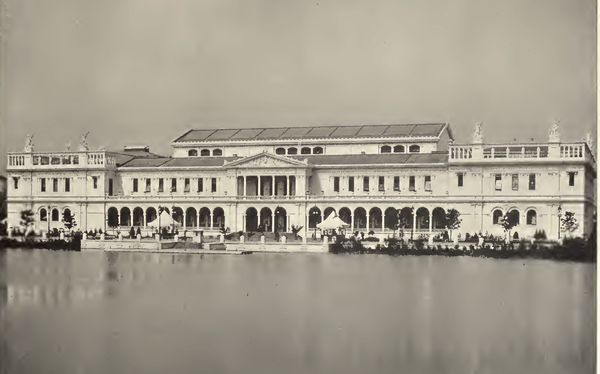 Wheeler’s interior featured murals commemorating the progress of women by such renowned female artists as Mary Cassatt, as well as a ceiling designed Wheeler’s own daughter, the talented artist Dora Wheeler (Keith). Alas, many of these murals have vanished, although some pictures of them remain. 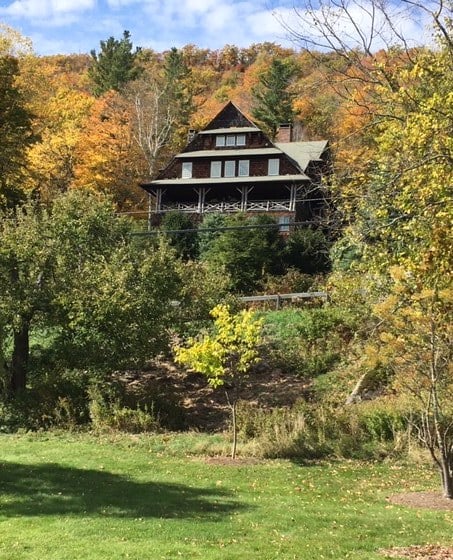 Arguably no less spectacular – and equally quixotic – an endeavor was Wheeler’s Onteora, an arts colony located in the Catskills that hosted such luminaries as Mary Mapes Dodge, Mark Twain, and Maude Adams, the American actress for whom the role of Peter Pan was written by J.M. Barrie.

In her Annals of Onteora, Wheeler describes how she and her brother selected the site based purely on the artistic vista – despite the local farmers’ queries whether they wouldn’t like to look at the water supplies first. It is an amusingly self-deprecating anecdote; however, Wheeler’s description of her relationship with these self-same Onteora locals reminds us of how careful we must be when attempting to judge the attitudes of the past by our own standards.

Her classism is evident, even when she is describing her neighbors with admiration. And her memoir admittedly contains (mercifully very few) outright racist passages that contrast the eagerness to please of recently emancipated Southern black workers against the attitudes of the recalcitrant Northern workers who insist on being paid what they’re worth.

Several of Wheeler’s comments about living in Brooklyn also contain off-handed descriptions of the “Irish type” or the “German type” that were polluting the classical “American profile” – as if such a thing could logically exist.

On the other hand, within their narrow social circle, Wheeler’s views could be unexpectedly tolerant. Charlotte Cushman, “America’s greatest living tragic actress,” was renowned for her breeches roles and for having served as the model for the female sculptor Emma Stebbins’ The Angel of the Waters atop the Bethesda Fountain in Central Park. She also had openly tempestuous relationships with a series of other female artists (at least one of which led to a court case), but was still casually accepted as a member of the Hunt Club – as well as received at the White House by Abraham Lincoln. 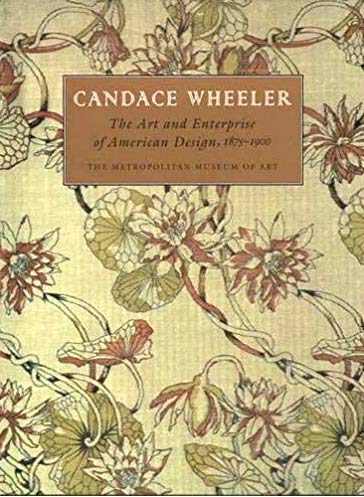 A balance between conventionality and rebellion

Candace Wheeler’s career and feminism strike a similar balance between the conventions enforced by her upbringing and her social station and a strong woman forging a rebellious path in a world whose restrictiveness modern American woman can hardly imagine. What’s fascinating about Wheeler is how she triumphed by turning those restrictions to her advantage. Every aspect of her career path is rooted in appropriate domesticity, from designing textiles to decorating the women’s pavilion.

Similarly, the Society of Decorative Arts and the Women’s Exchanges sought not to break the barriers preventing them from participating in “men’s work,” but instead championed the value of that domestic work which was considered to be women’s “natural sphere.”

There is much about Candace Wheeler’s career that can seem alien to those of us schooled to look for “kick-ass,” “bad-ass” heroines. But a respectful consideration of her accomplishments also shows us how genuinely “rad” a woman can be, even as she played completely by the rules.

Contributed by Erica Obey. Erica is the author of The Horseman’s Word, as well as three other historical and paranormal novels, including the award-winning The Curse of the Braddock Brides, which Publishers Weekly called a “smoothly unfolding, satisfyingly twisty tale of lurid legends, deadly blackmail, hidden identities, international spycraft, and practical romance.” See the Erica Obey page on Amazon*.

She holds a Ph.D. in Comparative Literature and pursued an academic career specializing in the women folklorists of the nineteenth century, before she decided she’d rather be writing the stories herself.  There are three places you can find Erica when she’s not writing: on a hiking trail, in her garden, or taking tea at a nearby stately home – all in the name of research, of course!  Visit her at Erica Obey. 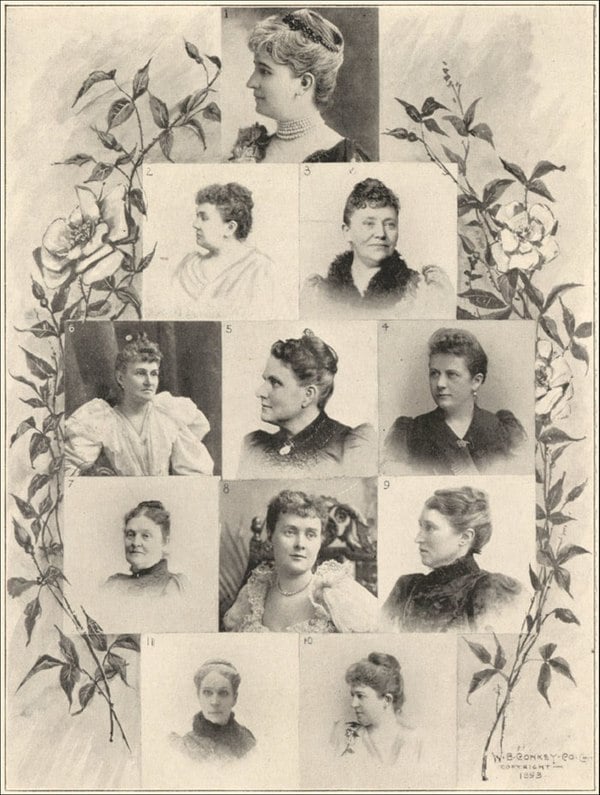 *These are Amazon affiliate link. If the product is purchased by linking through, Literary Ladies Guide receives a modest commission, which helps maintain our site and helps it to continue growing!