That is the New Rhythm: Mina Loy and Marianne Moore 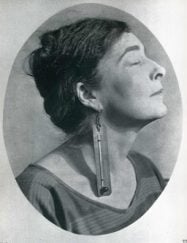 A reflection on the period in which Mina Loy and Marianne Moore, modernist poets (among other talents) crossed paths in the early 1920s. Excerpted from Everybody I Can Think of Ever: Meetings That Made the Avant-Garde by Francis Booth, reprinted by permission.

The poetry of Mina Loy was often compared and sometimes published next to that of the Baroness Elsa von Freytag-Loringhoven. Margaret Anderson and Jane Heap put them together in the issue of Little Review that immediately followed their obscenity conviction for printing Ulysses, some time around 1920.

Man Ray took photographs of both of them specially; opposites in looks but potential sisters in their view of female sexuality. And the only issue of the magazine New York Dada had both an article mocking Loy’s relationship with Cravan and a portrait of the Baroness, this time wearing only her jewelry, as the “naked truth” of Dada.

A confluence of poets

Loy was also often compared to Ezra Pound; she wrote a paper called “Modern Poetry,” in which she talks about the relationship of poetry to music. In it she says that only one poet has really ever made “the logical transition from verse to music” — Pound.

To speak of the modern movement is to speak of him; the masterly impresario of modern poets, for without the discoveries he made with his poet’s instinct for poetry, this modern movement would still be rather a nebula than the constellation it has become.

Like William Carlos Williams, Loy believed that it was “inevitable that the renaissance of poetry should proceed out of America, where latterly a thousand languages have been born, and each one, for purposes of communication at least, English.” Loy is not interested in the past, only in the future, and one of the most futuristic poets for her is e.e. cummings; where “other poets have failed for being too modern he is more modern still, and altogether successful.”

She does admire some poets from what she calls the past though, including H.D. and Marianne Moore “whose writing so often amusingly suggests the soliloquies of a library clock.” This is not necessarily praise from such a freethinking and passionate woman – the words “library” and “clock” suggest the aloof austerity of which H.D. was in awe; Moore was in fact a librarian.

Even though she was at Bryn Mawr and knew them all, Marianne Moore was never close to Ezra, Bill, or Hilda throughout her life; she was never part of any movement or any set, and in both her life and her poetry she was quite reserved and austere. Moore lived in a tiny apartment with her mother, who was gay, sharing a bed until her mother’s death.

In awe of Marianne Moore

Both men and women were attracted to Moore but she seems to have had no real relationships with either sex. H.D. seems to have been rather in awe of Moore. As late as October 28, 1934, HD wrote to Bryher:

“I have had my first real fan letter from a woman – Marianne – of all people – write this in letter of gold – And I hope you will never doubt from such worms as myself the admiration which the shining face of your courage evokes! … I am positively limp!!!! I was terrified of M.M.”

William Carlos Williams was also slightly in awe of Moore.

“She had a head of the most glorious auburn hair and eyes – I don’t even know to this day whether they were blue or green – but these features were about her only claim to physical beauty. We all loved and not a little feared her not only because of her keen wit but for her skill as a writer of poems. She had a unique style of her own; none of us wanted to copy it but we admired it.”

In Moore’s only published reference to Loy she talks about Loy’s “sliced and cylindrical, complicated yet simple use of words.” Again, not exactly pure praise. Around 1920, many people were comparing Loy and Moore. Ezra Pound bracketed them together, calling their style logopoeia, the poetry of ideas. This wasn’t praise either; at the time he was promoting Imagism, the poetry of things, in the work of H.D. and Amy Lowell. Pound said that Loy and Moore didn’t use arresting images or noble sentiments, their work was just “a dance of the intelligence among words and ideas … A mind cry, more than a heart cry.” 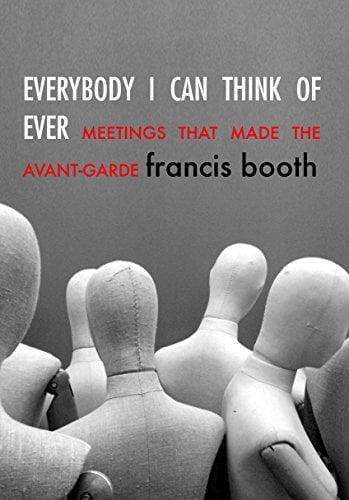 T.S. Eliot, in The Egoist, ranked Moore higher than Loy in his personal pantheon but Pound quickly replied saying that some of Mina’s lines were “perhaps better than anything I have found in Miss Moore.” In practice, Pound championed and supported them both.

In a very long letter of April 22, 1921 to Anderson and Heap, soon after they had been fined $50 each for publishing sections of Ulysses and barred from publishing any more, Pound lists his suggested contributors for the next issue; referring to Mina and Marianne only by their first names.

The two women first met in 1916 when Marianne saw Mina playing the wife opposite William Carlos Williams at the Provincetown Players. They met again in 1920, when McAlmon took Loy to the apartment at St Luke’s Place in Greenwich Village where Marianne the librarian lived with her mother, as if playing to her image as a timid spinster.

In McAlmon’s fictional version, Loy says that her life must be the result of “some suppression or cowardice.” But Marianne is very welcoming and tells Mina she has wanted to talk about her poetry, saying that her job keeps her from writing. Mina says to her: “you observe things too uniquely to let any paid job interfere, though I presume you believe in self-discipline and duty more than some of us.”

Williams knew both Moore and Loy, and recorded a dinner where both women were there so everyone could compare them – their physical appearance if not their poetry.

“Marianne Moore, like a rafter holding up the superstructure of our uncompleted building, a caryatid, her red hair plaited and wound twice about the fine skull, though she was surely one of the main supports of the new order, was no luckier than the rest of us. One night (Mina Loy was there also) we all met at some Dutch-treat party in a cheap restaurant on West Fifteenth Street or thereabouts.

There must have been twenty of us. Marianne, with her sidelong laugh and shake of the head, quite childlike and overt, was in awed admiration of Mina’s long-legged charms. Such things were in our best tradition. Marianne was our saint – if we had one – in whom we all instinctively felt our purpose come together to form a stream. Everyone loved her.”

That is the new rhythm

In her article “Modern Poetry,” Loy singles out Williams for special praise as one of the few writers who embodies her idea of a bridge between the past and the future.

“Williams brings me to a distinction that it is necessary to make in speaking of modern poets. Those I have spoken of are poets according to the old as well as the new reckoning; there are others who are poets only according to the new reckoning. They are headed by Dr. Carlos Williams. Here is the poet whose expression derives from life. He is a doctor. He loves bare facts. He is also a poet, he must recreate everything to suit himself. How can he reconcile these two selves?

Williams will make a poem of a bare fact – just show you something you noticed. The doctor wishes you to know just how uncompromisingly itself that fact is. But the poet would like you to realisze all that it means to him, and he throws that bare fact onto paper in such a way that it becomes part of Williams’ own nature as well as the thing itself. That is the new rhythm.” 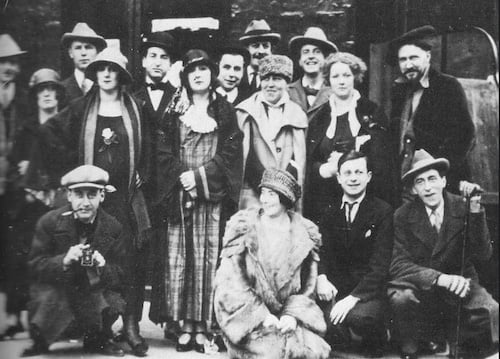