By Beatrice Ricketts | On | Comments (0)

This was just the start of what would be a radical life as a member of the French Communist Party, writing more than fifty novels and essays and, most importantly, coining her defining theory: ecofeminism.

One of the best-known leaders of the French feminist movement, d’Eaubonne’s most famous work was her essay “Le Féminisme ou Le Mort” (Feminism or Death), published in 1974.

Up until last year, I had never heard the name Françoise d’Eaubonne. Perusing the various muddled titles in a French second-hand book market I happened upon a book with a rather interesting cover, and still more interesting blurb:

Using my rather amateurish French, I translate: “for perhaps the first time in the history of science fiction, the hero, the pilot of the spacecraft is a woman!” I was intrigued. Why have I never heard of this? If I am to believe the blurb, isn’t this revolutionary? 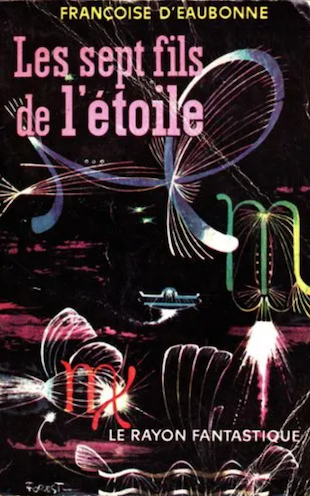 Three euros poorer, clutching Les Sept Fils de l’Étoile, written in 1962 by the mysterious Françoise d’Eaubonne, I was on the quest to discover this forgotten heroine. A barely existent Wikipedia page, most of her books to be found on no site, let alone an English-language one, I felt in possession of a secret treasure: I had to turn to discovering her through the book itself.

Reading the first few pages, it is not hard to see that d’Eaubonne was ahead of her time, her work seething with feminist and colonialist criticism (phrases such as “it’s rare for a woman to get to my job level” and “a result of earthly racism”), but in a foreign landscape: space. D’Eaubonne seemed to be especially concerned with the environment.

From there I could finally find information on this enigma. Later branded “apolitical and ahistorical,” ecofeminism was d’Eaubonne’s seminal theory. She asserted that the patriarchy views both women and nature as wild and unruly, and that in a utopian world, there would be equality under the harmony of nature, with all organic functions respected.

A contemporary and friend of Simone de Beauvoir, d’Eaubonne wrote to her in a letter: “nous sommes toutes vengées.” This means “we are all avenged.” She is right; it is therefore time for d’Eaubonne to have a resurgence.

Contributed by Beatrice Ricketts. Beatrice is a student studying English literature and French in the south of England, and occupies her time reading (of course!) mainly classics, French and Russian literature. She is in practice to become a writer on literary theory, or perhaps a novel of her own one day.

More about Françoise d’Eaubonne and ecofeminism