An Interview with Marjorie Kinnan Rawlings 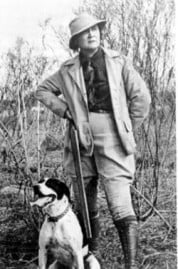 Excerpted from Writers and Writing by Robert van Gelder, 1946. An interview with Marjorie Kinnan Rawlings, the author of The Yearling and Cross Creek, who discusses her way of life and methods of work. This interview was conducted on November 30, 1941:

“Writing,” said Marjorie Kinnan Rawlings, “is agony. I stay at my typewriter for eight hours every day when I’m working and keep as free as possible from all distractions for the rest of the day. I aim to do six pages a day but I’m satisfied with three. Often there are only a few lines to show.”

Is it worth such complete dedication?

“I’m sure it is. Without the work I’d be a tangle of frustrations. An ivory tower,” she continued, “is impossible now. The news is always with you wherever you go. But physical isolation has its uses.” She lives in a cottage on a sand dune about ten miles south of St. Augustine, breaks the routine of work by occasional drives into St. Augustine to see a motion picture.

“Della and I drive in, with the dog in the back seat. Della, my maid, is a graduate of Bethune College at Daytona. She doesn’t mind the loneliness as long as there is enough around the house for her to read. I’m holding out a set of Proust for the long Summer afternoons.”

Mrs. Rawlings does most of her work during the Summer because there are fewer interruptions during that season. “Writing as I do, out of emotion rather than through a mental process, I find that I can make progress only if I keep living with my characters and let nothing come between.”

She lets the new issues of two magazines, Nature, published by the Museum of Natural History, and the Atlantic, break into her working hours.

But even in the evenings, during her months of writing, she reads no fiction. “I am avid for biography, history and essays.” When not actively writing on something she reads new novels and returns to the backlog of her library only to reread Hemingway, “John Brown’s Body” by Stephen Vincent Benet, and Proust.

In most of her writing Mrs. Rawlings “makes with the heart,” but she discovered a year or so ago that she possessed a hitherto unsuspected talent for high comedy.

Her rather searing short story, “The Pelican’s Shadow,” was published by The New Yorker and has already been reprinted in anthologies. There is no more sweetness in this tale than there is in the bulk of the work of Sally Benson or Dawn Powell. She said that she was delighted to discover that she could do that kind of thing and intended to do more. 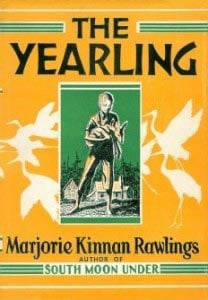 She spoke of the helpfulness of her Florida neighbors. “When I was planning The Yearling I needed some good bear-hunting scenes because I knew that they were to be part of the book. I told the old guide why I wanted to go on bear hunts and he took me out on a number of hunts and told me all the facts he could think of.

All the people down there are very good in that way. They realize that they are helping to preserve a way of life that is passing, helping to make records of what they have learned and what their ancestors knew.”

It was suggested that one fortunate aspect of this was that she was dealing with people who had no intention of writing books themselves and so had no reason to hold back.

“No, you’re wrong. Many of them do intend to write books. They come to me and ask me to collaborate with them. I’m to do the writing but it will be their story.”

Born in Washington, Mrs. Rawlings worked on newspapers in many cities as a reporter and feature writer. She mentioned employment on a Hearst newspaper as a sob-sister and commented that it was “a rough school, but I wouldn’t have missed it. So long as you can avoid the stereotyped pattern you learn a lot when you must put down what people said and how they acted in great crises in their lives. And it teaches you objectivity.”

Continually while she supported herself through newspaper work she attempted to write fiction for the magazines. 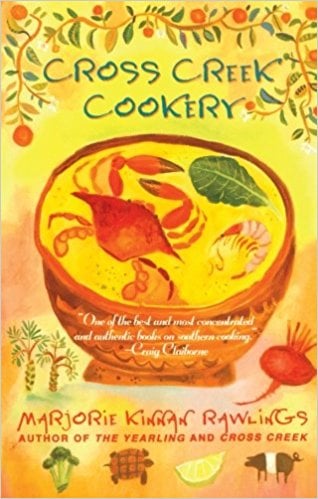 “I tried to write what I thought they would be most likely to buy and all that brought me was rejection slips. Then in 1928 I had an opportunity to buy an orange grove in Florida and I bought it, left the newspaper, and settled down to give all my time to fiction.

Still the stories didn’t sell so I gave up. I thought the best thing might be to write poetry–that would satisfy the urge to create and would bother no one. I wouldn’t have to worry much about getting it published as there’d be very little chance of that and I could rule writing out as a means of income.

“But then I thought–just one more. And I wrote a story that seemed very far from ‘commercial,’ that–it seemed to me–no editor would want to buy, but that had meaning for me. It sold like a shot and I’ve had no trouble about selling since, though I never have tried to write ‘commercially.’” 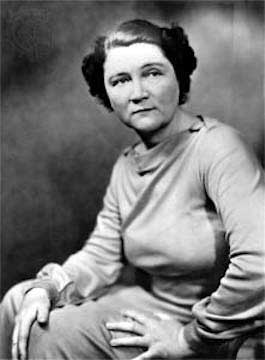 Perhaps because of her long efforts to give editors what they presumably wanted, every line continues to come hard. “I have no free swing in what I write, no little miracles. I let my novels mature for several years, know almost exactly what I want to do in them and slowly do it.

I make the first draft as perfect as I can and do comparatively little rewriting because what I toilsomely put on paper is the best that I can do. For me there is no improving it. The phrase, the line, the paragraph–they never are quite right, as it seems to me, but I keep plugging, getting them as near right as is possible for me.

Every thought, every description, every bit of dialogue, is as compressed, as tight, as I can fashion it. It is all self-conscious and perhaps that is wrong, but it is the only method that I can use.”

2 Responses to “An Interview with Marjorie Kinnan Rawlings”