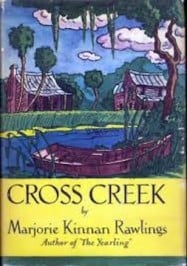 Marjorie Kinnan Rawlings (1896 – 1953), the Pulitzer Prize-winning American novelist and memoirist was known for her writings about her adopted home of Cross Creek, Florida, where she bought an orange grove in the late 1920s and lived for many decades.

She was fascinated by the people and local culture, and gathered her observations into Cross Creek, the memoir discussed here, and a compilation of recipes, Cross Creek Cookery. Both were published in 1942.

Rawlings was attracted to the people of Cross Creek, who were called crackers (though at the time, this wasn’t a disparaging term). At first they were wary of her as an outsider and  resisted her eager questions and interest. Eventually they warmed to her, and she began recording detailed descriptions of the people, their dialect, the flora and fauna, and the local food and folkways.

Success and a lawsuit

After some fits and starts with her writing career, Rawlings achieved success with the 1938 novel The Yearling, for which she received that year’s Pulitzer Prize. But the time Cross Creek was published just a few years later, she was a well-established and respected author.  In addition to the regular and book club editions, Cross Creek  was released in a special armed forces edition to be sent to servicemen during World War II.

An autobiographical account of her relationships with her Floridian neighbors, it was quickly followed by Cross Creek Cookery (1942). She loved to cook and entertain, finding the process a lot less painful than writing, which she sometimes described as “agony,” and in this offbeat cookbook, one senses that she’s in her element.

In 1943, Rawlings faced a libel suit resulting from the publication of Cross Creek. It was filed by a neighbor, Zelma Cason. She felt that Rawling had insulted her by describing her as “an ageless spinster resembling an angry and efficient canary.”

Rawlings eventually won the case and enjoyed a brief moment of satisfaction, but the verdict was overturned in appellate court and she was ordered to pay damages in the amount of one dollar.

A brief description from the 1996 reissue edition

From the 1996 reissue edition (Simon & Schuster): Cross Creek is the warm and delightful memoir about the life of Marjorie Kinnan Rawlings—author of The Yearling—in the Florida backcountry.

Originally published in 1942, Cross Creek has become a classic in modern American literature. For the millions of readers raised on The Yearling, here is the story of Marjorie Kinnan Rawlings’s experiences in the remote Florida hamlet of Cross Creek, where she lived for thirteen years. From the daily labors of managing a seventy-two-acre orange grove to bouts with runaway pigs and a succession of unruly farmhands, Rawlings describes her life at the Creek with humor and spirit.

Her tireless determination to overcome the challenges of her adopted home in the Florida backcountry, her deep-rooted love of the earth, and her genius for character and description result in a most delightful and heartwarming memoir.

A brief description from the original 1942 edition

From the 1942 Grosset and Dunlap edition of Cross Creek by Marjorie Kinnan Rawlings: This intimate, vivid, and fascinating narrative by the author of The Yearling has all the same humor and boundless appeal as its Pulitzer Prize winning predecessor.

For many  years Marjorie Kinnan Rawlings was been one of the leading citizens of the tiny, remote Florida hamlet from which this book takes its name. This is the story of Cross Creek, of “Yearling Country,” its people, its scenery and wildlife, told by a writer wholes genius for character portrayal and description is unequalled.

Here are brilliant and fascinating descriptions of the Florida scenery, the orange groves, the swamps, the scattered homesteads, and of the animals and reptiles of the region. the reader sees, and knows, Cross Creek in every season of the year. Plus, these are all real people, headed by the author herself, whose Florida autobiography this narrative might well be called.

Any one of the people in this book might be the hero or heroine of a full-length novel, and the background against which  they move is everlastingly fascinating. 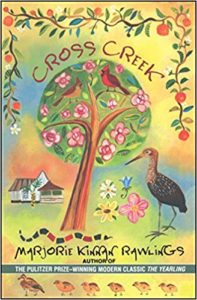 “We cannot live without the Earth or apart from it, and something is shriveled in a man’s heart when he turns away from it and concerns himself only with the affairs of men.”

” … we are tenants and not possessors, lovers, and not masters. Cross Creek belongs to the wind and the rain, to the sun and the seasons, to the cosmic secrecy of seed, and beyond all, to time…”

” …to achieve content under sometimes adverse circumstances, requires first an adjustment within oneself, and this I had already made, and after that, a recognition that one is not unique in being obliged to toil and struggle and suffer. This is the simplest of all facts and the most difficult for the individual ego to accept.”

“Madness is only a variety of mental nonconformity and we are all individualists here.”

“Sift each of us through the great sieve of circumstance and you have a residue, great or small as the case may be, that is the man or the woman.” 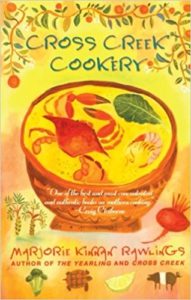