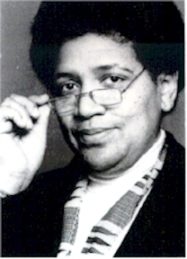 Audre Lorde (1934 – 1992), a self-identified “black lesbian, mother, warrior, poet,”  used her many talents as a writer to express ideas about intersecting oppressions, especially those faced by women.

As society moved toward the anti-war, feminist, and civil rights movements, especially in the 1970s, she explored more political themes in her poetry and essays. There are many reasons to love Audre Lorde and keep her legacy alive. Here are just a few:

1. She was a self-possessed trailblazer from an early age

Born to Caribbean immigrant parents in 1934 and brought up in Harlem, NYC, Audre Lorde wrote her first poem in eighth grade, despite being so nearsighted as a child that she was legally blind.

It was around this time that she dropped the ‘y’ from her birth name, Audrey, explaining in her autobiography Zami: A New Spelling of My Name that she liked the artistic symmetry of Audre Lorde.

She was the editor of her school magazine, and when a faculty advisor rejected a sonnet she’d written about love, she sent it to Seventeen magazine instead. They published it, paying more money to the teenage Audre Lorde than she made from the next decade of her writing career.

2. She shared visionary insights about intersectionality

A true visionary and pioneer, Audre Lorde was ahead of her time in many ways, writing and speaking with courage, honesty, power and panache about issues which continue to divide communities and movements to this day.

In her 1984 collection of essays and speeches, Sister Outsider, she identified the need to recognize and utilize difference in the fight against oppression:

“[It] is within our differences that we are both most powerful and most vulnerable, and some of the most difficult tasks of our lives are the claiming of differences, and learning to use those differences for bridges rather than as barriers between us.”

In an address quoted in I Am Your Sister: Collected and Unpublished Writings of Audre Lorde, she sums it up like this:

“Too often we pour energy needed for relating across difference in[to] pretending these differences are insurmountable barriers, or that these differences do not exist… But together, the strength of our differences can illuminate our our politics with a skill and passion born of survival, and we can transform the very meaning of power within our lives.”

3. She took strong stands on privilege and power

If you’re a feminist and you use the internet, chances are you’re familiar with snark and smackdowns about privilege. But while Audre Lorde absolutely recognized the importance of identifying and acknowledging privilege, she also saw possibilities for it to be leveraged as a force for positive change. In a 1989 address at Oberlin College, she said:

“Your privilege is not a reason for guilt, it is part of your power, to be used in support of those things you say you believe… How much of your lives are you willing to spend merely protecting your privileged status?

Is that more than you are prepared to spend putting your dreams and beliefs for a better world into action? That is what creativity and empowerment are all about. The rest is destruction. And it will have to be one or the other.”

Feeling ready to take on the world? She continued:

“Your power is relative, but it is real. And if you do not learn to use it, it will be used, against you, and me, and our children. Change did not begin with you, and it will not end with you, but what you do with your life is an absolutely vital piece of that chain.”

4. She warned that “Your Silence Will Not Protect You”

In between writing her numerous collections of poetry and essays, speaking at black, feminist and lesbian events around the world, teaching, traveling and co-founding Kitchen Table, the first American publishing press for women of color, a recurring theme for Audre Lorde was the need to connect communities by breaking institutionalized silences.

In The Transformation of Silence into Language and Action, she wrote:

“We were never meant to survive. And that visibility which makes us most vulnerable is also our greatest strength. Because the machine will try to grind you into dust anyway, whether or not we speak. We can sit in corners mute forever while our sisters and our selves are wasted, while our children are distorted and destroyed, while our earth is poisoned; we can sit in our safe corners, mute as bottles, and we will still be no less afraid.” 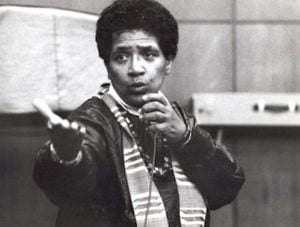 5. She argued that parenting is political

With her lesbian partner of twenty years, Audre Lorde raised two children, both of whom grew up to be brilliantly brave and badass political activists in their own right.

Although acknowledging the joy of bringing up children, recognising that their childhood years were “the most chaotic and well as the most creative of my life,” Audre also wrote with her trademark insight and observation about the pressures and anxieties impacting their family, acknowledging the need to own and identify her own anger at social and cultural injustices in order to ensure it wasn’t misdirected towards her kids:

“[We were] afraid that our rage at the world in which we lived might leak out to contaminate and destroy someone we loved.”

Her essay, “Turning the Beat Around,” in Sister Outsider highlights her pride in equipping her children with  inner tools to analyze and change the world, concluding with these heartwarming observations:

“Our daughter and son are in their twenties now. They are both warriors and the battlefields shift: the war is the same… It stretches from the classroom where our daughter teaches Black and Latino third graders to chant ‘I am somebody beautiful,’ to the college campus where our son replaced the Stars and Stripes with the flag of South Africa to protest his school’s refusal to divest.

They are in the process of choosing their own weapons, and no doubt some of those weapons will feel completely alien to me. Yet I trust them, deeply, because they were raised to be their own woman, their own man, in struggle, and in the service of all our futures.”

For the rest of the article, see 10 Reasons to Love Audre Lorde by Jane Bradley, excerpted from For Book’s Sake, by permission.