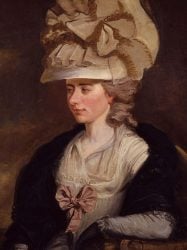 Fanny Burney, the British novelist and playwright best remembered for her first novel, Evelina (1778) was also an immensely prolific diarist. This introduction to the journals of Fanny Burney is excerpted from Killing the Angel: Early British Transgressive Women Writers ©2021 by Francis Booth. Reprinted by permission.

It has been argued that the diary is essentially a feminine form of writing; certainly, at one time writing a diary was far more likely to be done by a woman of a certain class than by a man.

Diaries are written for an audience of one though Fanny (Frances) Burney (1752 – 1840), later a wildly successful novelist, wrote in the first pages of her diary in 1768 that hers was for an audience of none. Her JUVENILE JOURNAL: ADDRESSED TO A CERTAIN MISS NOBODY, sets out to be:

… a Journal in which I must confess my every thought, must open my whole Heart! But a thing of this kind ought to be addressed to somebody – I must imagine myself to be talking – talking to the most intimate of friends – to one in whom I should take delight in confiding, and feel remorse in concealment: but who must this friend be? – to make choice of one to whom I can but half rely, would be to frustrate entirely the intention of my plan.

The only one I could wholly, totally confide in, lives in the same House with me, and not only never has, but never will, leave me one secret to tell her. To whom, then must I dedicate my wonderful, surprising and interesting adventures? – to whom dare I reveal my private opinion of my nearest Relations? the secret thoughts of my dearest friends? my own hopes, fears, reflections and dislikes – Nobody! To Nobody, then, will I write my Journal! . .  but why, permit me to ask, must a female be made Nobody? Ah! my dear, what were this world good for, were Nobody a female? 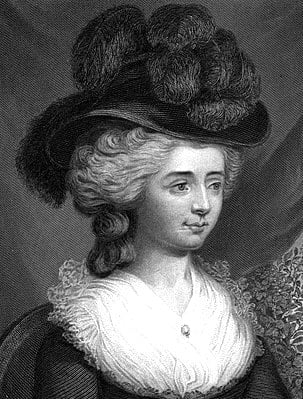 Writing for an audience of none

Burney’s young female friend, on being told of the journal’s existence, ‘says that it is the most dangerous employment young persons can have – it makes them often record things which ought not to be recorded, but instantly forgot. I told her, that as my Journal was solely for my own perusal, nobody could in justice, or even in sense, be angry or displeased at my writing anything.’

Writing for an audience of none, a woman could set down transgressive thoughts and ideas; things she could not otherwise even say, let alone write, without any concerns about literary style or quality of writing. The friend asks Fanny what would happen if the diary were found; ‘suppose anybody finds a part in which they are extremely censured.’

‘Why then,’ says Burney, ‘they must take it for their pains. It was not wrote for them, but me, and I cannot see any harm in writing to myself.’ As it turned out the young Frances had and did nothing to be ashamed of and her diary contains nothing that would have embarrassed her.

As well as a diarist, Burney was also a novelist and playwright, most famously the author of the highly successful three-volume epistolary novel Evelina, or the History of a Young Lady’s Entrance into the World, 1778. It was her first novel, published in an uncharacteristic act of transgression when she was twenty-eight and unmarried, and without her father’s knowledge at that, though her name was not given as the author on the early editions.

Burney took extensive precautions to hide her authorship, even employing her brother to sign contracts for her. Although most of Burney’s circle knew she was the author, and approved of the work, her identity was not widely known until it was revealed accidentally in writing by the otherwise-unknown George Huddesford, to Fanny’s great dismay.

Evelina was one of the first novels to have a respectable, young female protagonist – Moll Flanders, 1722 and Fanny Hill, 1748 are entirely different types of young lady – but was a critical as well as a commercial success. 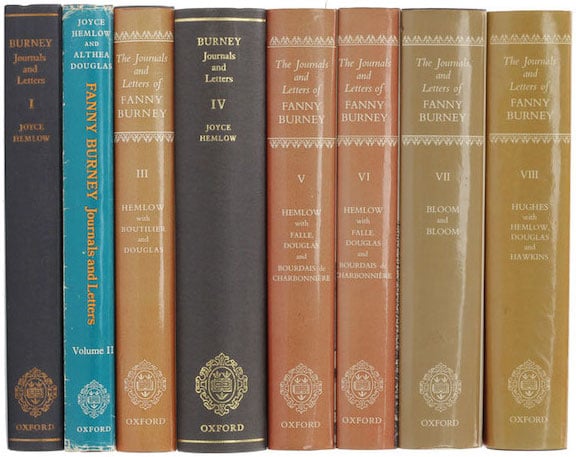 She writes novels yet warns against them

Burney soon published another successful novel about a young woman, Cecilia, Or Memoirs of an Heiress. In the ‘Advertisement’ for the book, Burney refers proudly to the success of her earlier novel.

The indulgence shown by the Public to Evelina, which unpatronised, unaided, and unowned, passed through Four Editions in one Year, has encouraged its Author to risk this second attempt. The animation of success is too universally acknowledged, to make the writer of the following sheets dread much censure of temerity; though the precariousness of any power to give pleasure, suppresses all vanity of confidence, and sends Cecilia into the world with scarce more hope, though far more encouragement, than attended her highly-honoured predecessor, Evelina. (July, 1782)

At the age of forty-one Burney married a poor Catholic French expatriate General of whom her father disapproved. The couple were rescued from poverty by the sale of a third novel with a heroine ending in ‘a,’ the five-volume Camilla. The first print run sold out; Burney made the astonishing sum of £1,000 (around £120,000 today) and made another £1,000 from selling the copyright. This is a rare and very early example of a woman writer subsidising her husband from her own earnings.

Although Burney herself was to do very well from novel-writing, in the Preface to Evelina she warns of the effects of novel-reading on impressionable girls – like Mary Wortley Montagu, Maria Edgeworth and her friend Hester Chapone, though Burney is perhaps being ironic.

Perhaps, were it possible to effect the total extirpation of novels, our young ladies in general, and boarding-school damsels in particular, might profit from their annihilation; but since the distemper they have spread seems incurable, since their contagion bids defiance to the medicine of advice or reprehension, and since they are found to baffle all the mental art of physic, save what is prescribed by the slow regimen of Time, and bitter diet of Experience; surely all attempts to contribute to the number of those which may be read, if not with advantage, at least without injury, ought rather to be encouraged than condemned.

The Wanderer, or Female Difficulties

Like her journals, Burney’s novels were not in the least transgressive and would be unlikely to trouble any innocent young woman. But like many of the women mentioned here, Burney was involved in politics, especially in France, where she was effectively exiled with her husband, though none of her published writings, especially her novels, were political in any way. In the preface to her fourth novel, The Wanderer, or Female Difficulties, which is addressed to her father, she says:

Here, they will simply meet, what the Author has thrice sought to present to them already, a composition upon general life, manners, and characters; without any species of personality, either in the form of foreign influence, or of national partiality. I have felt, indeed, no disposition, — I ought rather, perhaps, to say talent, —for venturing upon the stormy sea of politics. 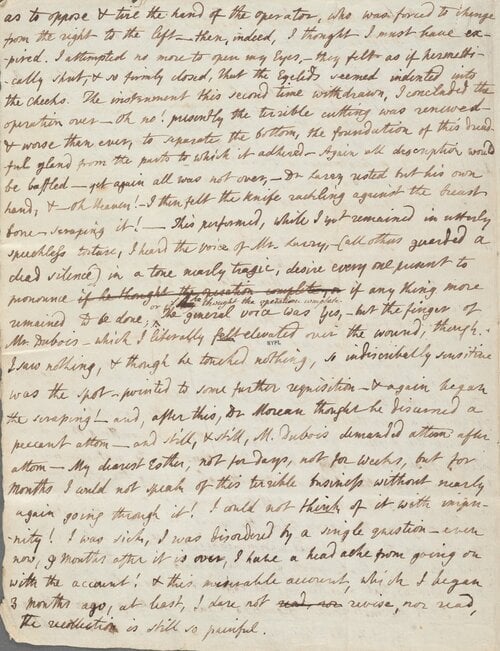 Documenting her own mastectomy

Despite her mild novels of manners, Burney wrote one of the most shocking descriptions in all literature of a woman’s experience, though it was never intended for publication: she wrote about her own mastectomy. As it was before the invention of anaesthetics, she was awake throughout. It is almost unbearable; you may want to skip the following if you’re squeamish:

I mounted, therefore, unbidden, the Bed stead – & M. Dubois placed me upon the Mattress, & spread a cambric handkerchief upon my face. It was transparent, however, & I saw, through it, that the Bed stead was instantly surrounded by the 7 men & my nurse. I refused to be held; but when, Bright through the cambric, I saw the glitter of polished Steel – I closed my Eyes.

I would not trust to convulsive fear the sight of the terrible incision. Yet – when the dreadful steel was plunged into the breast – cutting through veins – arteries – flesh – nerves – I needed no injunctions not to restrain my cries.

I began a scream that lasted unintermittingly during the whole time of the incision – & I almost marvel that it rings not in my Ears still? so excruciating was the agony. When the wound was made, & the instrument was withdrawn, the pain seemed undiminished, for the air that suddenly rushed into those delicate parts felt like a mass of minute but sharp & forked poniards, that were tearing the edges of the wound. I concluded the operation was over –

Oh no! presently the terrible cutting was renewed – & worse than ever, to separate the bottom, the foundation of this dreadful gland from the parts to which it adhered – Again all description would be baffled – yet again all was not over, – Dr. Larry rested but his own hand, & – Oh heaven! – I then felt the knife (rack)ling against the breast bone – scraping it!