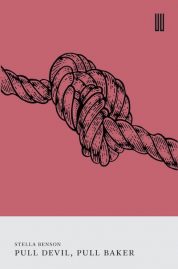 In the third chapter of Pull Devil, Pull Baker, “Oho, What Next? …” Stella Benson questions her role in this book: “Sometimes, I wonder whether I am editing the Count de Savine or he me. What seems to me the extreme remoteness of his point of view makes me quite giddy.”

This excerpt is from Nicola Darwood’s Afterword to Pull Devil, Pull Baker, originally published in 1933 and reissued by Boiler House Press (2022). All quotations come from the latter edition. Reprinted by permission of the publisher.

Benson’s thoughts on being an editor are illuminating as she occasionally edits, but often reproduces verbatim, Count Nicolas de Toulouse Lautrec de Savine’s accounts of his extraordinary and often outrageous escapades, escapades which might lead a reader to question that such a man existed.

His existence is not in doubt for Benson or for “hundreds of persons all over China.”  What she does wonder about, though, is his veracity as she highlights the apparent unreliable nature of the Count de Savine’s narrative:

“It would be difficult,” Benson states, “to say how many of his stories are literally true. He is a symbol — not only in our eyes but in his own, and to insist of the literal truth from a living symbol would be ungracious.”

Some of these doubts arise, perhaps, from the Count’s loquacious description of his lineage. Descended from both French and Russian aristocracy, he belongs “to one of the most distinguiched aristocratic famelys of Europe” (Benson preserves the Count’s misspellings, though she occasionally provides a clarifying footnote). 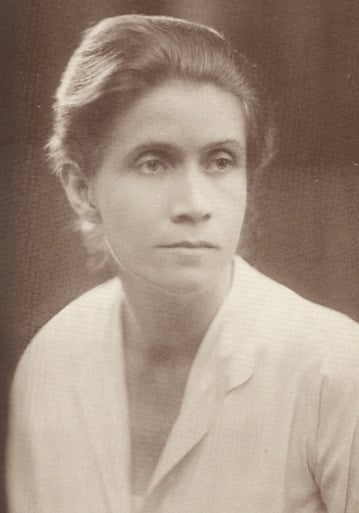 “How much of it must we believe?”

He cites one ancestor whose dying words at the Battle of Fontenoy in 1745 were “on moeur mais on ne se rend pas” (which can translate as “we moan but we don’t surrender”), a fitting motto for the Count, I would argue. Benson continues to question the complete truthfulness of the Count’s stories, although acknowledging that they derive from fact:

How much of it must we believe? Surely, very catholic memories imply a catholic experience. To take an ell, one must at least have been given the first inch. Nobody could tell a good fish story without having once caught at least a stickleback. There is no smoke without fire─no hot air without a spark of flame somewhere. Something must have happened to the Count de Savine, to enable him to describe everything.

She encourages the reader to indulge in an act of “spontaneity” when reading the Count’s stories, whether we believe him or not for, as Benson states, ‘he has hit upon a manner conspicuously appropriate to the story he has to tell.”

Stella Benson and the Count are “unnatural collaborators”

Benson first met the Count on Monday, April 13, 1931, in the Matilda Hospital in Hong Kong where he supplied her with a wealth of stories written in his own inimitable style, together with a cache of photographs of women.

Following Benson’s faithful transcription, The English Review agreed to publish some of the Count’s stories, and additional material was published in Adelphia, Everyman, Fortnightly Review, Review of Reviews, Spectator, Vanity Fair and the New Yorker, bringing the stories to the attention of a wide readership in the UK and the USA.

The full collection of stories, interspersed with Benson’s pithy commentary, was published in 1933 by Macmillan & Co in London and Harper & Brothers Publishers in New York.

Benson writes in Pull Devil, Pull Baker that she and the Count are “unnatural collaborators,” but we also get a sense in the opening chapter of the compassion that the Count evokes in her.

Benson recounts how her heart was ‘wrung’ on their first meeting, when it seemed to her “that the Count now, in the bleak freedom of old age, was less and less free,” but also that she recognises that the promise of the publication of his stories has revitalised him so that he has been “reborn as a literairy men.” 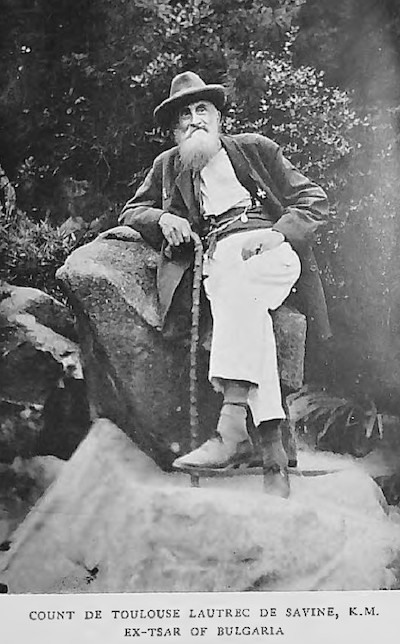 “Stories are his currency”

By the time the Count and Benson met in 1931, he was seventy-seven years of age. Penniless and reliant on charity, his tales were, for him, invaluable: “Stories,” Benson tells us “are his currency” as he exchanges a tale for ten dollars, feeling quite aggrieved if he is offered a mere five dollars for his tale.

Those stories though are told with verve, and excitement, with the Count always portraying himself as the hero or the hour, as the “great admirer of ladies” or as a feminist. This last self-identification is predicated on the high regard in which he holds mothers who:

… give to us our birth and put us on our fiets, and before it, form us in their suffering, the blood of their blood, the boneses of their women’s bones—maternity, who take their beauty, their helth, and some times their lifes. That brogth me to my great appressiation of womens, make me an ardent and confessed feminist. More, will I say, brogth me to the Culte of Womens . . .

His stories veer from ones in which he extols the virtues of his numerous “sweathearts,” and swashbuckling stories which would seem almost unbelievable but while the Count’s stories, fantastical and written with flair and panache, are enjoyable tales, arguably what is of more interest are the ways in which Benson has both edited these stories and added her own commentary.

She often interrupts the Count’s version of events with witty asides, discussions of editing practices, the addition of a remark meant to clarify points made by the Count, an extra story which acts as a counterpoint to the Count’s story, or a tangential discussion, for example about the title of the book.

At various points in Pull Devil, Pull Baker, Benson provides an account of her editing decisions and her own relationship with the Count’s stories. In chapter twelve, “Analysis by the Devil of the Baker’s Wares,” she considers the stories that she’s accepted and those which she has refused. Benson also discusses her decision to refuse “to have the shortcomings of grammar, spelling and vocabulary improved away.”

This decision is not taken so that she can hold the Count up to ridicule (after all, the Count is not a native English speaker) nor on account of “their ‘quaintness’ and occasional amusement,” but rather because she believes that the Count’s style “has great individuality and ingenuity.”

The penultimate chapter contains the Count’s story of “The Bygame Lizaro, the Blue Barth of Our Days, Mitting in a Prisoner Train, by my Transport from the Steps of the Bulgarian Thron to Tsar’s Jail at Petrograd in a Jail Carr.”

It is a continuation of the story of the Count’s claim, enthronement and removal from the position of the Czar of Bulgaria told earlier in Pull Devil, Pull Baker, and Benson wonders whether it is “our autobiographer’s truly true story, in disguise,” with every other story being merely “wish-fulfillment […] a romance.” 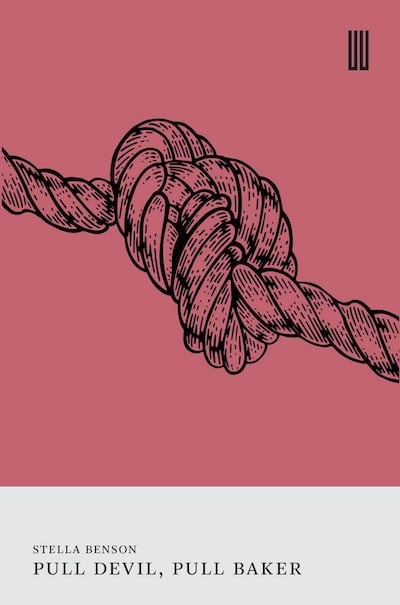 What counts as truth?

What, Benson wonders, counts as truth? Is it the stories that the Count tells? Is it the editor’s narrative, interruptions and retellings?

She also considers the reader’s need for stories, for romance in a world that has seen the ‘war to end all wars’ in which lives were destroyed or ruined, where people “have adjusted themselves to the feeling of a world crumbling beneath them” and who find themselves “wary of surprises, through living all our lives in such a quait and quait unexpected world.”

But in contrast, as Benson states, the Count was born into a well-regulated world; his excitement comes in defying that world, in ‘tumbling in and out of grooves at right angles.’

In chapter fifteen, “A Draw is Declared: Baker and Devil Shake Hands,” Benson writes very effectively, and compassionately, about the “tug-of-war” between Baker (the count) and Devil (the editor). Here, as Benson concludes:

are the adventures of an adventurer who made his own destinations in a world that was not round—and believed in the destinations, even after he had walked past them. Here are the memories of an old man who has never grown old enough to be ashamed of his youth—who has never been ashamed of Romance, or of anything else in capital letters—of Experience—of Danger—of Reform—of Manhood—of Womanhood—of the Soul—of Love—of Life . . .

Leaping from frying pans to fires

As Benson says of the Count: “The world for him was really nothing but a series of frying-pans and fires, and his whole career a mere leaping from one to the other.”

In Pull Devil, Pull Baker, the reader is given a ringside seat; we can watch the Count jump from the frying pan into the fire and marvel at his escapades. We are fortunate indeed that we can sit on the sidelines, reading Benson’s commentary and the Count’s stories, stories that are “expressed with dash and [which] must be read with dash.”

But while we may read “with dash,” we can also appreciate Benson’s skill in bringing the Count’s colourful stories to our attention, a collection of “fragmentary, odd and spicy words […] sugared with brittle romance.”

Pull Devil, Pull Baker is no mere sugared confection, nor, as Benson believed, a “stunt — because it is not written by a writer,” but rather an extraordinary text which demonstrates Benson’s wit and generosity, but also her ability to experiment with form and genre.

Contributed by Nicola Darwood, a senior lecturer in English Literature at the University of Bedfordshire, UK. Her research focuses mainly on twentieth-century women writers; she has published work on Elizabeth Bowen, including A World of Lost Innocence: the fiction of Elizabeth Bowen (2012), and Stella Benson.