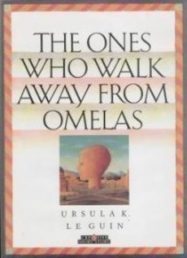 In the short story “The Ones Who Walk Away from Omelas” (Variations on a Theme by William James), Ursula Le Guin presents us with a utopia that turns out to include an imperfect, even nightmarish dystopia.

The tension between these two heaven-and-hell extremes could be summed up in a pull between the impulse to leave in the title and the joyous arrival of the festival that sets the stage.

A carefree community that seems pleasing and just, turns out to be structured on injustice and ultimately untenable for some of its citizens.

Ethical confusion arises both within the fictional world of the story and when the reader attempts to reconcile that textual space with the real world counterpart to which it refers.

Le Guin considers the story an allegory of U.S. culture at the time of the Vietnam War, inspired by the “shock of recognition” she experienced upon reading this passage from William James:

“If the hypothesis were offered us of a world in which … millions [should be] kept permanently happy on the one simple condition that a certain lost soul on the far-off edge of things should lead a life of lonely torment… even though an impulse arose within us to clutch at the happiness so offered, how hideous a thing would be its enjoyment when deliberately accepted as the fruit of such a bargain?”

Le Guin contends that in this passage, “The dilemma of the American conscience can hardly be better stated.” In the story, a community inhabits a wonderful, fairytale world free of illness, anxiety, and social strife. The Omalasians subscribe to a social contract contingent upon the exploitation of one child to ensure the happiness of all other citizens.

The author pits brute reality against fiction’s capacity to conjure illusory solutions and offers no easy answers. Some mistakenly argue that Le Guin supports the non-compliance of those who walk away. Neither Le Guin nor James, however, would necessarily applaud the members who choose to leave this community, for to do so, would not change the status of the suffering child.

While the choice to walk away from the hideous bargain Le Guin puts forth may seem correct at first, a more careful reading suggests that both Le Guin and James would elect to stay in Omelas, imperfect as it turns out to be.

Each would likely insist on a dynamic ethical system existing and evolving among and dependent upon all community members. To withdraw from this fellowship would be comparable to betraying the social contract and abdicating responsibility for the child’s lot.

Rather than offer a utilitarian excuse — the good of the many outweighs the good of the one — they would likely place emphasis on the incarcerated lost soul, who stands simultaneously inside and outside the society, sequestered in its dungeon in the center of town. I

nstead of dallying with escapist fantasies, Le Guin ultimately engages the utopian trope in order to put forth a political statement that becomes increasingly clear as the story evolves. 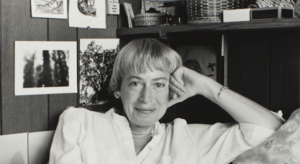 A key aspect of this story and a clue to Le Guin’s opinion on the dilemma of departure manifests in the way the fiction itself contrives to hold the reader accountable as a virtual Omalasian, fully aware of parallels between the imaginary land and contemporary Western capitalist, imperialist society.

The reader cannot not participate in the fiction, just as each citizen cannot not participate in Omelas’ horrible social contract. Le Guin creates a narrator who acts as a Jamesian “judicial investigator,” inviting the reader to wrestle with the moral dilemma presented whilst roping him/her/them into a terribly uncomfortable position by using several rhetorical tactics.

The author sets up structural tensions in order to lure the reader into making a choice that she refuses to make overtly. By involving the reader as co-creator of this fantasy world, she implicates the reader in the decision acted out by the characters, both those who stay and those who leave.

“Perhaps it would be best if you imagined it as your own fancy bids … for certainly I cannot suit you all” declares the narrator.

So, Omelas becomes a relative utopia, perfectly modeled in the mind of each reader. The lushness of the language and the rhetorical power of the telling augment the seduction of this collaborative relationship between narrator and reader.

Who will stay and who will leave?

Le Guin starts us off in a highly poetic mode. She foregrounds the neat tension that will be the central dilemma of the story when she titles it with a “walk [ing] from,” then starts the narration with a “[coming] to.” Who will stay and who will leave? The main problem of the tale has already evidenced itself.  She has stylized her text so that we are far from the realm of the “standard” language of communication.

Instead, our eyes and minds rest on the page where she foregrounds the materiality of language itself. The breathless, long lines of the first paragraph mimic the festival parade the words describe. Le Guin alliterates the sounds of the words: “mauve and grey, grave…” echoing the sonic features with a chiastic au-gr / gr-a flip.

She employs the assonance of the long i-sound in the line, “high calls rising like the swallows’ crossing flights…” as the birds spread their wings. The horses themselves are personified as the scene springs to life. 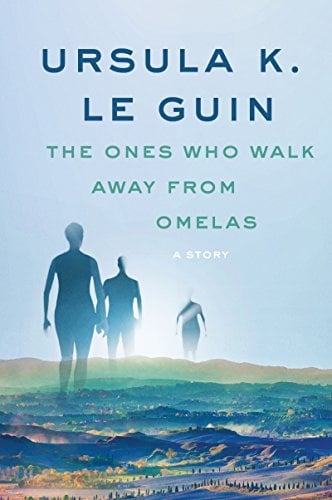 The Ones Who Walk Away from Omelas on Amazon

Next, the narrator makes two moves that jerk us out of traditional fairy tale mode, waking us from the lull of gorgeous language. First, she takes a meta-textual (or meta-discursive) turn in which the text calls attention to its own project: telling a story.

The narrative voice seems to stand outside the text and comment on it, reflexively. She problematizes her own tale-telling goal by questioning the effort of expression itself: “How is one to tell about joy? How to describe the citizens of Omelas? … I wish I could describe it better.”

This clumsy gesture comes across as ironic, following on the heels of the first paragraph’s masterful display of technical skill in crafting a story. The narrative voice’s move to divest herself of authority and responsibility for defining Omelas further implicates the reader in completing the construction of this anti-utopia.

In a second important turn, the narrator addresses us directly. Thus, we as readers are drawn into the story, as virtual or contingent inhabitants of Omelas as well. Once the narrator starts generalizing about our “bad habit,” we become a bit uncomfortable, without a voice of our own in the text with which to explain or defend ourselves.

We do not want to accept her definition of us: “we have a bad habit… of considering happiness as something rather stupid.”

The treason of the artist

Echoing the philosophy of Hannah Arendt, she dismantles the very artistry she just demonstrated, “This is the treason of the artist: a refusal to admit the banality of evil and the terrible boredom of pain.”

We begin to understand that our delicious picture of the city of Omelas actually disguises a dirty secret, necessary to its survival. We eagerly let ourselves be drawn into the initial festivities, only to find ourselves abruptly confronted with a serious moral dilemma.

The ungendered, incarcerated child locked in a basement serves as a trope of suffering, a ritual sacrifice, and bears a horrifying burden for the sake of its fellow citizens’ joy. The child, held captive under unspeakable circumstances in an ambiguously public/private space, functions as a scapegoat for the town.

Le Guin has noted, that she noticed a sign reading Omelas, in her rear-view mirror, as she drove away from Salem, Oregon. Through this linguistic reversal, she evokes the notorious colonial New England town where 14 women deemed “witches” were executed to preserve the “public good” between 1692-1693.

Neither choice, to stay or to leave, is without serious consequences, for even those who leave have not escaped responsibility for what goes on in the basement. To refuse to participate in this outrage by partaking in the happiness it engenders does not solve the material situation of the suffering child. It ensures neither its comfort nor release.

To leave is ironically, to not vote, to not act. In fact, several critics have pointed out the Omalasian’s bad faith suggested by the weak defense of the child’s incarceration, such as, “It is too degraded and imbecile to know any real joy.”

The citizens attempt to justify their collective, callous torture of the child by stating that it is damaged beyond redemption, despite the fact that has memories of an alternate existence and assumes it is being punished for misbehavior. Granted, more than one individual has left Omelas, so a new community could conceivably establish itself elsewhere.

Le Guin refers to the Ones, stressing their plurality and individuality at once. Yet, why should this uncharted realm that may not exist be any better at all?  One can simply insist on the negative space of not-Omelas (the anti-anti-utopia) as symbolic of the community’s betrayal.

Utopias of any stripe exist as fictions, and can only seem, not be. Yet, they can reflect or express phenomena parallel to real-world situations and potentialities. Le Guin’s anti-utopia seems, by its very imperfection, to approach our world more closely.

The highly aestheticized nature of her story, its overt constructedness, should alert the reader to the deceptive enticements of art, the seduction of beauty, the distance between fiction and reality.

The temptation to locate the story’s treachery in the fiction itself rather than in the real world to which it corresponds parallels the mistaken characters’ urge to leave Omelas altogether.

While the impulse to flee this tainted paradise, this fictive realm may be revolutionary in itself, the act of going, when read against James’ Pragmatic philosophy, the traces of Le Guin’s creative act, and their common belief in communal ethics, cannot be considered the morally sound choice.

James, William, “The Moral Philosopher and the Moral Life.” The Will to Believe and Other Essays in Popular Philosophy. New York: Dover, 1957.

A longer version of this article appeared as “Reading Through Fictions in Ursula Le Guin’s The Ones Who Walk Away from Omelas.” ANQ: A Quarterly Journal of Short Articles, Notes, and Reviews, vol. 24, no. 5 (2012): 228-232.