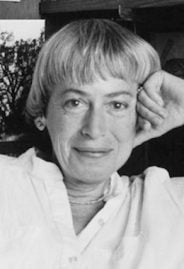 Ursula K. Le Guin (October 21, 1929 – January 22, 2018), born Ursula Krober, was known primarily as a masterful writer of science fiction and fantasy, though she wrote across many genres.

The imaginary worlds she created were commentaries on our real world, with all the complexities of human nature. She also produced children’s books, short stories, essays, and poetry.

Ursula K. Le Guin’s lifelong interest in mythology influenced her mastery of the fantastic in her writings. With an immensely prolific and respected career to her credit, she is perhaps best remembered for The Left Hand of Darkness and the Earthsea series. Lavinia (2008) also made quite a splash.

Some of the themes explored in her speculative works include gender and sexuality, freedom, political systems, and morality.

Ursula was born in Berkeley, California. Her father, Alfred L. Kroeber, was a respected anthropologist; her mother, Theodora Kroeber, was an author engaged in Native American matters. Ursula’s childhood was intellectually and artistically rich, with a large family and academic community.

She studied at Radcliffe College and Columbia University, earning her Master’s degree in French and Italian Renaissance literature by the age of twenty-two, in 1952.

While on a steamer sailing to France in 1953, she met Charles Le Guin, and the two married just a few months later. They settled in Portland, Oregon, where they brought up their three children, and where Charles, a historian, was a professor of history at Portland State University.

Ursula derived comfort and inspiration from the Eastern spiritual traditions of Taoism and Buddhism. She was quoted as saying: “Taoism gave me a handle on how to look at life and how to lead it when I was an adolescent hunting for ways to make sense of the world without going off into the God business.” 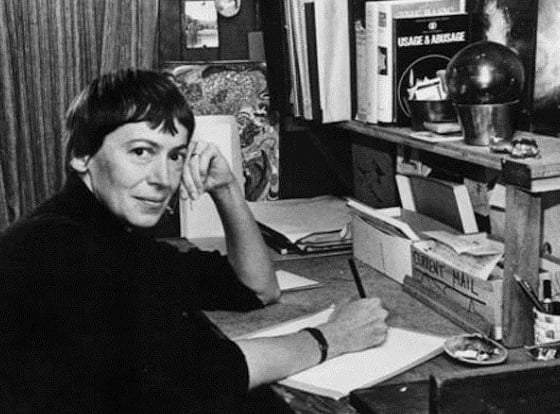 When Ursula began writing science fiction in the 1960s, the genre was largely written by and for white men. The books and magazine stories being published were largely space adventures with men of science as their heroes. While striving to become a published writer, Ursula collected many rejections over a number of years.

Ursula’s first novel, Rocannon’s World (1966), adhered to that trope, but a major change was on the horizon. According to a 2013 interview with Ursula Le Guin in The Paris Review :

“No single work did more to upend the genre’s conventions than The Left Hand of Darkness (1969). In this novel, her fourth, Le Guin imagined a world whose human inhabitants have no fixed gender: their sexual roles are determined by context and express themselves only once every month.

The form of the book is a mosaic of primary sources, an interstellar ethnographer’s notebook, ranging from matter-of-fact journal entries to fragments of alien myth.

Writers as diverse as Zadie Smith and Algis Budrys have cited The Left Hand of Darkness as an influence, and Harold Bloom included it in The Western Canon.

In the decades that followed, Le Guin continued to broaden both her range and her readership, writing the fantasy series she has perhaps become best known for, Earthsea, as well as the anarchist utopian allegory The Dispossessed, to name just a few books among dozens.” (— John Wray) 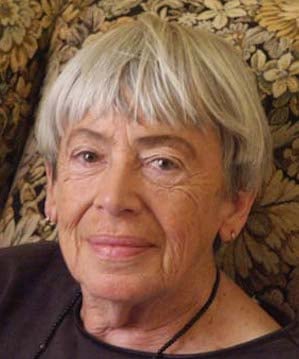 The Left Hand of Darkness and Earthsea

The Left Hand of Darkness (1969) was actually the fourth book in a series called the Hainish Cycle. It followed Planet of Exile (1966) and City of Illusions (1967).

Yet it was The Left Hand of Darkness that became one of her most visionary novels, and indeed, a groundbreaking work in the genre of science fiction. It describes the Gethenians, an alien race with no fixed gender characteristics until it’s time to mate. The book won the prestigious Nebula and Hugo awards.

A publisher encouraged Ursula to try her hand at young adult fiction, and this resulted in the publication of A Wizard of Earthsea in 1968. Some have speculated that this series was a kind of quiet predecessor of Harry Potter, being the story of a student wizard named Sparrowhawk.

Followed by The Tombs of Atuan (1970) The Farthest Shore (1972) and Tehanu (1990), Tales From Earthsea (2001) and The Other Wind (2001), the series became known simply as Earthsea. Though originally intended for the young adult market, readers of all ages have embraced this series, as evidenced by worldwide sales in the millions. 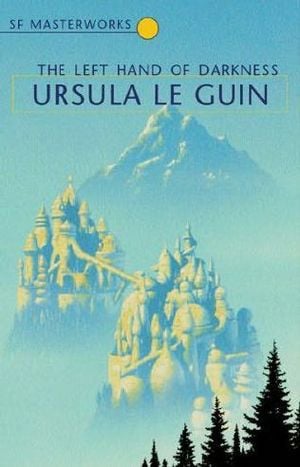 Ursula Le Guin instilled cultural exploration as a vital part to the genre of science fiction. Her characters vibrantly bursting from the page as scientists, anthropologists, diplomats, and travelers. She was described as “fiery” and with having “immense energy” by those who knew her best.

She also spoke eloquently about the art and craft of writing and considered storytelling as a cornerstone of human experience. Generously, she nurtured the dreams of aspiring writers on her website, dispensing advice in her Book View Café. She also wrote essays on feminist issues.

A slew of honors came her way during her lifetime, including the Living Legend Medal awarded by the Library of Congress. She won the National Book Award, the Kafka Prize, a number of Nebula and Hugo awards, and many others.

Ursula Le Guin died at her home in Portland, Oregon, on January 22, 2018, at age 88. Stephen King summed up her legacy with a brief tweet: “Ursula K. LeGuin, one of the greats, has passed. Not just a science fiction writer; a literary icon. Godspeed into the galaxy.”

Ursula Le Guin’s body of work is too vast to list here. See her complete bibliography on Wikipedia.

… and numerous other short stories, novels, and novellas, including