Gertrude Stein’s The Making of Americans (1925) 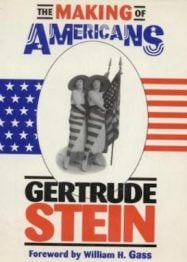 In 1925, Gertrude Stein’s The Making of Americans: Being a History of a Family’s Progress was published, though the author had finished it many years earlier.

It was quite a task to find a publisher for it, and so it languished until the inscrutable author had her first major commercial success with The Autobiography of Alice B. Toklas — a memoir that Gertrude Stein (1874 – 1946) not Alice, had actually written.

The Making of Americans is considered a modernist novel covering the history, progress, and genealogy of the fictional Herlsand and Dehning families. It’s written in Stein’s inimitable and experimental style, one that requires much patience, as it is steeped in excruciating detail and heavy repetition.

In a March 1934 review of The Making of Americans in The Capital Times, the critic captures the difficulties and pleasures of the novel:

“The style is confusing until you get used to it. The words and sentence structures are simple enough yet the odd phrasing and unique combinations of words, the driving repetitions are upsetting to a reader who is accustomed to having things move along in the orthodox fashion.

Yet if you have patience to stick with it, you’ll begin to realize that by this method Gertrude Stein is able to give the reader a sense of human relationships and emotions which are ordinarily intangible and almost impossible to characterize in straightforward prose.

She has said of her own writing that people may not like it, but that her sentences ‘get under their skin.’ And if you’ll subject yourself to an hour or two of Gertrude Stein you will find that this is true.

Don’t try Tender Buttons or Useful Knowledge, which couldn’t possibly make sense for anyone except the person who wrote them, and even that is dubious, but read Three Lives or The Making of Americans, then try to write anything and you’ll find that the Stein Rhythms and repetitions have gotten into your blood.

It’s easy to see why she’s so great an influence upon young writers.”

Excerpt from an analysis of The Making of Americans

The following analysis of The Making of Americans is excerpted in part from Gertrude Stein: Her Life and Work by Elizabeth Sprigge (1957):

There Gertrude Stein sat, making her enormous sentences, a democrat of language, using simple everyday words with a reformer’s urge to emancipate them from the fetters of tradition, association, rhetoric, grammar, and syntax:

She knew them intimately, carried them about with her to caress and meditate upon, “every word I am ever using in writing has for me very existing being,” and each time she found herself using a new one she was disturbed, as when a stranger joins a circle of old friends.

This passion for words was balanced now by her interest in human character, but it could transcend everything. Then words became coins not to be spent in mere meaning, jewels not set for ordinary wear, and she defeated her democratic intention.

And sometimes hypnotized herself, for she had, as she said, a great deal of inertia and did sometimes “stay on with her own methods” because of the pleasure they gave her …

What an extraordinary mixture Gertrude Stein was of vitality fired by the creative struggle, rebelliousness upsetting the comfortable order of things, and an inertia making her unwilling to more from where she was to change what she was doing.

The Making of Americans, The History of a Family in Progress is a stupendous achievement, packed with riches. The matter and method of presenting it were new and important, but the reader is usually defeated by the sheer quantity of words.

Working from charts and diagrams begun at Radcliffe, she started a history “of every one who ever can or is or was or will be living,” in “a space of time that is always filled with moving” — a conception she considered typically American.

One thinks of the cinema, and though Gertrude Stein had not then seen a film, in Lectures in America thirty years later she observed, “any one is of one’s period and this is our period was undoubtedly the period of the cinema and series production.”

She was aware that she had set herself a tremendous task, but she felt it a charge since she had a key to the “bottom nature of men and women.”

So, courageously, she went to it, manipulating language to express the discovery that “every one is always repeating the whole of them.”

There could be, she saw, false repeating, when people went on copying their own or somebody else’s kind of repeating because they were too indolent “to really live inside them their repeating,” but true repeating, which she always found in children, truly expressed a person’s “being existing.”

Repetition could irritate even her who loved it, “loving repeating is one way of being” and it could take a very long time to achieve a complete understanding of a character in this way, “to feel the whole of anyone from the beginning to the ending.” But when this happened, the long labor was rewarded.

For this was her aim, as she explained in her lecture “The Gradual Making of Making of Americans,” to “put down a whole human being felt at one and the same time.”

She was continually discovering more things that had to be said about people and restarting was part of the fugal method, many sentences opening with “To begin then again,” or “As I was saying …”

Building with persistent repetition and wonderfully sustained present principles she analyses a large number of men and women “being living,” based on her relatives, governesses, acquaintances — her characters stem from observation, not invention — and records her discoveries.

She found, for instance, that “loving is a thing that a great many are doing,” and not helped by Freud, years before D.H. Lawrence, wrote in a new way about sex.

Quoting from The Making of Americans is unsatisfactory as each passage reflects and loses depth without it, but as an example of her findings:

She perceived that people were not generally please with others’ ways of loving, but it was part of her own “loving being” to like loving. “Slowly in has come to be in me that any way of being a loving one is interesting and not unpleasant to me.”

… Loving, quarreling, eating, sleeping, washing, listening smelling, breathing, making money, and having religion — interminably the ways of being and doing are explored and analyzed.

She divides people into dependent and independents and independent dependents, “the first having resisting as the fighting power in them, the second have attacking as their natural way of fighting,” and each have their own kind of sensitiveness, their own strength and weaknesses, stupidity and passion, contentment and melancholy.

She conceives of millions of each type of human being that she describes, and description is for her explanation. All the characters are American, “the old people in a new world, the new people made out of the old … for that is what really is and what I really know.”

It was part of her strength, her sincerity and singleness of mind, to keep to what she really knew and one of the problems was to find a way of making what she knew come out as she know it and “not as remembering.”

“I was faced by the trouble that I had acquired all this knowledge gradually but when I had it I had it completely at one time.” She was bent on expressing the sense of immediacy.

… “Disillusionment in living,” Gertrude Stein wrote later, “is the finding out nobody agrees with you not those that are and were fighting with you,” and she reflects how much desire and how much courage anyone must have to do something new.

More about The Making of Americans by Gertrude Stein