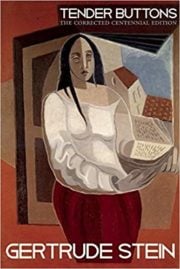 Tender Buttons by Gertrude Stein (1874 – 1946) is this gloriously perplexing author’s absurdist collection of prose-poems — if you want to call them that. Critics have long been divided as to whether this 1914 book is a brilliant compilation of cubist literature or Stein’s intentional prank on the reading public.

One of Stein’s earliest published works, Tender Buttons is an experiment in language, her attempt to “create a word relationship between the word and the things seen.” Since Stein was so much the self-proclaimed genius, it’s doubtful she would have created this slim volume purely as a joke.

In the intervening years since its publication, Tender Buttons has either been praised as a masterpiece of cubist literature or dismissed as utter gibberish.

Poetry scholar Marjorie Perloff, in the essay “The Difference is Spreading,” wrote that Stein “does not give us an image, however fractured, of a carafe on a table; rather. she forces us to reconsider how language actually constructs the world we know.”

Following are two original reviews of Tender Buttons from when it was first published in the summer of 1914. Both exhibit baffled bemusement at what was described as literary cubism, but neither can disguise a fair amount of entertainment from this first published work by the eminent Gertrude Stein.

From the original review and excerpt in The Chicago Tribune, June 5, 1914: Tender Buttons is the most recent product of Miss Gertrude Stein, the literary Cubist. Miss Stein, an affluent American residing in Paris, has been for years the high priestess of the new artists, the Cubists and Futurists, and her home is an amazing museum of their baffling output.

Her own gyrations with words have been printed before but privately. Tender Buttons is the first volume to be vouchsafed the public.

In it, Miss Stein ventures further than ever before. The final shackle to be struck from context, each unit of the sentence stands out independent and has no commerce with its fellows. It is a nightmare journey in unknown and uncharted seas.

Miss Stein’s followers believe she has added a new dimension to literature; scoffers call her writing a mad jumble of words, and some of them suspect she is having a sardonic one at the expense of those who profess to believe in her.

Tender Buttons is a sort of trilogy on “Objects,” “Food,” and “Rooms.” It is not clear whether the “tender” of the title means a rowboat, a fuel car attached to a locomotive, or is an expression of humane emotions. 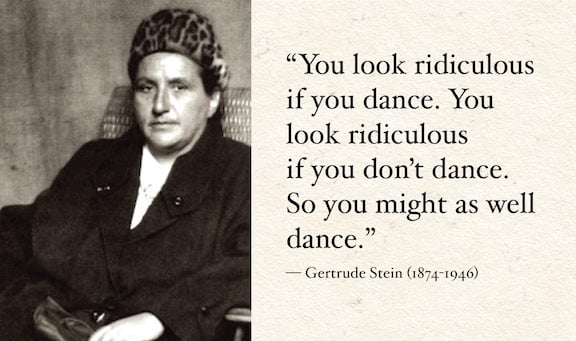 We do not know what “Tender Buttons” means

From the original review in The Pittsburgh Daily Post, July 4, 1914: Cubism in literature would seem to transcend all the bounds of possibility. Yet the work of Gertrude Stein reveals with almost stunning obviousness that the forward movement is not confined to painting.

Tender Buttons is said to be Gertrude Stein’s first book in the new idiom to be published in America. Parenthetically it might be well to remark that we do not know what “Tender Buttons” means.

To be quite frank the first emotion one experiences on reading Gertrude Stein is amusement. When, under the title “Cold Climate,” one reads “A season in yellow sold extra strings makes lying places,” one can only laugh heartily at what appears to be errant nonsense, unless one is enraged at the thought that one is being made sport of.

Gertrude Stein has not deigned, we believe, to make any explanation of her work. From her work we know only this: that no word, seemingly, has any connection with any other; and that literal meaning is avoided.

Dimly we seem to have heard that she simply writes what words come into her mind in connection with the impression of a certain object. In this case to see meaning in these strange rambling, impossible sentences would seem to be like turning one’s back upon the key to them.

To seek impressions of the bare words and their individual suggestions would seem less futile. Yet this method yields only scant results. Undeniably, however, something is conveyed by following, the first — shall we say impression? — in the book. How much depends upon the imaginative powers of the reader.

A CARAFE, THAT IS A BLIND GLASS.

A kind in glass and a cousin, a spectacle and nothing strange a single hurt color and an arrangement in a system to pointing. All this and not ordinary, not unordered in not resembling. The difference is spreading.

Read the rest of the first portion of Tender Buttons, “Objects” here.

Tender Buttons by Gertrude Stein (the centennial edition) on Amazon