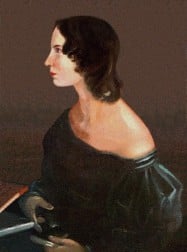 Emily Brontë (1818 – 1848) is best remembered for her haunting and passionate novel Wuthering Heights, but she has also been recognized as a brilliant poet. Among the three sisters, Emily Brontë’s poetry has been acknowledged as more skillful and moving than that of Charlotte or Anne.

In the mid-1840s, Charlotte discovered a stash of Emily’s poems and recognized the genius in them. She undertook the task of finding a home for a collaborative book of poems by herself and her two sisters.

The book, dryly titled Currer, Ellis, and Acton Bell’s Poems was published in 1846 to absolutely no fanfare and humiliating sales of two copies. Charlotte described their efforts in the Biographical Notice of Ellis and Acton Bell, 1850.

Undeterred, Charlotte led the charge to find publishers for what were to become some of the landmark works of fiction in the English language.

Emily Brontë’s poetry has been admired and reappraised for quite some time. Following is a portion of one such insightful analysis of her poetical work by Mary Robinson, from the 1883 biography, Emily Brontë. You can link to the full article at the end of this post.

No one in the house ever saw what things Emily wrote in the moments of pause from her pastry-making, in those brief sittings under the currants, in those long and lonely watches for her drunken brother. She did not write to be read, but only to relieve a burdened heart.

“One day,” writes Charlotte in 1850, recollecting the near, vanished past, “in the autumn of 1845, I accidentally lighted on a manuscript volume of verse in my sister Emily’s handwriting. Of course I was not surprised, knowing that she could and did write verse.

I looked it over, and something more than surprise seized me, — a deep conviction that these were not common effusions, not at all like the poetry women generally write. I thought them condensed and terse, vigorous and genuine. To my ear, they had also a peculiar music, wild, melancholy and elevating.”

Very true; these poems with their surplus of imagination, their instinctive music and irregular rightness of form, their sweeping impressiveness, effects of landscape, their scant allusions to dogma or perfidious man, are, indeed, not at all like the poetry women generally write. The hand that painted this single line …

The dim moon struggling in the sky,

… should have shaken hands with Coleridge, the voice might have sung in concert with Blake that sang this single bit of a song:

Hope was but a timid friend;
She sat without the grated den,
Watching how my fate would tend,
Even as selfish-hearted men.

“She was cruel in her fear;
Through the bars, one dreary day,
I looked out to see her there,
And she turned her face away!

Had the poem ended here it would have been perfect, but it and many more of these lyrics have the uncertainty of close that usually marks early work.

Often incoherent, too, the pictures of a dream rapidly succeeding each other without logical connection; yet scarcely marred by the incoherence, since the effect they seek to produce is not an emotion, not a conviction, but an impression of beauty, or horror, or ecstasy.

The uncertain outlines are bathed in a vague golden air of imagination, and are shown to us with the magic touch of a Coleridge, a Leopardi—the touch which gives a mood, a scene, with scarce an obvious detail of either mood or scene.

We may not understand the purport of the song, we understand the feeling that prompted the song, as, having done with reading ‘Kubla Khan,’ there remains in our mind, not the pictured vision of palace or dancer, but a personal participation in Coleridge’s heightened fancy, a setting-on of reverie, an impression.

Enough of thought, philosopher,
Too long hast thou been dreaming
Unlightened, in this chamber drear,
While summer’s sun is beaming!
Space-sweeping soul, what sad refrain
Concludes thy musings once again?

Oh, for the time when I shall sleep
Without identity,
And never care how rain may steep,
Or snow may cover me!
No promised heaven, these wild desires
Could all, or half fulfil;
No threatened hell, with quenchless fires,
Subdue this quenchless will!

So said I, and still say the same;
Still, to my death, will say—
Three gods, within this little frame,
Are warring night and day;
Heaven could not hold them all, and yet
They all are held in me,
And must be mine till I forget
My present entity!
Oh, for the time, when in my breast
Their struggles will be o’er!
Oh, for the day, when I shall rest,
And never suffer more!

I saw a spirit, standing, man,
Where thou dost stand an hour ago,
And round his feet three rivers ran,
Of equal depth, and equal flow
A golden stream, and one like blood,
And one like sapphire seemed to be;
But, where they joined their triple flood
It tumbled in an inky sea.
The spirit sent his dazzling gaze
Down through that ocean’s gloomy night
Then, kindling all, with sudden blaze,
The glad deep sparkled wide and bright—
White as the sun, far, far more fair,
Than its divided sources were!

And even for that spirit, seer,
I’ve watched and sought my life-time long;
Sought him in heaven, hell, earth and air—
An endless search, and always wrong!
Had I but seen his glorious eye
Once light the clouds that ‘wilder me,
I ne’er had raised this coward cry
To cease to think, and cease to be;
I ne’er had called oblivion blest,
Nor, stretching eager hands to death,
Implored to change for senseless rest
This sentient soul, this living breath—

Oh, let me die — that power and will
Their cruel strife may close;
And conquered good, and conquering ill
Be lost in one repose! 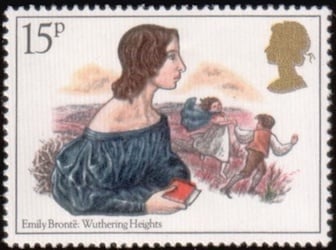 You may also enjoy: No Coward Soul is Mine: 5 Poems by Emily Brontë

Some semblance of coherence may, no doubt, be given to this poem by making the three first and the last stanzas to be spoken by the questioner, and the fourth by the philosopher.

Even so, the subject has little charm. What we care for is the surprising energy with which the successive images are projected, the earnest ring of the verse, the imagination which invests all its changes. The man and the philosopher are but the clumsy machinery of the magic-lantern, the more kept out of view the better.

“Conquered good and conquering ill!” A thought that must often have risen in Emily’s mind during this year and those succeeding. A gloomy thought, sufficiently strange in a country parson’s daughter; one destined to have a great result in her work.

Of these visions which make the larger half of Emily’s contribution to the tiny book, none has a more eerie grace than this day-dream of the 5th of March, 1844, sampled here by a few verses snatched out of their setting rudely enough:

On a sunny brae, alone I lay
One summer afternoon;
It was the marriage-time of May
With her young lover, June.

The trees did wave their plumy crests,
The glad birds carolled clear;
And I, of all the wedding guests,
Was only sullen there.

Now, whether it were really so,

I never could be sure,
But as in fit of peevish woe,
I stretched me on the moor,

Methought, the very breath I breathed
Was full of sparks divine,
And all my heather-couch was wreathed
By that celestial shine!

And, while the wide earth echoing rung
To their strange minstrelsy,
The little glittering spirits sung,
Or seemed to sing, to me.

What they sang is indeed of little moment enough — a strain of the vague pantheistic sentiment common always to poets, but her manner of representing the little airy symphony is charming.

It recalls the fairy-like brilliance of the moors at sunset, when the sun, slipping behind a western hill, streams in level rays on to an opposite crest, gilding with pale gold the fawn-coloured faded grass; tangled in the film of lilac seeding grasses, spread, like the bloom on a grape, over all the heath; sparkling on the crisp edges of the heather blooms, pure white, wild-rose colour, shell-tinted, purple; emphasizing every grey-green spur of the undergrowth of ground-lichen; striking every scarlet-splashed, white-budded spray of ling:

An iridescent, shimmering, dancing effect of white and pink and purple flowers; of lilac bloom, of grey-green and whitish-grey buds and branches, all crisply moving and dancing together in the breeze on the hilltop. I have quoted that windy night in a line:

The dim moon struggling in the sky.

And oh, how slow that keen-eyed star
Has tracked the chilly grey;
What, watching yet! how very far
The morning lies away.

Such direct, vital touches recall well-known passages in Wuthering Heights: Catharine’s pictures of the moors; that exquisite allusion to Gimmerton Chapel bells, not to be heard on the moors in summer when the trees are in leaf, but always heard at Wuthering Heights on quiet days following a great thaw or a season of steady rain.

But not, alas! in such fantasy, in such loving intimacy with nature, might much of Emily’s sorrowful days be passed. Nor was it in her nature that all her dreams should be cheerful.

The finest songs, the most peculiarly her own, are all of defiance and mourning, moods so natural to her that she seems to scarcely need the intervention of words in their confession.

The wild, melancholy, and elevating music of which Charlotte wisely speaks is strong enough to move our very hearts to sorrow in such verses as the following, things which would not touch us at all were they written in prose; which have no personal note. Yet listen:

Death! that struck when I was most confiding
In my certain faith of joy to be
Strike again, Time’s withered branch dividing
From the fresh root of Eternity!

Leaves, upon Time’s branch, were growing brightly,
Full of sap, and full of silver dew;
Birds beneath its shelter gathered nightly;
Daily round its flowers the wild bees flew.

Solemn, haunting with a passion infinitely beyond the mere words, the mere image; because, in some wonderful way, the very music of the verse impresses, reminds us, declares the holy inevitable losses of death.

Read the rest of this analysis on Wikisource, excerpted from Emily Brontë by Mary Robinson, 1883 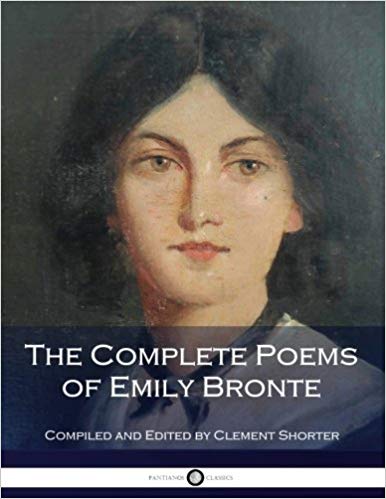 The Complete Poems of Emily Brontë on Amazon*